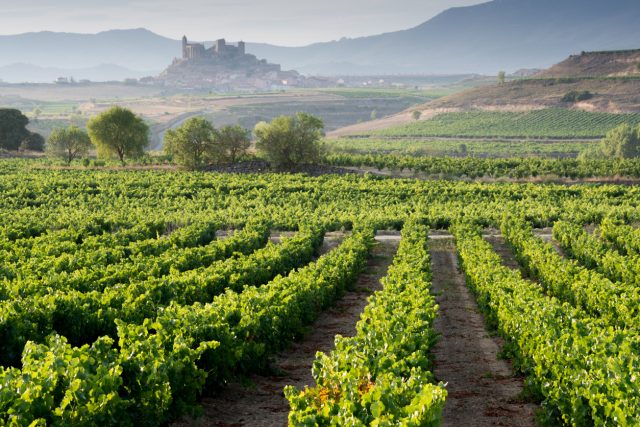 
A rolling, bucolic autonomous region of Spain wedged between Castile and León, the Basque Country, and Navarre, diminutive La Rioja is known throughout the world as this country’s most famous wine region, particularly noted for its luxuriously full-bodied, oak-aged reds. Please join me here, won’t you on a quick tour? It will enchant not just oenophiles but also lovers of history, culture, and ecotourism/adventure!

Founded as Vareia during the centuries of ancient Roman colonisation of the Iberian Peninsula and part of New Castile until 1980, this stately small city (pop. 151,000) on the Ebro River is known especially for its tapas bars, burgeoning culinary scene in general, and of course wine bodegas and other venues. Among the highlights of Logroño’s cobblestone-paved old town – especially connected to its history beginning in the 11th century as a major stop on the Way of St. James pilgrimage route to Santiago de Compostela – are the 12th-century Puente de Piedra (Stone Bridge); the Revellín section of the mediaeval city walls; the Rúa Vieja, lined with landmarks such as the Baroque Albergue de Peregrinos (Pilgrims’ Shelter), the Fuente Los Peregrinos (Pilgrims’ Fountain), and the monumental 16th-century Church of Santiago, home to the image of the city’s patron saint, the Virgen de la Esperanza (Our Lady of Hope).

Other must-sees include a trio of Logroño’s many other churches: the Baroque Cathedral of Santa María la Redonda, built in the 15th to 18th centuries and harbouring some remarkable sculptural work (including a painting of the crucifixion of Christ attributed to the legendary Italian maestro Michelangelo); Santa María del Palacio (12th-13th centuries), whose Gothic spire dominates the skyline and which holds Romanesque art and magnificent cloisters; and the 12th-century Church of San Bartolomé, with its Mudéjar (Muslim-influenced) tower and exquisitely sculptured Romanesque façade.

Rub shoulders with the local logroñeses on thoroughfares such as the stately, 19th-century Paseo del Espolón and squares like the lively Plaza del Mercado (site of the cathedral along with many of the aforementioned tapas bars and other cafés/restaurants/watering holes) and check out a handful of museums, most notably the Museo de la Rioja, presenting a great overview of regional history, culture, and archaeology dating back to prehistory.

And of course there’s a lot here to appeal to winos, starting with the extensive lists of local vintages at virtually every bar, café, restaurant, and wine shop. The Centro de la Cultura de Rioja is currently closed for renovation, but the Museo-Bodega Otañón (run by the eponymous winery, see below) offers a marvelous mix of art relating to wine as well as wine tasting, and right across the Ebro you can visit one of the other major local wineries, Bodegas Franco-Españolas (founded in 1890 and one of the region’s largest).


For me one of Spain’s more fascinating towns, a half hour’s drive west of Logroño, this became as of the 11th century the last major stop of the Way of St. James in La Rioja (in fact, de la Calzada means “of the Way”, and to this day its historic old town retains much of its Middle-Ages flavour, centring around the early-13th-century Cathedral of San Salvador. In here you’ll find perhaps one of the most unusual cathedral “amenities” anywhere: an ornately tarted-up cage up on the wall near the entrance featuring two live chickens. This is a reference to the legend of a young German pilgrim unjustly hanged for theft yet who survived the ordeal, and two roasted chickens which came back to life on the local bishop’s table to mark the miracle. Other landmarks in Santo Domingo include its thick mediaeval city walls; the Casa de la Cofradía del Santo, a Renaissance building housing the main (and modernised) pilgrims’ hostel; and the Parador de Turismo, one of Spain’s network of quasi-public inns housed mostly in historic buildings – this one a former pilgrims’ hospital built in the 12th century.

It’s also worth timing your visit to coincide with one of a trio of colourful local events. From late April through mid-May, there a various processions and fiestas held during the Way-themed Festival del Santo. In mid-August there’s a spectacle in the Plaza de España about “the miracles of Santo Domingo” (St. Dominic, the forest hermit responsible for building the town into what it is). And in early December a mediaeval market is held in several of the old town’s squares. 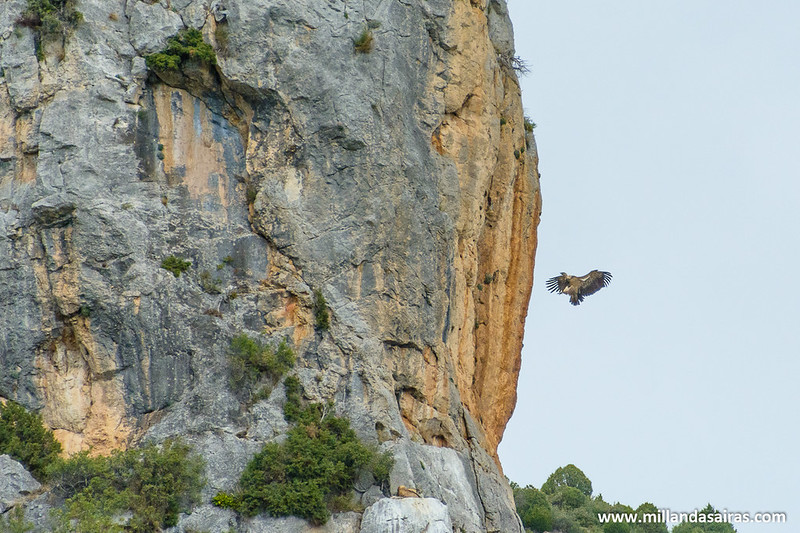 
In a country abounding with astounding nature, La Rioja can lay some particularly impressive claims, such as one of its most greatest examples of glacial landscape in the  236-square-kilometre (91-sq.-mile) Sierra de Cebollera Nature Reserve about an hour south of Logroño, is home to one of the greatest examples of glacial scenery in the peninsula – including Cebollera peak, 2,164 metres (7,080 feet) high – and offers fantastic hiking as well as an informative visitors’ centre.

Other natural wonders include the Sotos del Ebro Nature Reserve, a particular draw for birders, where apart from Europe’s largest colony of white storks you can also spot herons, blackbirds, and kingfishers; and just a few kilometres away, Arnedillo, a UNESCO Biosphere Reserve where the star is the Mirador de los Buitres (above), where you can see griffon vultures in flight from up close.

Plus would you believe skiing/snowboarding? Valdezcaray winter resort, also under an hour from Logroño – and barely a 15-minute hop south Santo Domingo de la Calzada, offers 22 pistes for all abilities, between 1,530 and 2,125 m (5,020-6,972 ft.), along with full après-ski/snowboard amenities.

I’ve saved what some might consider the best for last. The rolling, bucolic La Rioja wine region covers some 540-sq.-km (208-sq.-mi.), also bringing in southern bits of Navarre and the Basque Country. It’s divided into three subregions: Rioja Alta (producing lighter, fruitier wines), Rioja Alavesa (fuller bodied and with higher acidity), and Rioja Baja (dark and potent, often with an especially high alcohol content). In addition to the above mentioned Bodega Otañón and Bodegas Franco-Españolas, dozens more wineries open their doors to day and sometimes overnight visitors. The most internationally high-profile is 158-year-old Marques de Riscal in the town of Elciego (a half hour from Haro and just 20 minutes or so from Logroño) – not just because its wine is among the most exported, but because for the past dozen years it has had its profile raised even further by a futuristic annex designed by starchitect Frank Gehry in his signature style. Another worth a particular mention is Vivanco in Briones, just outside Haro, with an engaging museum of wine and culture.