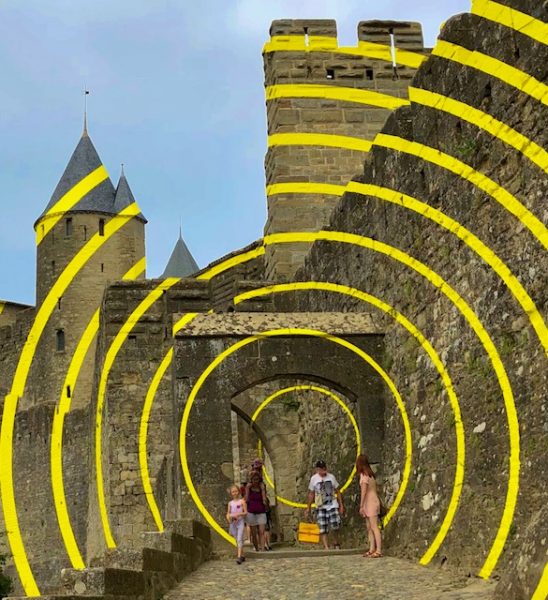 On a recent swing through the south of France, I was thrilled to fulfill a long held dream of visiting several of the romantic, atmospheric walled towns in the hills inland from the Mediterranean coast. There are actually dozens, of course – you could spend months visiting all of them. But here’s my tastiest trio:

A UNESCO World Heritage Site, the fortified hilltop Cité of this Occitanie city of about 50,000 a short drive/train ride east of Toulouse is about as classic a walled city as you could ever hope to find (and in fact, also Europe’s largest), with two layers of doughty walls and more than 50 bastions and barbicans. Dating back more than 3,000 years (its name derived from the Celtic Carcas), much of the mediaeval city we see today started to take shape around the 12th century. We visited spots including the keep and parts of the ramparts, as well as churches such as the early-12th-century, Gothic-Romanesque Basilique des Saints Nazaire et Celse (its stained-glass windows reminiscent of Notre Dame de Paris) and 13th-century Saint-Michel Cathedral.  As for the rest of the experience, once we got into these cobblestone streets, unfortunately, we found them thronged with hundreds of tourists and shops selling tourist tat (we found them much less crowded and more atmospheric at night). In the photo at top, by the way, the fluorescent yellow stripes were up for much of 2018 to mark the 20th anniversary of its UNESCO listing.

The farthest of the five from the coast – two hours north of Toulouse in the Dordogne region – this town of barely 700 souls clings to cliffs some 120 metres (390 feet) over the Alzou River. Flights of steps ascend from the lower town to the churches, a group of massive buildings half-way up the cliff. The chief of them is the pilgrimage church of Notre Dame (its current form dating from 1479), containing the cult image at the centre of the site’s draw, a wooden Black Madonna supposedly carved by Saint Amator (Amadour) himself. Below, the pilgrimage church opens onto a terrace where pilgrims could assemble, where there is a broken sword said to be a fragment of Durandal, once wielded by the epic hero Roland.  Nearby are the small, 12th-century church of Saint-Michel and the Saint-Sauveur Basilica, built between the 11th and 13th centuries, its interior covered with paintings and inscriptions recalling the pilgrimages of notable personages including kings and queens of France and England. The subterranean church of Saint-Amadour (1166) extends beneath St Sauveur and contains relics of the saint. On the summit of the cliff stands the château built in the Middle Ages to defend the sanctuaries. Like Carcassonne, rather touristy these days but still highly evocative. 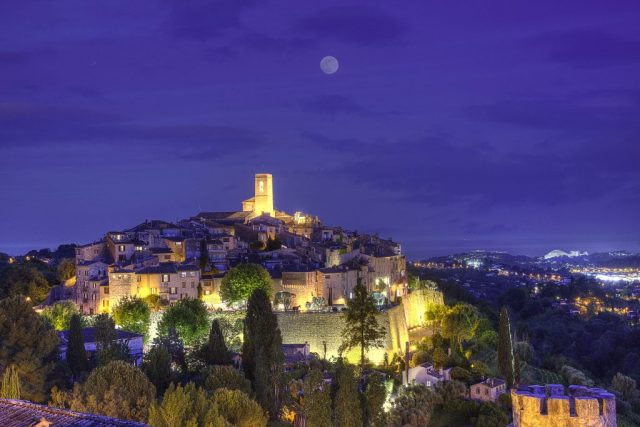 A half hour north of Nice, one of the French Riviera’s oldest hill towns dates back to Roman times, and acquired the special mystique it enjoys today thanks to being discovered in the mid-20th century by artists such as Pablo Picasso, Marc Chagall, and Henri Matisse, who came here frequently for inspiration and were joined by the likes of Jean-Paul Sartre, Yves Montand, Simone Signoret, and Jacques Prévert (U.S. writer James Baldwin even breathed his last here, in 1987), sometimes buying property, or more often staying at the Colombe d’Or Hotel.  Much smaller than Carcassonne or Rocamadour, its narrow cobbled streets have their share of tourists, but the artistic legacy is also apparent in the many modern-art galleries; annual cultural festivals; and the nearby Fondation Maeght, founded in 1962 and home to some phenomenal 20th-century masterpieces from artists including Chagall, Georges Braque, Alexander Calder, Alberto Giacometti, Wassily Kandinsky, and Joan Miró, along with temporary exhibitions of cutting-edge contemporary works. Actual historic “sights” are fairly modest (such as a small museum about the town’s history and the modest La Collegiale church, also adorned these days with modern art); the allure lies in drinking in the vibe both mediaeval and arty.