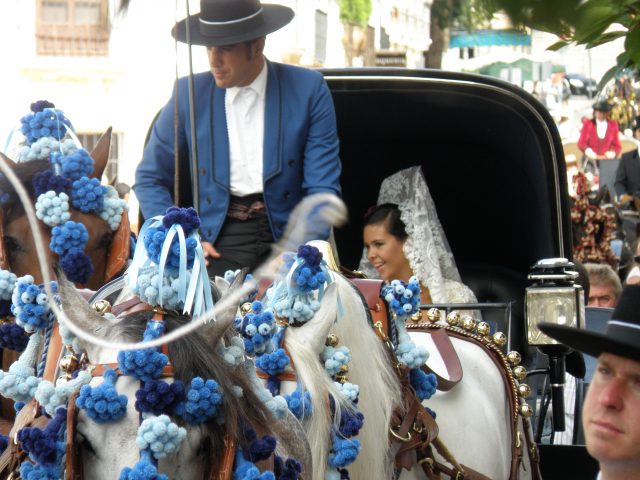 In the city of Ronda, in Andalusia‘s Málaga province, the biggest festival of the year is kicking off today – actually a cultural event of national importance, attracting celebrities (some helicoptering in!), and politicians as well as ordinary folks from all over the world.

But even without festivities, Ronda is a place that grips and holds you long after you have left. How could you ever forget the awe-inspiring El Tajo gorge, plunging 100 metres (328 feet) down to the Guadalevin River which divides the city.  But that’s not all – a trio of  bridges connect the older with the newer part of Ronda, all affording great views over the river and rooftops.

Like all of southern Spain, Ronda has a very long and colourful history, from Iberian origins to Islamic Moorish caliphates and the Christian monarchs who followed them. The many civilisations which passed through have left their marks in culture and buildings which still grace the streets. From the mediaeval Moorish city walls and “Arab bath house” to the Marques de Salvatierra Palace, the Casa Bosco with its terraced gardens (from which you get the only view of the Tajo gorge in its entirety), to a wine museum and Spain’s oldest bullring – plus a menu of fabulous tapas and Andalusian delicacies – Ronda leaves a rousing impression.

It’s therefore no surprise, that famous artists such as U.S. writer Ernest Hemingway, director Orson Welles, and German poet Rainer Maria Rilke spent time in Ronda, seeking and finding inspiration for their work. Rilke took a room in the Hotel Reina Victoria which to this day remains as he left it and is a mini Rilke museum. 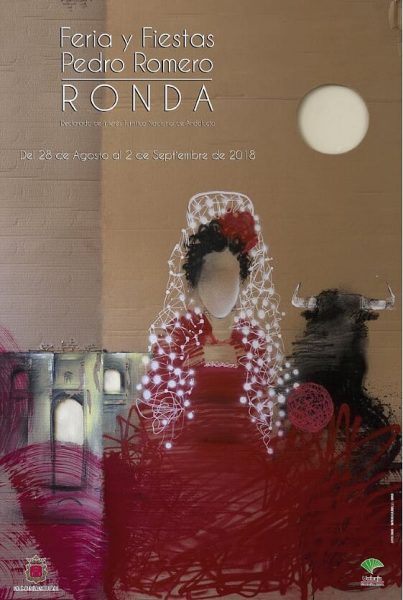 With this movie-set background, today begins the city’s Feria y Festivales Pedro Romero (also known as the Feria Goyesca), a mixture of Andalusia’s bullfighting tradition and the celebration of the style and fashion of the early 19th-century of painter Francisco Goya, one of Spain’s most famous artists. Among other things, Goya is known for his detailed portraits of aristocratic women decked out in the elaborate silk and lace dresses of the day. It seemed therefore appropriate to base the outfits of the bullfighters and all the attending guests and spectators on the designs reflected  by the master – thus the name Fiesta Goyesca.

Now, you may be adverse to bullfighting (as am I), but there is no denying that it’s an important part of Spanish history and culture. And nowhere more so than in Ronda; Pedro Romero was born here in 1754 to an old bullfighting family and “invented” the tradition of the lone matador facing the bull on foot. He also refined techniques and entered the bullring dressed in the magnificent traje de luz (suit of lights) inspired by the work of Goya.

The Feria Romero is actually of relatively recent vintage, started in 1954 in honour of Romero. Before bullfight-haters turn away, let me tell you that the actual bullfight is only a part of the spectacular festivities and attendance is certainly not required to enjoy the spectacle. The magic of the festival are the horse drawn carriages, richly decorated and the people, especially the Goyesca ladies, who sit in the carriages or parade around the streets in the most elegant and richly embroidered period dresses – predominantly in colours of black and white as well as red and black with tassels (it’s not only the competitors – every woman who can afford it dresses like they have stepped out of a Goya painting). The bullfighters wear similar outfits too – often updated for the times (Georgio Armani created a special traje de luz in techno satin for matador Cayetano Rivera Ordóñez in 2009).

There are several activities before and after the 1 September bullfight, including theatre performances; flamenco festivals; the presentation of the Goyesco ladies, who participate in the parade and strive to win the coveted “Silver Madroñera” award for best costume; and above all the daytime activities in the 1784 bullring, with a competition for the best turned out carriages and horses. 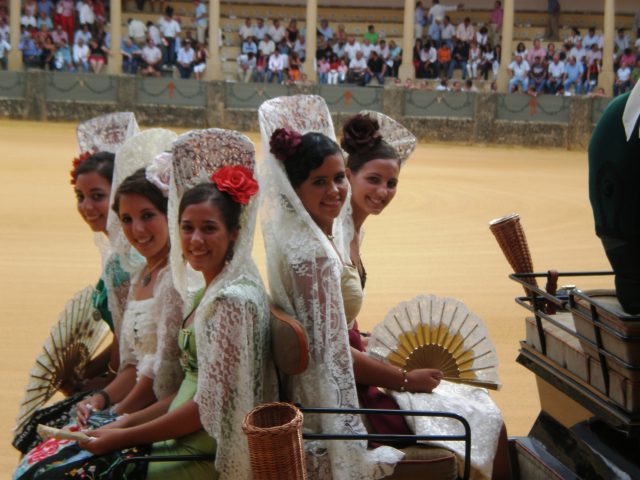 24-26 of August: the Gala Folclórica Internacional, with dance and music performances from Spain and other countries.

26 August: the Fiesta Flamenca, dedicated to flamenco only.

28 August: the Cabalgata, a show of horses and carriages.

29-30 August: Competition and show of horses and riding, including dressage.

2 September: A morning show of carriages and competition of the Goyesca ladies.

Add to this music everywhere, along the delicious food of Andalusia and wines prominently including sherry from fellow Andalusian city Jérez de la Frontera, and you’ll understand why this is one of the most important cultural events in the South of Spain. If you’re a Spain- and/or local-cultures-lover, do consider putting this on your agenda for late August 2019!