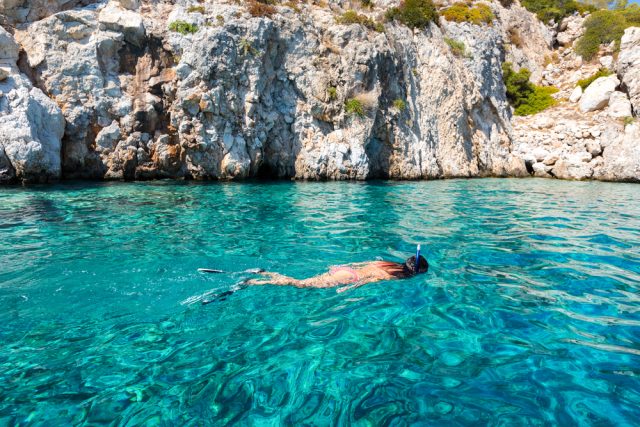 Even more than for its spectacular ancient ruins and vibrant capital, Greece is popular for its many, many beautiful, beachy islands. But these present their own challenges to would-be visitors. There are 227 inhabited isles to choose from, and spread out over 7,500 square kilometres (2,896 sq. miles), with not all reachable by air, and ferry journeys out of Athens‘ port of Piraeus lasting up to 5 hours (such as lovely little Symi out in the Dodecanese Islands).

But it’s also possible to enjoy a lovely Greek-island getaway close in to the mainland – a crossing of just an 40 to 90 minutes via high-speed ferry out of Piraeus. Welcome to the Saronic Islands!

Located in the Saronic Gulf, near the northern tip of the Peloponnese, this archipelago is sheltered from the wind, allowing for a stable year-round ferry schedule, and a half dozen have become popular with Greeks themselves for quick getaways and holiday homes, especially the following four: 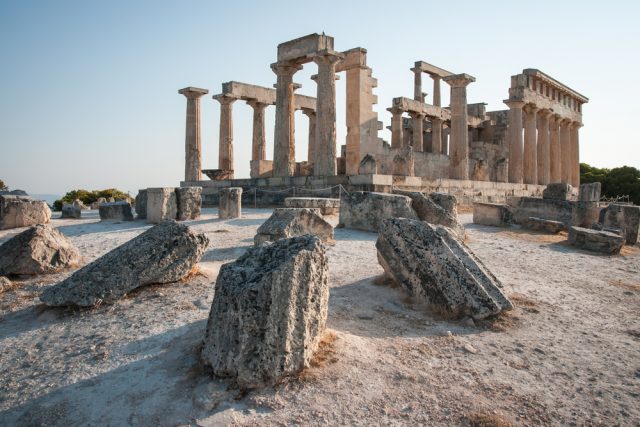 Just 40 minutes out by ferry, just over 87 square kilometres (34 sq. miles) and with a population of just over 8,900, The seafood tavernas and café life of Aegina Town and other laid-back villages – along with small, charming pebbly beaches, impressive archaeological sites, and early-20th-century monastery – are a fetching lure for Greeks and foreigners alike. The accommodation menu here features no big, mass-tourism resorts, ranging instead from small family-run pensions to small boutique hotels.

The most prominent of those archaeological sites is the Doric Temple of Aphea Athena, dating to 500 BC and one of three Greek sites – along with the Parthenon and Sounion‘s Temple of Poseidon – which make up the “holy triangle” of Greek antiquity; you can see many of its sculptures and artifacts at the local archaeological museum.  Much newer (just 108 years old), the Greek Orthodox Monastery of St. Nektarios (one of the largest in the Balkans) is also not to be missed due to its architectural magnificence.

For beaches you’re after, head to the therapeutic waters of Souvala, a fishing village in the north, where thermal hot springs are reputed to help with rheumatism and dermatological problems.  Another of my favourites is tiny Portes, with a pebbly beach and taverna offering stunning views.

Fun fact: from 1827 to 1829 Aegina Town was the temporary capital of the newly formed Kingdom of Greece. 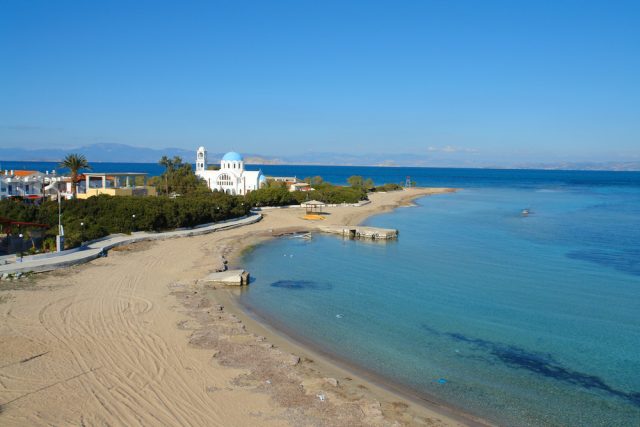 
An islet 55 minutes from Piraeus, located between Aegina (ten minutes away) and the famous amphitheater village of Epidavros on the mainland Peloponnese, this is Aegina’s little sister, just over 13 sq. km (five sq. mi.) and with just over 1,100 permanent residents divided among four villages.  As you arrive into the largest, the port of Skala (also the site of most of the island’s tourist facilities), it’s hard to miss the prominent Church of Agioi Anargyroi with its blue dome, similar to those found on Santorini island. Here you’ll find a beach with umbrellas as well as many tavernas and bars to choose from, either or livelier – you’re spoilt for choice.

Its accommodation also tending toward small pensions and family hotels, Agistri offers seven sandy beaches as well as swimming from rocky platforms, along with activities such as sea kayaking, biking, and horseback riding. Truly a wonderfully outdoorsy, low-key destination. 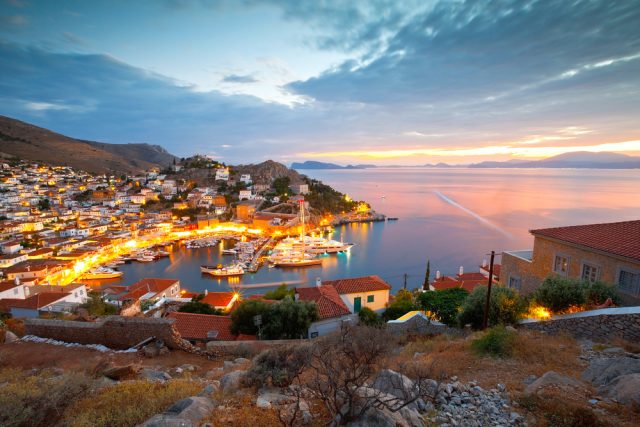 On possibly one of the most popular islands in the Saronics – 50 sq. km (19 sq. mi.), pop. just under 2,000 – no vehicles are allowed (except fire and refuse trucks and the like), and life involves navigating your way through cobbled streets and using donkeys or mules to help transport your luggage. Though something of a yachtie mecca, Hydra isn’t particularly well known for its beaches, but there are seven pretty nice ones, and you can swim in rocky bays and take water taxis to hidden coves.

The main attraction, though, is its towns and Hydra Port – originally built during a period of prosperity largely gained from piracy – has been restored and preserved exactly as it was in the 1800’s. The Venetian-style architecture of the buildings (it was ruled by the Republic of Venice from 1204 to 1566), which looks as if they’re spilling from the hills into the sea stands out immediately, with many churches as well as mansions once belonging to ship owners or sea captains.  The magnificent building immediately at the harbour’s entrance is the Historical Archives Museum – a stone mansion built in 1918 by shipowner Gikas Koulouras and renovated in 1996. Other spots worth seeing include myriad Orthodox churches and monasteries such as Profitis Ilias, founded in the 10th century; the Ecclesiastical and Byzantine Museum,  the local branch of the National Historical Museum; and the Museum of Post-Byzantine Art and History.

Creatives including singer/songwriter Leonard Cohen formed an artists’ colony here (Cohen wrote Bird on the Wire and other songs at his home here). And you, too, will be inspired by Hydra – kind of a quieter, more peaceful alternative to Mykonos. Its lack of airport makes it a non-package holiday destination, and with its boutique hotels and cultural exhibitions and events in the summer months at the Hydrama Arts Centre and other venues – along with galleries and the Deste Foundation museum – this is the perfect Saronic island for those looking for culture and style. 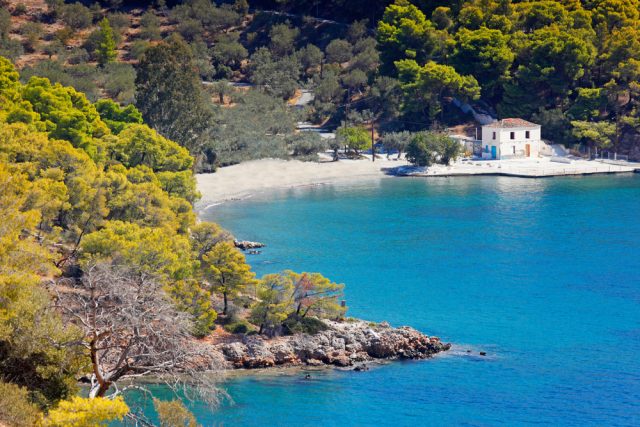 Really a pair of islands, Poros is located a little farther out (up to 2½  hours from Piraeus), and as you pull into port, you’ll see the harbour built “amphitheatrically”  – curved and rising to overlook the water. It’s lined with the ubiquitous Greek coffee shops, tavernas, bars, and souvenir shops.  But unlike other Saronic islands, Poros (just over 49.582 sq. km/19 sq. mi., pop. around 4,000 ) is quite green, dotted with pine trees and a few notable bays to swim/sun at, such as Askeli, surrounded by pine trees and with organised water sports, and Vagionia, a smaller, pebbly beach.

Even less touristy than the other Saronics, in addition to a dozen lovely beaches Poros offers a handsome neoclassical main town, along with a number of cultural sites/landmarks such as the old navy base, established in 1827 during the Greek War of Independence; the Clock Tower, poised atop a rocky summit overlooking the port and surrounding Saronic Gulf, is the local equivalent of Big Ben and a great place to walk up to for sunset views and pictures; the 6th-century-BC Temple of Poseidon (many of whose finds are exhibited at the island’s archaeological museum), several Orthodox churches and monasteries, and a Shell Museum.

In 1939, the famed American novelist Henry Miller wrote, “Coming into Poros gives the illusion of the deep dream. Suddenly the land converges on all sides and the boat is squeezed into a narrow strait from which there is no egress. The men and women of Poros are hanging out of the windows just above your head. You pull in right under their frosty nostrils, as though for a shave and a haircut en route. The loungers on the quay are walking with the same speed as the boat. They can walk faster than the boat if they choose to quicken their pace.” It can be said that maybe not all that much has changed here since then.

Rebecca Hall is a novelist and travel writer who divides her time between the UK and Greece. She has written for Rough Guide books and contributed to numerous publications including Let’s Go for RyanAir and Daily Telegraph travel. Her debut novel, Girl Gone Greek, is now an award-winning script (awarded Best Script at the 2018 London Greek Film Festival).