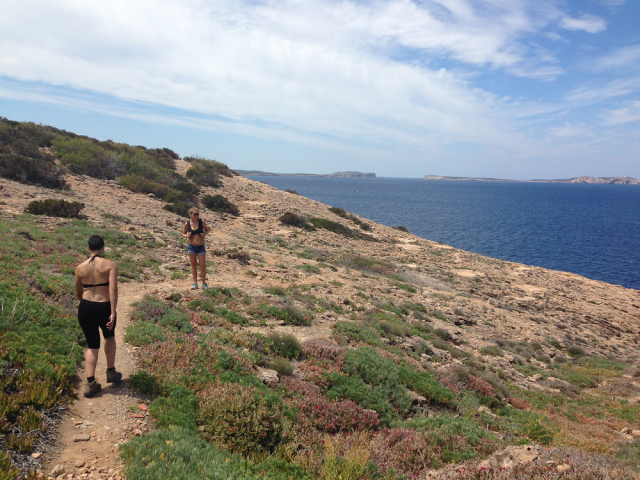 Before it got crazy-famous for being Europe’s foremost “party under the sun”,  the third largest of Spain’s four Balearic Islands was a quiet place of pretty, traditional villages and natural landscapes of rolling hills, winding coastline dotted with coves and half-moon beaches, cool pine forests, and scattered cases pageses, traditional Ibizan farmhouses.

And the thing of it is, all of that is still here in Ibiza, and continues all year round after the holiday season comes to a close in October and before reigniting the following July. In fact, I’ve found that the late fall, winter, and spring are the best times for hikers, cyclists, kayakers, and other lovers of nature and the great outdoors – once the heat abates and the blazing Mediterranean sun softens to a warm glow.  And to take full advantage, the island is packed with hiking routes. Though nearly any spot on the island provides adventure and views that’ll make you cancel your return ticket, here are my top trio of favourites (and several island tour operators will get you out there if you’re not inclined to go on your own): 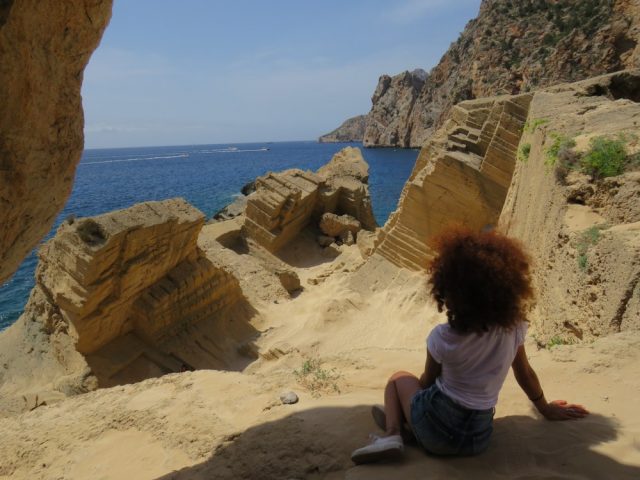 Out on the west coast, just a quick drive west from Ibiza’s capital Eivissa, Sant Josep de sa Talaia is a cute, whitewashed town in the foothills of the island’s highest peak. Nearby beaches are lovely, especially Cala d’Hort, with a view out toward one of the island’s most distinctive landmarks, the rocky islet Es Vedrà, and a ten-minute drive/45-minute walk up the coast from another amazing spot, Sa Pedrera (“The Quarry”), a huge rock mined in the 16th century to build Eivissa’s UNESCO World Heritage Old Town. Dubbed Atlantis by hippie visitors in the 1960s, the mined-out rock’s name has stuck, due to its impressive maze of pools, towers, and zigzagging lines, all with glorious views out over the deep blue. It’s truly wonderful for sunbathing, picnicking, meditating, or cliff jumping (well, in summer when the water’s warmer, at least).

The hike to Sa Pedrera – through a mix of open, rocky terrain and dense Mediterranean pines – is less than a kilometre (⅗ of a mile) and maybe 20 to 30 minutes each way, but it can be somewhat challenging (some might even say grueling) especially on the uphill return, due to some amount of steepness as well as sand and unstable rocks. So wear good shoes and sunscreen, and bring lots of water! Start out from the carpark for visitors the the 18th-century watchtower Torre d’es Savinar, where you’ll spot a path curving downward towards the water. 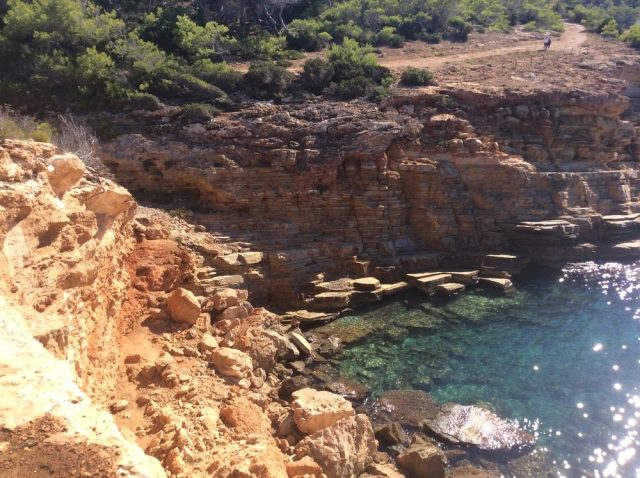 Also out here on the west coast a half hour north of Sant Josep outside party-hearty Sant Antoni de Portmany (which is itself just over an hour from Eivissa), Cala Gració is a sweet little cove beach from which you can hike to another impressive rock formation, Punta Galera, a series of shelflike cliffs along Mediterranean, from which you can jump into the sea or snorkel below. The narrow path north from Gració runs along the coast for a good five km (three mi.), but it’s flat and peaceful, past fancy manses up in the hills, as well as and shrubs where you might spot a rabbit or two – all very straightforward, plus blue arrows painted on the rocks should make things even more obvious. 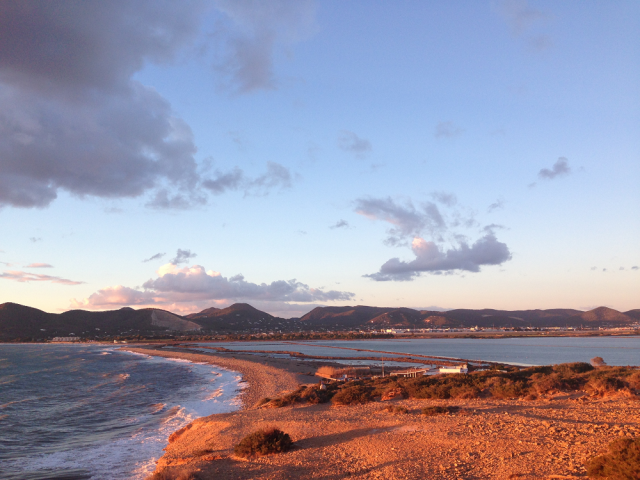 A ten- to fifteen-minute drive south of Eivissa, Ses Salines (The Salt Flats) is known for one of Ibiza’s most fetching and popular beaches. A goodly part of the reason for that is that it’s protected by a UNESCO World Heritage park, 1,786 hectares (nearly seven square miles) full of not just the titular salt flats and marshes, but also dunes, Cap D’es Falcó hill, and various other wetlands, all home to hundreds of bird species (including some lovely pink flamingos!). Sea-salt production was very important on this island for centuries (and to this day it’s prized by foodies), and creating these huge, shallow saltwater pools was how it was harvested – quite a unique sight, actually!

You several trail options here. The longest runs along the park’s entire coast and cuts across inland for total loop of 26 kilometres (16 miles), usually taking around 8 hours (meaning any time except off season this could become pretty grueling).  A much shorter route – just five km/three miles, and one with only a moderate incline – can be accessed near the landmark Sa Canal past the beach. Continue south into the shrubbery and you’ll soon find a trail (watch for the blue arrows!), which will circle you around the coastline and across Cap D’es Falcó, ending up at the restaurant Experimental Beach. You’ll catch stunning views of the park and across the sea to the island of Formentera from these heights, and just before sunset, the entire landscape glows in a pink haze as the falcons for which the hill is named race through the sky. One caveat: avoid visiting just after a heavy rainstorm, when – not surprisingly – it can get slippery and muddy out here.