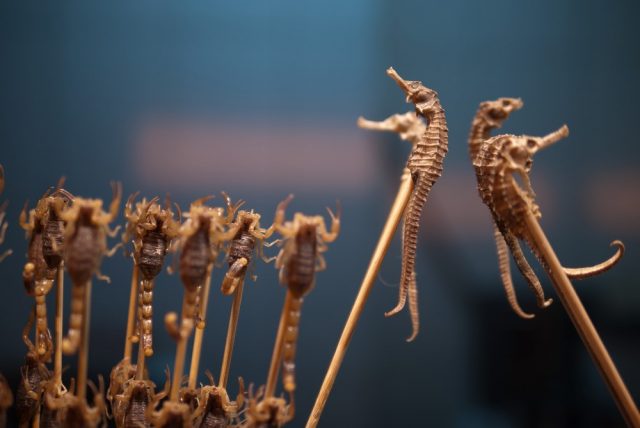 When I travel, when at all possible I like to try unusual foods – sometimes very unusual – crickets, larvae, camel, puffin, kangaroo…you get the idea. So when I recently got back to Beijing, one spot on my bucket list was one particular “snack street” – one of the various pedestrian lanes lined with street-food vendors. This particular one, a several-block stretch off a downtown thoroughfare called Wangfujing, one of the Chinese capital’s most famous shopping streets, was notorious for mixing the mundane with the bizarre. So of course off I went!

On this weekday evening, the stalls were brightly lit and the street was teeming with strollers, loud and lighthearted in that way that many Chinese have in public. On offer: lots of stuff on sticks, perfect for walking and noshing – especially kebabs, shrimp, and candied fruit, along with fresh-made yogurt, fried dough, and steamed buns. But what many many of us “hairy barbarians” come to gawp at and occasionally sample is the handful of stalls hawking snacks of unusual critters that are rarely eaten outside Asia – and truth be told, rarely even by most Chinese people these days. 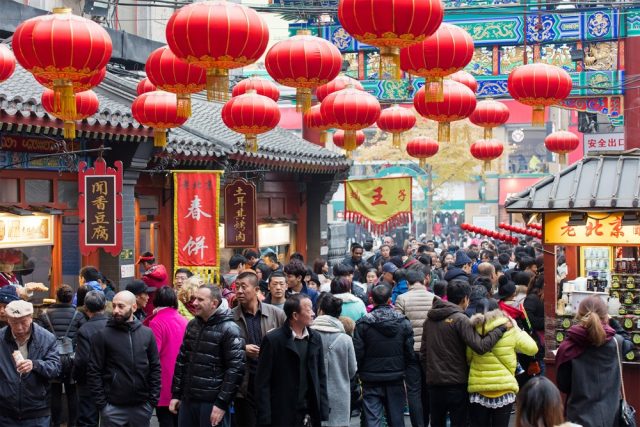 In this enormous country, in centuries past, finding food could be a major challenge for many, especially for peasants out in the countryside. And so perhaps understandably, what was fair game for the dinner table was pretty broad (something similar held true once upon a time in Europe, where peasants would let nothing go to waste, and regularly consumed organs and meats that are much less common today, stuff like brains, lungs, kidneys, bone marrow, intestines, and horsemeat).

And even today, there’s still a small – perhaps nostalgia-driven? – niche market for the creepy-crawlies that used to be more common in rural diets. So we’re talking about the likes of (in alphabetical order, because why not): bats, centipedes, scorpions, starfish, seahorses, snakes, and tarantulas. And sometimes they’re even alive and wriggling, waiting to be flash fried. 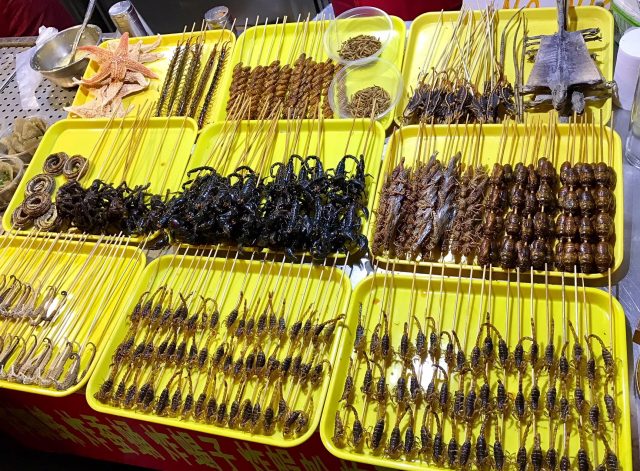 Now, such stands attract some numbers of gawpers (enough that “no photos” signs are often posted; you have to buy the goods or pay to take pictures of them), but very few actual takers – which is probably among the reasons why they’re among the more expensive noshes on the street. Two of my companions were young Chinese ladies who’d latched on to me, trying to get me to marry them, and they were quite frankly perplexed by my interest in such gross things.

In fact, I was the only taker I noticed all evening – a silly, hairy barbarian on the hunt for a food adventure. My own creepy-crawlies of choice were scorpion (top) and tarantula (below). And like the time I went bungee jumping in Australia, I figured it was best if I didn’t overthink and agonise ahead of time. So…chomp, chomp.  And the verdict? 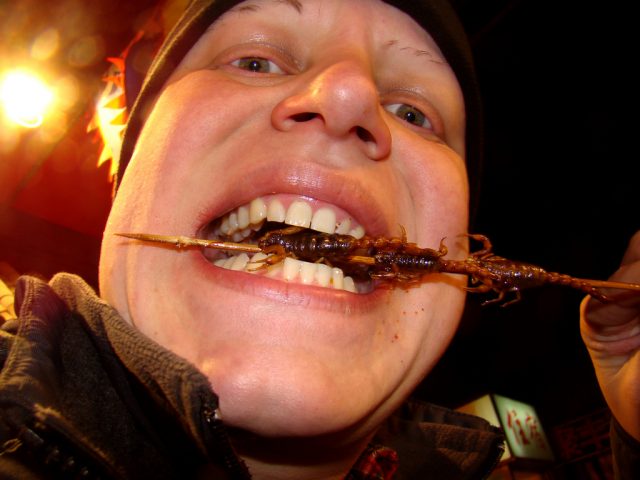 The scorpion was of course crunchy, and the taste was delicate – a bit hard to describe, but perhaps faintly fishy or perhaps lobsterish, with a slightly bitter undertone. As for the tarantula, it wasn’t too far off the mark from that description, either – slightly fishy (one blogger described it as “a cross between chicken and cod”, and I guess that’s a description I can ratify. Not a lot of meat in either, and in any case, after a couple of bites apiece, I was out. Mission accomplished!

I’ve been reading that even in the West, eating insects is becoming a minor trend in eating healthy (more protein than regular meat!), and one that appears to be picking up steam as time goes on. So who knows, perhaps one day we’ll all be nibbling on scorpions, spiders, and more. And the Chinese and many of their fellow Asians were there first!