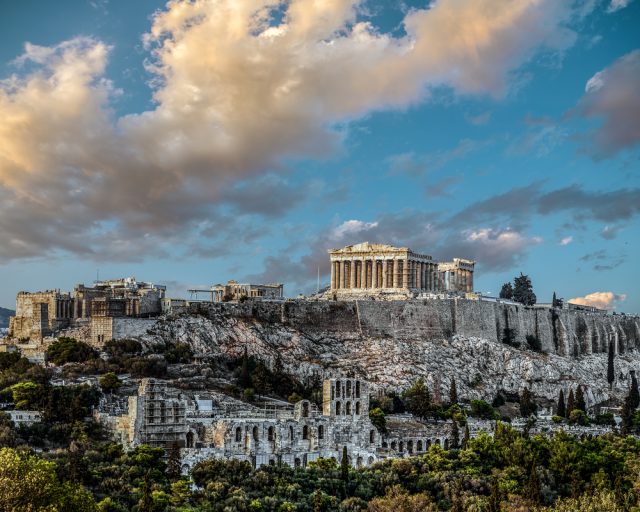 There are myriad reasons to visit Greece‘s capital, of course. But when it truly comes down to it, what never fails to fascinate us is Athens‘ legacy as the cradle of Western civilisation, with a recorded history stretching back a mind-boggling 3,400 years. And at its epicentre is of course the rocky outcropping in the city’s centre known as the Acropolis, itself centred around the Parthenon, the most important remaining building of classical Greece.

Once we climb the steps up to this legendary hill, we find ourselves before the Propylaea,  the doughty, Doric-column-flanked portal to the Parthenon looming above, work of the great Athenian artist and architect Phidias under commission of the great statesman Pericles himself. Beyond, there’s not much left inside the Parthenon itself today – many of the sculptures were spirited off to the British Museum to become the Elgin Marbles, while other pieces can be seen in the Acropolis Museum (see below). But on the other hand, much of the longtime scaffolding and heavy machinery are finally gone as the more than three-decade restoration project approaches its end, to correct the ravages of time, including war and more recently the stresses of climate change. Visitors can now see more of the structure as it originally was, with its soaring columns and lintels, and sweeping views out over the city and hills such as Mount Lycabettus, the city’s highest. 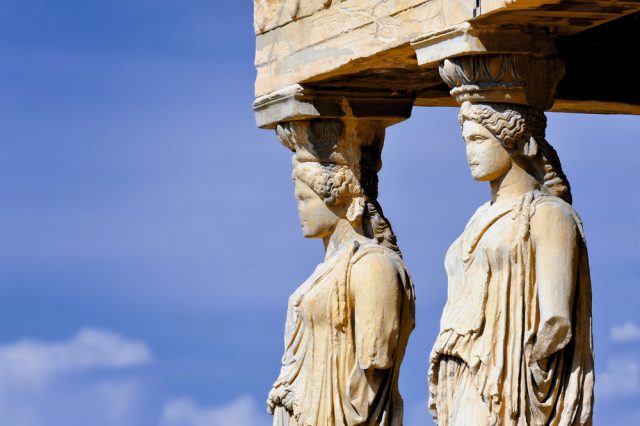 Other ancient temples up here on the Acropolis include the Erechtheion, dedicated to Athena and to the god of the sea, Poseidon, and whose most striking feature is the Porch of the Caryatids (above), with columns in the form of comely maidens. Nearby, dating back to 420 BC, the Temple of Athena Nike features a famous frieze of Nike adjusting her sandal. And at the foot of the Acropolis, the  17,000-seat Theatre of Dionysius (below) is the first theatre ever built, dating back to the fourth century BC.

The newish (completed in 2007) Acropolis Museum is an appealing, engaging multimedia affair with more than 14,000 square metres (more than 150,000 sq. feet) of exhibitions which in addition to providing context for the history of the site and classical Greece in general, also contain many of the statues and other artifacts no longer in the Parthenon and other temples themselves. 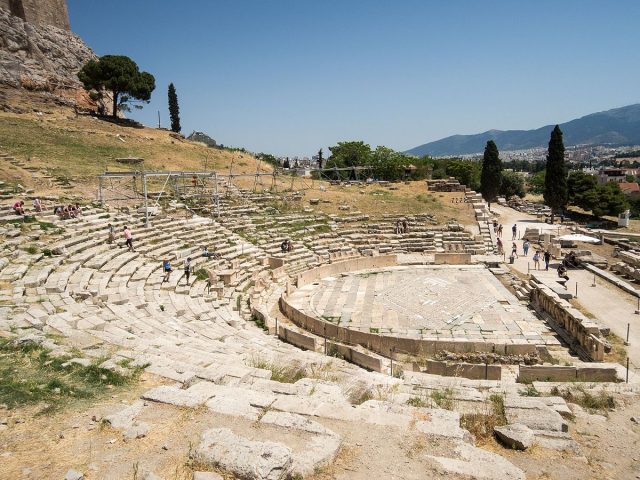 Now it’s time to stroll down from the Acropolis northwest into the Kerameikos neighbourhood (back in the day, the potters’ quarter, from which we get the word “ceramics”!), home to the great Ancient Agora, the centre of the city’s political and social activity, with streets lined with the remains of temples, porticoes, and other monuments and structures. One of them, the 2nd-century-BC Stoa of Attalos, is now home to the Museum of the Ancient Agora, with exhibits mostly connected to Athenian democracy (as well as some artifacts/art from the later Byzantine and Ottoman-occupation era).

Finally, continue past the Temple of Hephaestus, god of toward (remarkably well maintained because it was used into the 19th and 20th centuries as a Greek Orthodox church and then museum) to the ancient cemetery and its Street of the Tombs, crossed by the Iridanos River and ending in the remains of the Dipylon, the main gate of classical Athens’ city wall, built in 347 BC.

There is nothing quite like this stroll through some of Europe’s earliest  recorded history. It’s one of those unique, extraordinary experiences that the word “bucket list” was absolutely invented for.