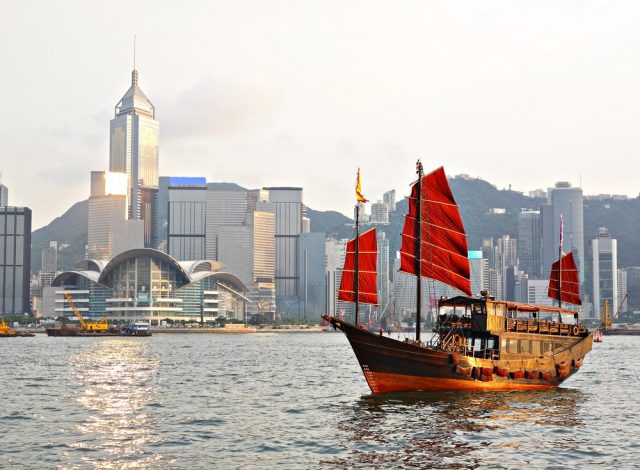 With a subtropical climate, this densely populated territory on the South China Sea – including the Kowloon Peninsula , Hong Kong Island, and more than 200 smaller islands – that was a British Crown Colony for 150 years until it became a “special administrative region” of China in 1999 is a unique place for various reasons. Its history and current special status, obviously – but also because Hong Kong (pop. 7.3 million) is an amazing mix of modern and traditional. The rest of us are struck by the skyscrapers, the busy streets, and the outdoor escalators climbing into the hills. Yet tucked amidst them, as well as in less urbanised outlying areas, traditional Cantonese culture is still vibrant. And now it’s possible to book with Iberia via code share with Cathay Pacific! 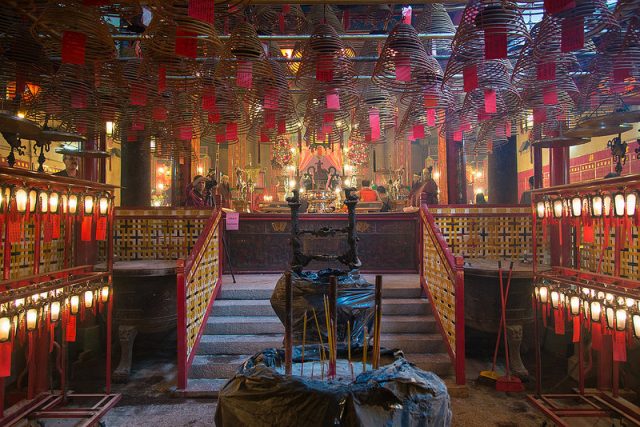 Most visitors start on Hong Kong Island, site of the original British settlement in the 1840s, whose Central District is home to bustling streets and highrises, eateries and markets. But surrounding districts also harbour pockets of tradition, such as Sheung Wan, home to Man Mo Temple (above) on Hollywood Road. HK’s oldest Buddhist temple, it dates back to the 1840s, and stepping into its dim, incense-perfumed interior feels like gaining exotic refuge from the modern hullaballoo just outside (Hollywood Road is also home to myriad, high-quality antiques vendors). There are some other pretty funky markets hereabouts, too, such as the Dried Seafood Street stretch of Des Voeux Road, and Tonic Foods Market (bird’s nest and ginseng, anyone) on Wing Lok and Ko Shing Streets. And among my favourite mementos – a soapstone “chop” which when pressed on an ink pad will print your name in Chinese characters – can be made in short order on Man Wa Lane (the chop maker will give you a Chinese name based on the sound of your own, or on your interests).

Another cool Central experience is to ride the escalators up to the area called the Mid-Levels, including the world’s longest outdoor escalator (800 metres/2,625 feet) – and while you’re up here, why not have a look at the Sun Yat-sen Museum on Castle Road, about the life and times of the first president of post-Imperial China. Speaking of museums, there are a number of interesting ones in Central, the most compelling perhaps being the Flagstaff House Museum of Tea Ware, the Police Museum (for its exhibition about Hong Kong’s notorious Triad Societies), Medical Science Museum (including a fascinating examination of traditional Chinese medicine), and the territory’s oldest (1953), the University Museum and Art Gallery (antiquities to contemporary).

But truly, one of Central’s high points – quite literally – is Victoria Peak , 554 m (1,818 ft) up and therefore offering sweeping views out over the whole business from Peak Tower, along with a clutch of souvenir shops and pricey restaurants as well as a couple of kitschy museums. You get up here via the Peak Tram, which runs along a steep 1.7-kilometre (one-mile) track. 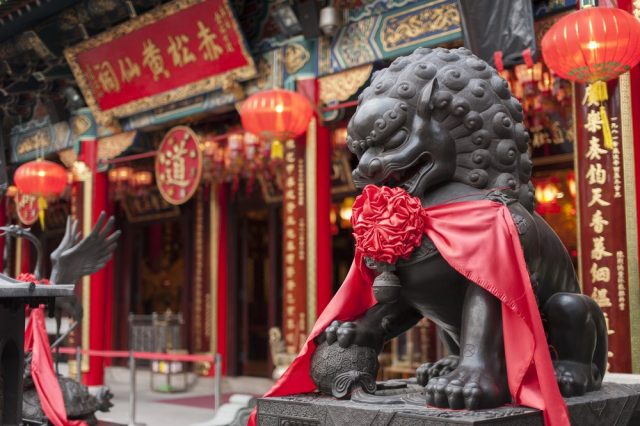 Taking a ferry or public transport (see below) north across Victoria Harbour, Kowloon is 47 square km (18 sq. mi.), largely high-density residential with attendant businesses. The feel over here is more local and a bit less Westernised, but besides getting a good look at how average Hongkongers live, there are also a number of other rewarding “sights” for visitors, particularly in the Tsim Sha Tsui and Mong Kok districts. These includes Taoist temples like the Tin Hau complex (mid to late 19th century) and especially the colourful Wong Tai Sin (1921). For a truly ancient site, head to the Sham Shui Po quarter, where the Lei Cheng Uk Han Tomb Museum preserves a military officer’s tomb dating back to the Eastern Han Dynasty (25-220 AD), with an interpretive museum and a traditional Han garden right alongside.

My favourite Kowloon street markets include Jade Street in Yau Ma Tei, selling exquisite jade objects from tiny trinkets to imposing sculptures. And of course the much larger Temple Street Night Market, liveliest from 7 pm till midnight, is an entertaining local experience, its merchandise mostly utilitarian but also including tea ware and antiques – plus a plethora of fortune tellers, food stalls, street artists, and even live performances (this might be a good place to catch a taste of Cantonese opera – similar in flavour to Peking opera – instead of sitting through a full production of three or four hours at venues like Kowloon’s Ko Shan Theatre). 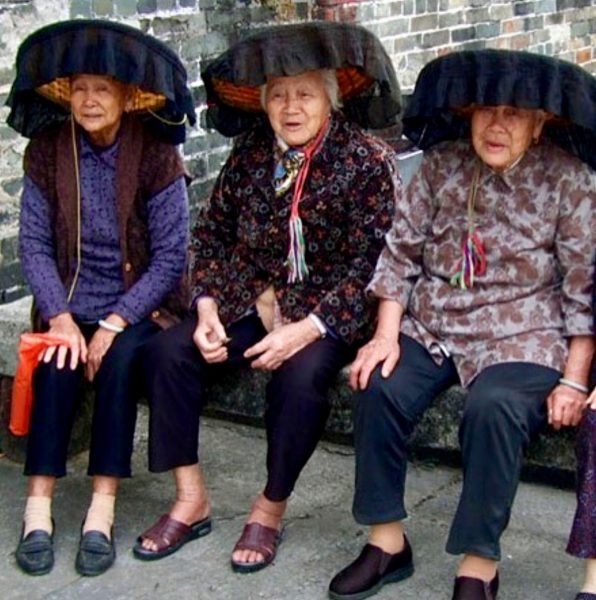 Next, if you have a bit more time to spare, north of Kowloon lies the swath that makes up 86 percent of Hong Kong, a 952-sq.-km (368-sq.-mi.) mix of large housing estates; neighbourhoods of modern houses; quaint traditional villages; and open countryside, hills, and forests, great for hiking, biking, and other outdoorsy pursuits. Those aforementioned villages notably include Sai Kung, a port town known for its harbourfront seafood restaurants, floating seafood market, and lovely coastal scenery and nearby beaches like Sai Wan. But for me, by far one of the most fascinating parts of the NT is its walled villages dating as far back as the 13th century, which you can explore on the Ping Shan Heritage Trail. I recall visiting one, Tsang Tai Uk, founded in the 1840s and a stronghold of the Hakka people (whose language and culture aren’t Cantonese or Mandarin), and amid its narrow lanes spotting old ladies still wearing their big, umbrella-like hats (above). 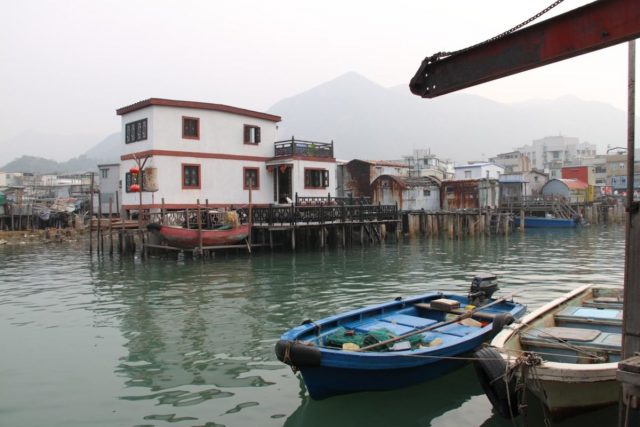 HK’s largest island, Lantau, offers, in addition to the international airport and Hong Kong Disneyland, some nice beaches; typical towns such as Mui Wo (where you can visit one of the historic silver mines for which it was once known) and Tai O (above, the “Venice of Hong Kong”, with its houses on stilts); Ngong Ping’s Po Lin Monastery with its giant Tian Tan Buddha statue; and Ngong Ping Village, with shops and eateries housed in reconstructed traditional Chinese architecture.

Then finally there are a score of small “outlying islands” such as Cheung Chau, once a pirate hideout but now attracts seafood aficionados, windsurfers and sunbathing day trippers, and larger Lamma, known for its great beaches, seafood, and artsy vibe fueled by creatives taking refuge from more urbanised Hong Kong’s hustle-bustle and high prices.

It’s fairly easy and inexpensive to get around to see and do quite a bit of the above this via the MTR (the local Underground or metro, which also runs out to Lantau and the New Territories), light rail, double-decker trams, and buses of varying size – in addition of course to taxis. But the most scenic public transportation by far is the ferries, the most reknowned of which is the Star Ferry (the most dramatic views – especially at night – are from Kowloon to Central). In addition to its regular commuter crossings (just ten minutes long), Star also operates an hourlong harbour cruise stopping at key points along the way.

Hong Kong is a flight of just under three hours (or eight hours via high-speed rail due to be inaugurated this summer) from Iberia gateway Shanghai. More info: DiscoverHongKong.com.