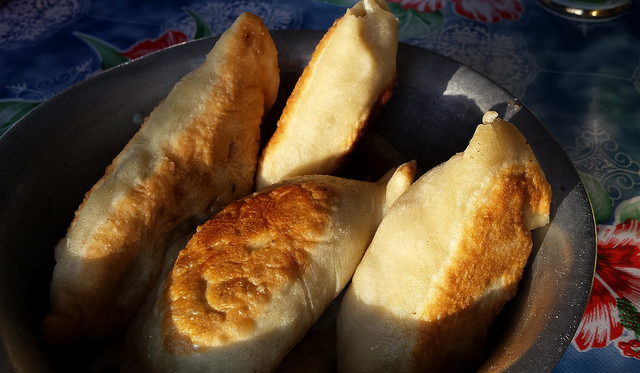 Panama is in general not distinguished by cuisine with any particular local personality – it’s overall pretty similar to that found all over Central America. But one exception is the tasty meat pie known as the carimañola (shared, as it happens, with Panama’s pre-canal mother country Colombia).

Not unlike their better known cousins empanadas, carimañolas are minced meat, seafood, and/or cheese encased in a shell of fried dough – though in this made not of wheat flour but of a tuber called the cassava (aka yuca), an integral dietary staple in Central America as well as the Caribbean and northern South America.

Widely popular both as breakfast items and snacks; you’ll find carimañolas offered everywhere from humble street vendors to canapés at fancy events. And increasingly they’re also making appearances on elegant nouvelle-Panamanian menus, especially in capital Panama City.  One of the country’s top chefs, Mario Castrellón of the highly acclaimed restaurant Maito serves a version stuffed with octopus and coconut. Castrellón says that carimañola fillings should always have fairly bold flavours and always include the herb cilantro. And ideally washed down with a nice, ice-cold beer.

Sounds good to me! Another tasty reason to visit this cool little country.