Did you know that you can ski in 274 countries – even including Hawaii and South Africa? The skiing countries of the world certainly do vary a lot, but if you’re yearning for world-class winter sports outside cute, classic little chocolate-box villages with friendly family-run hotels and chalet-style architecture like the gingerbread house out of Hansel and Gretel – and perhaps cosy, gemütlich mountain eateries serving heart-warming comfort food – the Austrian Alps are your destination.

You’ll also find that some of the most extensive glacier skiing is in Austria, with the six highly developed resorts and ski areas of Sölden, Stubai, Kitzsteinhorn, Pitztal, Hochgurgl, and Hintertux, where you can ski for all or at least most months of the year.

The downside? Many Austrian resorts are fairly low in altitude. Therefore, to be sure of decent snow in the majority of destinations it’s safest to go in the middle of the season (which generally runs from late November through mid to late April).

And now, without further ado, here’s a stupendous septet of my favourites:


This little beauty near Innsbruck is on my list not so much because of its steepness or variety, but because it’s the quintessential Austrian village oozing Alpine charm. The first tourists arrived in Alpbach in the early 1900s, and by 1938 the resort had accommodation for 110 visitors.

The key to its modern-day success is that during the European ski boom that began in the 1960s, the powers that be decided to avoid the hypercommercialised development pursued by some of its Tirolean rivals in favour of aiming to conserve the vibe of an unspoilt farming village. So even in 2018, life in tiny Alpbach (pop. 2,580) revolves around the beautiful old church and equally beautiful old village inns, as it has done for more than a millennium.

The whole place is family-friendly and, because in recent years it linked up with Auffach in the Wildschönau area to form Ski Juwel, with 109 kilometres (68 miles) of groomed slopes offering 45 lifts and mainly beginner to intermediate skiing. 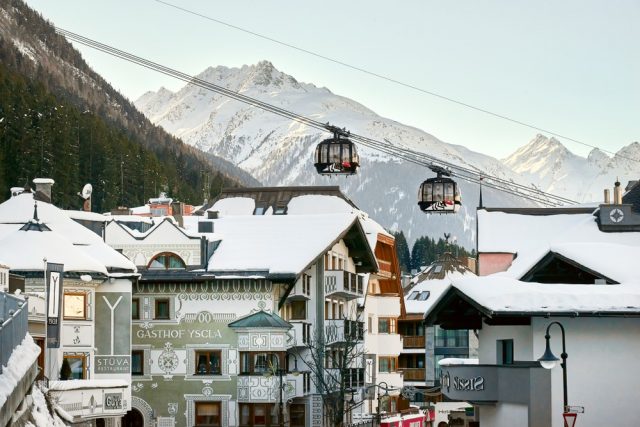 Considered to be Austria’s second most important resort after St Anton am Arlberg (below), Ischgl’s 238 kilometres (149 miles) of groomed terrain have a reliable snow record and is linked by lifts to Samnaun in Switzerland (the red run from top of Palinkopf to Samnaun is a favourite, as it’s fun skiing two countries on one run, and this piste down to Samnaun is a lovely long and scenic run with a vertical drop of 1000 metres/feet).

But Ischgl is best known for its extremely lively après-ski and the Top of The Mountain concerts that herald the beginning and end of the long ski season. The shows have been running here for over 20 years, with stars such as Elton John, Bob Dylan, Robbie Williams, Mariah Carey, the Killers, Deep Purple, and Kylie Minogue gracing the outdoor stage no matter what the weather. A fun time for winter sport enthusiasts and their less sporty companions alike!

This mediaeval silver-mining town (pop. 8,200) is set against the dramatic backdrop of the Wilderkaiser mountains, and is unquestionably the prettiest ski town in the Alps – and in my opinion among the top ten resorts in the world for pure “wow” factor. Inside Kitzbühel’s buttressed town walls is an old quarter (above) with cobblestone streets and gorgeous frescoed buildings. It’s a real pleasure just to wander around the pedestrian centre gazing at the architecture before popping into a lovely boutique, or enjoying an apple strudel at one of its coffee houses. The romantic ambiance makes this just as good a destination for non-skiers as it is for skiers.

But the other side to Kitzbühel is its downhill racing. For this is home to the Hahnenkamm, the toughest event on the World Cup circuit, held each January on the Streif race course. When not prepared for racing, the Streif goes back to being a family trail – in fact most of the skiing and snowboarding on its 179 kilometres (111 miles) of trails area is suited to intermediates and there is a modern system of 54 lifts. The only minus point here is the low altitude. With the village set at a modest 760 metres (2,493 feet) above sea level, the best skiing is to be found from late January to to early March. 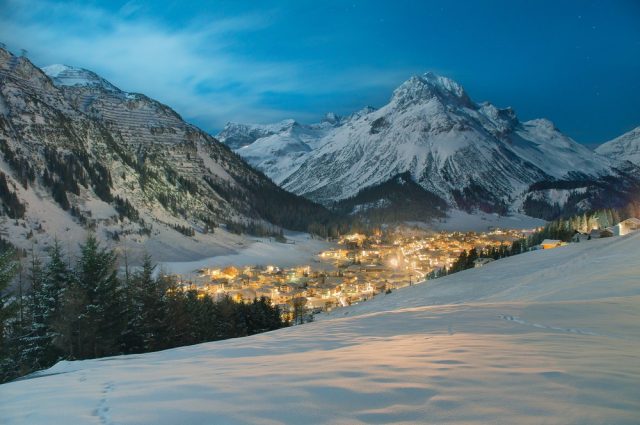 A highly traditional and exclusive resort, until recent years, once the slopes were deemed to be “full”, this traditional village of barely 1,900 year-round residents would only allow skiiers and snowboarders staying locally to use them. Though this is no longer done, it’s a kind of exclusivity that’s still reflected in the character of this village and neighbouring Zürs, with some of the smartest hotels in Austria, with six five-star hotels between them, some of which are regular haunts of Euro royalty.

Two years ago, Lech linked on piste with St Anton am Arlberg (below), turning the area into the biggest and most impressive in Austria, with 305 km (190 mi.) of trails. This added St Anton’s much needed steep skiing to Lech’s otherwise slightly bland intermediate pistes. 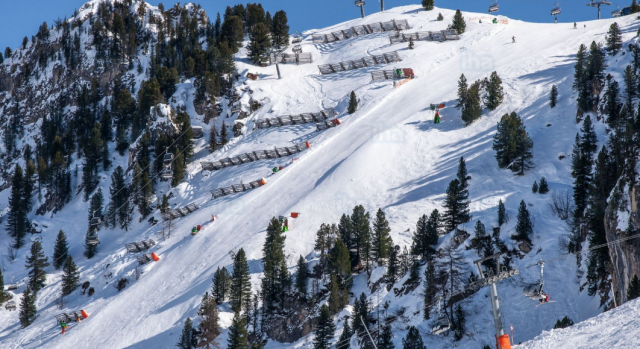 This one claims to suit everyone – with varied skiing, excellent ski schools and childcare, and buzzing après-ski. But it also has one of the most notorious pistes in Austria. Harakiri is a black run that drops down the back of the craggy Knorren mountain, immediately above the town. Indeed named after the notorious Japanese form of ritual suicide, Harakiri’s maximum pitch is 78 degrees – which is a test of nerves for most skiers and snowboarders.

Although Mayrhofen is the biggest, it is just one of the resorts of the Zillertal valley – which consists of a handful of villages and offers a total of 515 km (320 mi.) of pistes as well as 179 lifts. You might think this would make the Zillertal one of the world’s top ski regions, but the terrain is split into lots of different sectors and is accessed from completely separate villages – and the skiing is not linked. You can reach all the areas on the narrow-gauge valley railway, and you can choose between lift passes that cover one or all of them.

One of the resorts, which is under half an hour away, is Hintertux, which has a glacier with a top lift going up to 3,250 metres (10,663 feet). It offers the steepest terrain of all the Austrian glaciers, and it is the only European glacier that’s open for skiing every single day of the year. It’s an ideal destination if the snow isn’t up to scratch in Mayrhofen, or you want a day of doing something completely different. 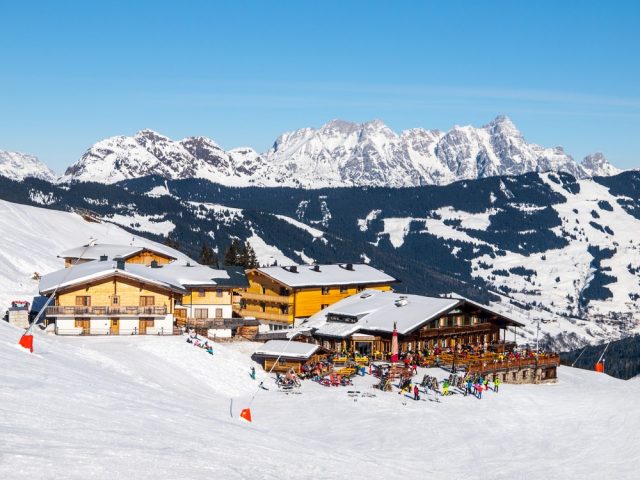 
This resort includes not just the village of Saalbach proper (the largest locally, with the most hotels and businesses), but also nearby Hinterglemm in the next valley over (also with good après-ski, as well as being a bit more family friendly), and Fieberbrunn (large, sprawling, and also family-oriented) over the state border in Tirol. It was just a couple of years ago that these three were linked by high-tech gondola to create a total 270 km (168 mi.) of pistes and 68 lifts.

These resorts now all share an extensive ski circuit with wide and mainly intermediate pistes, reliable snow cover, and an ultra-modern lift system. As well as being great for intermediates, the off-piste – particularly around Fieberbrunn – is excellent. This is one of the venues for the Swatch Freeride World Tour in March. Saalbach is also a good destination for people who just want to ski to lunch, with some excellent mountain eateries to be found throughout the whole area.


With 305 km (190 mi.) of piste and 88 lifts, St. Anton can without a doubt lay claim to the best steep and deep skiing in all of Austria. In terms of terrain it’s the country’s most suitable resort for experts and one of the top in the world for off-piste skiing. There’s plenty of intermediate skiing, but a blue run here might well be graded red elsewhere. It’s not a destination for timid skiers and boarders, but this should not deter visitors of all ages from visiting a resort with a long and interesting history that parties as hard as it tears down the slopes.
Dorf is the most central part of town to stay in – the après-ski is on your doorstep, and it’s just a short stroll to the Galzigbahn, a jumbo, glass domed gondola up the mountain which looks more like an avant garde art gallery than a lift station.

Gateways: Zurich (2¼ hrs) or Innsbruck (just over an hour).