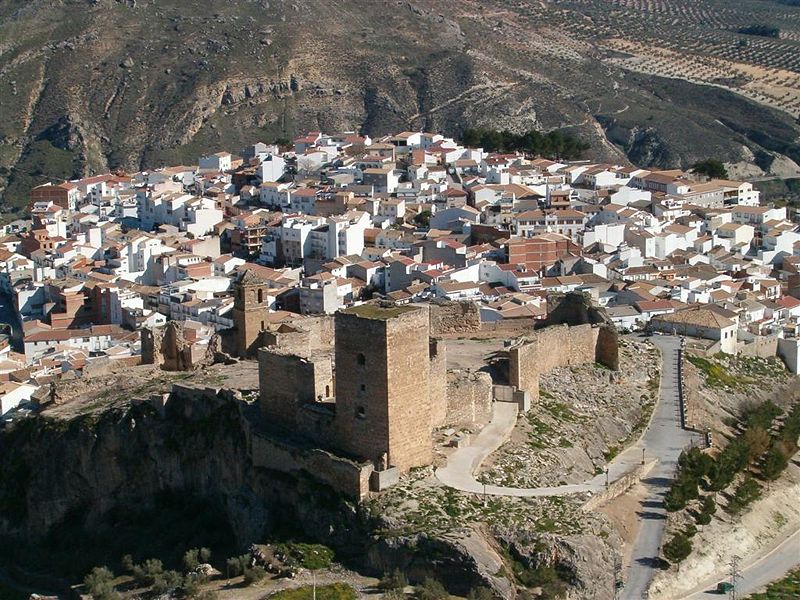 Completely encircled by a mediaeval stone wall and with just over 1,500 inhabitants, tiny Laguardia (top, aka Guardia) is one of the loveliest old towns in a country packed with lovely old towns. On a hilltop in Spain‘s verdant Basque Country (Euskadi in Basque), it was built in the mid-12th century as a defensive outpost for the Kingdom of Navarre, and to this day still evokes that bygone era with its warren of narrow, often semi-dark streets; more than 300 defense tunnels; and five doughty gates controlling access to and from the town. In these thankfully more tranquil times, Laguardia is one of the most popular draws among visitors to the Basque province of Araba (Álava in Spanish).

Its evocative landmarks include churches such as Santa María de los Reyes, with its Gothic portal, and San Juan Bautista, known for its elaborate altarpieces; the late-12th-century Romanesque Torre Abacial (Abbey Tower); grand townhouses; and narrow Plaza Mayor, ringed by porticoes and starring a carillon clock featuring animated figures dancing a traditional dance. It’s also well worth mentioning nearby ruins predating the Roman Empire, such as a stone pond and ceremonial centre built by the Celtiberians and the Bronze/Iron-Age settlement La Hoya (Biasteri in Basque), dating back to the 15th century BC.

Laguardia’s other allure is as the capital of the Rioja Alavesa, the smallest sector of Spain’s famed Rioja wine region, with bars all over town offering various vintages of the local tempranillo-based wines, along with the wine cellars which now occupy a number of those 300 ancient defense tunnels, as well as the vineyards below (the best known being Bodegas Ysios, above, housed since 2001 in a spectacular “surface wave” designed by Valencia-based starchitect Santiago Calatrava).

This town is just one of the many fascinating spots you’ll find in Araba, the least well known among non-Spaniards of Euskadi’s three provinces (the others being Gipuzkoa, its capital San Sebastián, and Biskaia, its capital Bilbao). For example, you’ll also definitely want to pay a visit to its capital, Vitoria-Gasteiz, also founded in the 12th century by Navarre’s king Sancho VI.

Also the capital of the entire Basque Autonomous Community and its largest city (pop. 242,000), Vitoria-Gasteiz nonetheless feels like a small town in many ways. For visitors, its main allures reside in the Gothic Old Quarter, which has been steadily renovated over the course of more than a decade. Top landmarks include the 14th-century Santa María de Vitoria Cathedral (above), its façade packed with masterful sculptures and portals – it was actually the inspiration for British author Ken Follett‘s magisterial 1989 novel The Pillars of the Earth (in 2008, the city even put up a statue to Follett alongside the cathedral). The nearby Plaza de la Virgen Blanca (Square of the White Madonna) is one of the Old Quarter’s hubs, where in the first week of August locals celebrate the city’s eponymous patron saint with six days of 133-year-old festivities, a highlight of which is the “descent of the Celedón“, a rag doll with an umbrella zooming over the square on a wire! Good times…

Strolling the streets of Vitoria-Gasteiz is truly a treat not just for their mediaeval vibe but also some remarkable, more recent additions. A top example is the triangular, pink-granite Plaza de los Fueros, built in 1979 by architect Luis Peña Ganchegui in collaboration with Eduardo Chillida, one of the maestros of Spanish art. For something even a little edgier, check out the Ciudad Pintada (Painted City) walking tour of 15 colourful works of street art emblazoned on local buildings.

And speaking of art, the city has a pair of very good museums devoted to it: the Artium, focussed on Basque and Spanish modern art (famous names include Chillida, Picasso, Miró, and Tápies), and the Museo de Bellas Artes, displaying fine Basque and Spanish art of centuries past in an elegant mansion. Other top museums include the Bibat (archaeology), the Museo de Ciencias Naturales, covering biology, geology, and zoology; and the local museum scene’s ace in the hole, the Fournier, attached to the Bibat and devoted to the history of playing cards.

Big city and small towns; urban and rural; history, architecture, and wine. For the discerning travel, it’s not hard to see why Alaba is awesome.