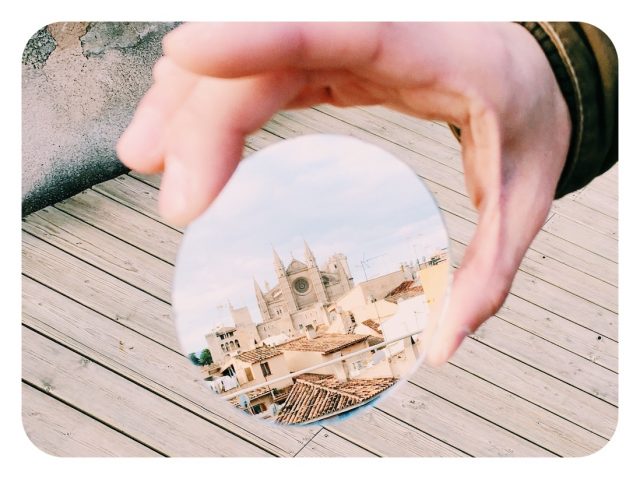 In the summer 1968, the bouncy pop tunes of Helena Bianco were all over Spain’s airwaves, and one of her top hits, “El Puente“, was the song of the summer, whimsically imagining a puente (bridge) to the island of Majorca and rhapsodising “it would be marvelous!” And it’s this song – a nostalgic favourite even of Spaniards who weren’t born when it came out (like yours truly) – that comes to mind when I think about this sun-kissed island and its capital Palma de Mallorca.  Marvelous, indeed!

Though most visitors favour the largest of the Balearic Islands for its delectable beaches, non beach season here offers its own extensive delights, with a cool but comfy average temperature of 11° Celsius (52° Fahnrenheit) and a marvelous menu of history, culture, and cuisine. Its early-13th-century Gothic cathedral La Seu, for example, is one of Spain’s most impressive; its Almudaina Palace, originally built as a fortress by the Moors who once ruled these islands; and the city’s old quarter is an atmospheric mediaeval warren that’s a delight to get lost in.

Another off-season delight in Palma de Mallorca is excellent eating. There’s the simple and traditional – enjoying a sobrassada pork sausage sandwich or sugar-dusted ensaïmada pastry at a seafront café with a sunny Mediterranean view, or sitting down to a meal of Sóller prawns or other fresh-caught seafood, accompanied by a glass or two of the island’s superb wine). And there’s also world-class nouvelle Balearic cuisine that’s even garnered a few Michelin stars – four such restaurants at latest count.

You can also still fantastically feed your foodie soul at the city’s various covered and open-air markets such as Olivar in the Old Quarter, Santa Catalina, and Pere Garau. These aer places not just for buying exquisite Balearic products like sausages, handicrafts, and sea salts, but also rub shoulders with locals sharing tapas, pastries, wine, and frosty glasses of beer.

The Holidays in Palma

Colourful holiday lights bedeck the entire city, of course, and the imposing interior of La Seu is tarted up so prettily, with forests of intricate neules de paper (handmade cut-paper medallions) hanging amid the soaring arches and columns. If you can make it here for Christmas-Eve services, the traditional Cant de la Sibil-la (Song of the Sybil), performed here since the Middle Ages – an emotional experience, indeed.

And on New Year’s Eve the city turns out for the Festa de l’Estendard, a commemoration of the 1229 retaking of the island from the Moors by the forces of King Jaume I, with mediaeval pageantry, music, and solemn ceremonies. Locals count down to midnight in front of the city hall in the charming little Plaça de Cort, downing the traditional 12 grapes as the tower bells mark the stroke of midnight.

If you can’t make it here in December, the first month of the new year is also full of fun and festivities, especially on the feast days of St. Anthony (the 17th) and St. Sebastian (20th), the patron saint of Majorca. They bring days of music and concerts in the streets and bonfires/barbecues in the city squares. It’s a great way to share with locals having a great time.

That’s Palma in winter – fetching, festive, and waiting for you! Come visit with Iberia.