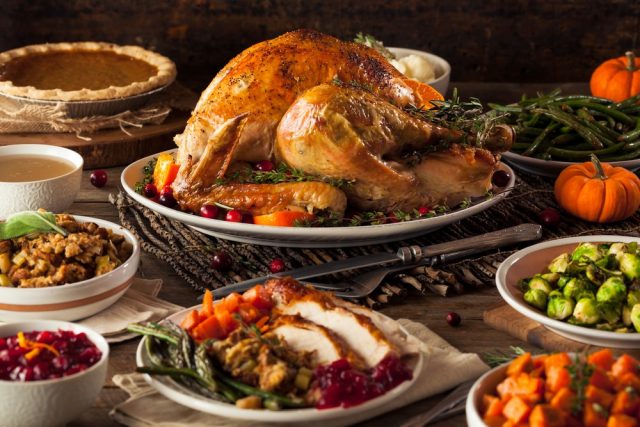 Today is one of the United States‘ few annual holidays which most of its inhabitants regardless of origin, age, or creed cherish and when families reunite unlike any other time of year except Christmas. Always observed the fourth Thursday of November, Thanksgiving is so deep-rooted at least in part because it’s rooted deeply in the beginnings of this country’s history, when in 1621 it’s said the recently arrived Pilgrim settlers from England shared a harvest feast in Plymouth, Massachusetts with the natives already living here, ancestors of today’s Wampanoag Nation (an association which started amicably enough but of course eventually didn’t end too well for the natives).

The traditional meal usually includes a whole turkey “with all the trimmings”, such as bread stuffing and gravy, cranberry sauce, sweet potatoes, and pumpkin pie, although regional variations have since sprung up in other regions with other cultural traditions, such as South Florida, California, and the Southwest. In more recent decades, the holiday has also come to include – especially for the men of the family – a TV marathon of American-football watching, and sometimes even a family game out on the lawn.

In 2018, “Turkey Day” will be observed on November 22, so if you’re thinking of a trip to the USA in the coming year, consider visiting then to be a part of one of this country’s most cherished holidays. And here are five places to experience it at its most typical! 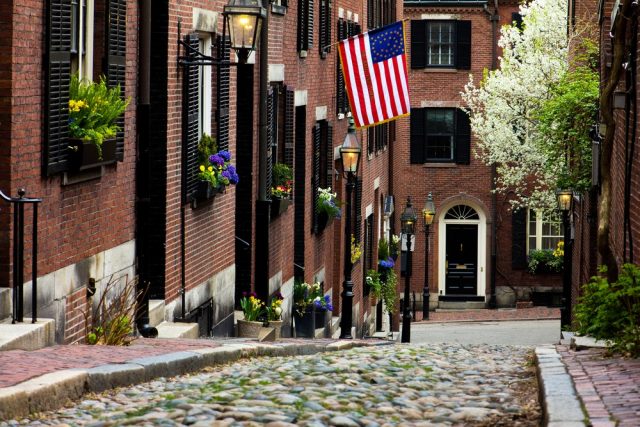 Founded in 1630, just nine years after the first Thanksgiving, “Beantown” is one of this country’s most historic cities – cradle of its 1776 Revolution and a financial, economic, and cultural hub that drove much of the USA’s development for generations. Its core is a charming, atmospheric neighbourhood of cobblestone streets and centuries-old landmarks, and a number of fine local restaurants are open today, as well of course as heritage hotels such as the the Copley Plaza, the Copley Square, the Lenox, the Liberty Hotel, and Parker House.

Various events held today and throughout the weekend include Zoolights at the Stone Zoo just north of the city, the Wild Turkey 5-Mile Run, the Festival of Trees, and the Festival of Wreaths. If you’re a shopper, the day after Thanksgiving is Black Friday, especially interesting along the city’s main shopping mile, Newbury Street. 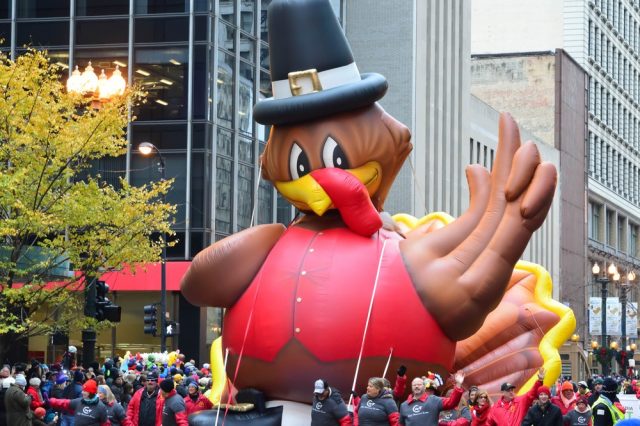 The “Windy City” is another American classic, with downtown’s wonderful 19th-century architecture, its wealth of museums and culture, and its funky “ethnic” neighbourhoods and dining. And Chi-Town also happens to be one of Americans’ top-ten destinations for Thanksgiving travel, with the centrepiece today the big parade (its official title besmirched by a crass junk-food behemoth I will not name) at 8 am on State Street, marching from Congress St. to Randolph St. But other cool activities today include the lighting of the city’s huge Christmas tree and visiting the holiday-season Christkindlmarkt on Daley Plaza. Black Friday shopping? But of course! Turkey Day dinner? Ditto! Consider historic hotels such as Palmer House (Chicago’s oldest), The Drake, and The Alise. The elegant, 110-year-old Walnut Room in the Loop is also a superb choice. 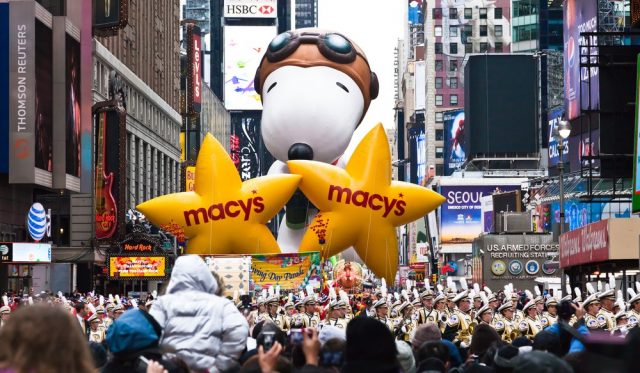 Like Boston dating back to the country’s earliest days, the Big Apple of course offers endless sights and experiences of all types, and a number of its signature attractions, such as the Empire State Building and the Statue of Liberty, are also open today, though few museums. By far the main holiday event here, with its floats, marching bands, Broadway theatre casts, Rockettes dancers, sundry celebrities, and of course titanic character balloons, Manhattan‘s 91-year-old Macy’s Thanksgiving Day Parade is the most famous in the United States, and is even televised. The parade runs from 9 am (but arrive well before for decent viewing!) to noon from 77th Street and Central Park West to 34th Street at Herald Square (it’s also cool to watch the balloons being inflated the afternoon and evening before).

Other seasonal events to enjoy this long weekend include the Radio City Music Hall‘s Christmas Spectacular, the Winter Village at Bryant Park, the Pilgrim Pedal bicycle circuit, and the New York City Ballet production of The Nutcracker. And of course as in Boston and Chicago, Black Friday is a mega-shopping day all over the city. Many are the Turkey-Day dinner options in town, as well, with my historic favourites including 255-year-old Fraunces Tavern (NYC’s oldest remaining building), Delmonico’s steak house (the USA’s first restaurant to serve à la carte dishes), and the 115-year-old Algonquin Hotel. 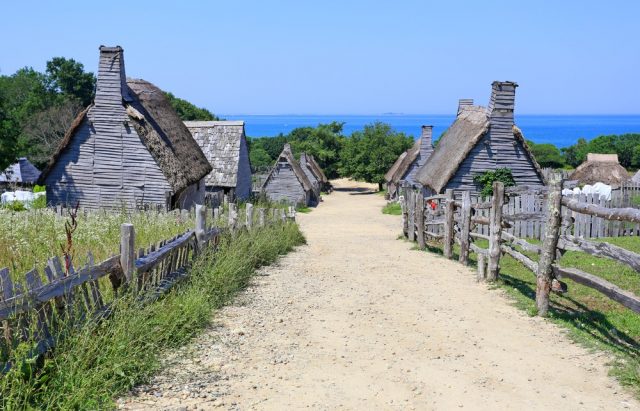 For the most flavour of the original Thanksgiving, none holds a candle to this city an hour south of Boston, site of Plymouth Rock, where the Pilgrims alit from the good ship Mayflower in 1620, as well as the Plimouth Plantation, a living-history museum marking its 70th year, which recreates the original settlement, a Wampanoag village, and the Mayflower itself. It’s here you can enjoy perhaps the quintessential T-Day experience, including a period harvest feast with docents in Pilgrim drag (of course it includes turkey, stuffing, and cranberry sauce, but…stewed pompion, anyone?), the Pilgrim Progress procession, and National Day of (American Indian) Mourning Ceremonies. The town is also the site today of the 4th annual Turkey Trot and Plymouth Pilgrim 5K. 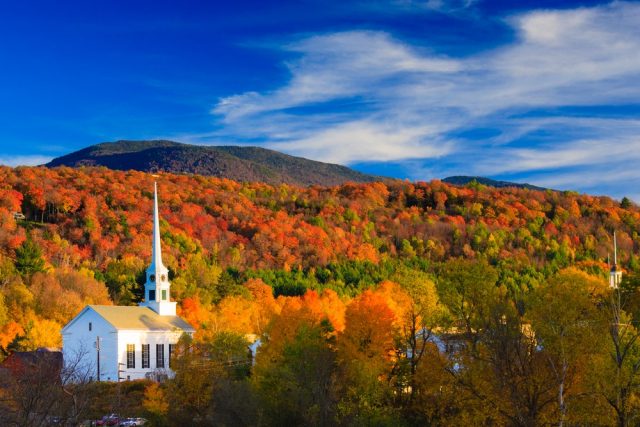 Anywhere Else in New England, Really

Apart from Plymouth and Boston, the region of the USA first settled by Europeans (yes, I know St. Augustine, Florida is older, but still…) provides an immensely picturesque backdrop to this most traditional of American holidays, with its forested hills and quaint towns with clapboard houses and white-steepled churches (one of the best fall foliage destinations around, by the way). You can find inns and restaurants serving the traditional meal all over, but particularly charming towns to consider include Brattleboro, Vermont; Kennebunkport, Maine; Mystic, Connecticut; Newport, Rhode Island; and Portsmouth, New Hampshire. And for more in Massachusetts, I especially like Lenox as well as the various charming old towns of Cape Cod.