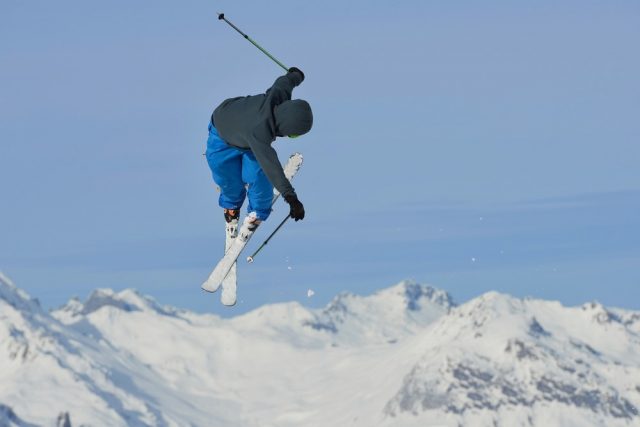 Speaking to my fellow Europeans, if you’ve gone skiing or snowboarding on the Continent but not yet in North America, you’re in for a real treat. Welcome to an unexpected world in which everyone seems to be intent upon you having a good time.

Take ski school for example – in Europe, some still have the attitude “You are here to learn first, have fun second.” Whilst in North America it’s the other way around.

For this is a world where “standing in line” (queuing) has been raised to a virtual art form, with a polite alternate interweaving of lift lines and a special one for singles. No chair ever goes up empty. In fact you might even be scolded if you leave a chair going up with an  unoccupied seat. Regimented? A bit, but everything moves swiftly and efficiently because of it.

There are more rules and regulations here, too, with piste police in evidence on many of the runs, and umpteen signs warning you not to leave the prepared trails. Ducking under the ropes can easily lead to a court appearance and even jail. There are rules for (not) drinking and skiing/snowboarding. Speeding through a designated slow area is strictly taboo, and could cost you your lift ticket.

On the plus side, the level of service on the mountain in Rockies resorts is amazing. Although conditions in the Alps are improving, surly staff are not uncommon.

Unlike Europe, the whole ski area and the resort, most of the hotels, ski schools, childcare and even restaurants are usually operated by a single company. There’s a co-ordinated effort to keep the customer happy.

And though many of these resorts are relatively small compared to Europe, size doesn’t seem to matter when there’s so little queuing and the trails are so perfectly groomed. Then there are the little touches than enhance the holiday experience, such as free tissues and lift maps supplied at nearly all lift stations, and “mountain hosts” who show you around the trails – again, free of charge.

Without further ado, here are my pick of six of the best resorts in the USA Rockies: 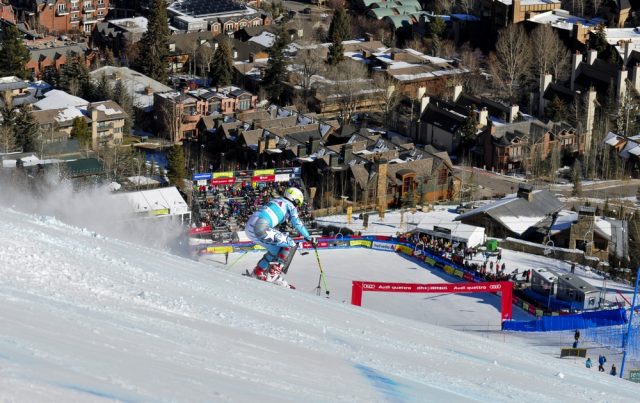 
Everyone will have heard of Aspen – the delightful, very upmarket ski town that attracts celebrities from all over the world. For those with deep pockets, this is one of the best resorts for beginners and intermediates. The slopes are never crowded – even during high season they become only slightly busier than usual.

Aspen isn’t just one mountain, it’s four, although only two have major accommodation bases. The 19th-century silver-mining town itself lies at the foot of Aspen Mountain and is where most of the action takes place, including the après-ski, most of the top restaurants, and the biggest choice of hotels. And though Aspen is known for having some of the highest hotel prices of any resort in North America, lower-cost options do exist.

Snowmass is the ski village set at the bottom of its own mountain, 13 kilometres (eight miles) west of Aspen. Unlike Aspen, it has ski-in ski-out accommodation, and it vies with Aspen to be the place in which to base yourself, especially if you’re here as a family who wants the ultimate skiing convenience.

Highlands has some of the steepest terrain and best off-piste opportunities, whilst Buttermilk is the beginner mountain. 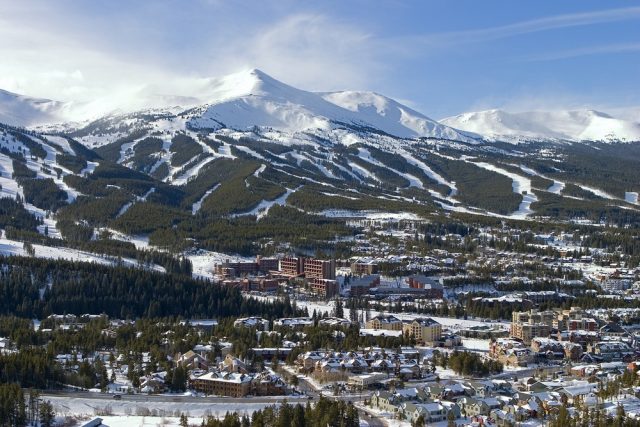 This is another old mining town with good nightlife, but it’s quite a bit cheaper than Aspen or Vail and consequently the most popular resort for visitors to Colorado.

Part of the ever-expanding portfolio of Vail Resorts, it boasts a large ski area suited to all levels of ability, as well as reliable snow conditions; there’s also a huge terrain park here. The slopes go up to 3962 metres (12,998 feet), and its Imperial Express SuperChair the highest lift in the Northern Hemisphere.

The town itself is set at 2,927 m (9,600 ft.), so time is needed to acclimatise at this extremely high altitude. This, combined with low humidity, can cause dehydration and headaches that can be exacerbated by exercise. Main Street is lined with a wide range of shops and restaurants, set in attractive, pastel-painted, weatherboarded buildings. 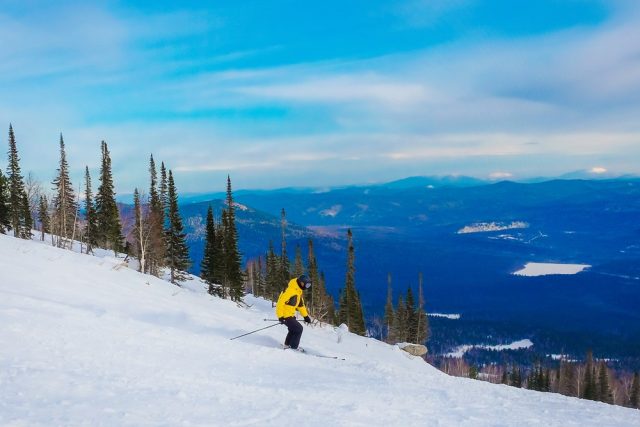 The rather quirky resort on Lake Tahoe straddles the California–Nevada border, with spectacular views from the mainly intemediate slopes of both the lake (the second largest and most beautiful alpine lake in the world behind Titicaca in Peru) and the desert. It is the largest of the 15 resorts that fringe Tahoe’s shores.

Heavenly has reinvented itself since it was bought by Vail Resorts and started to receive lavish annual funding. The development of a village around the base of the gondola created an identity that it previously lacked as the detached ski area of the brash gambling town of South Lake Tahoe. Skiers and snowboardes have the run of 97 trails over more than 19 square kilometres (7½ sq. miles) of varied terrain, ranging from easy cruising runs to steep chutes, all serviced by 28 chair lifts. 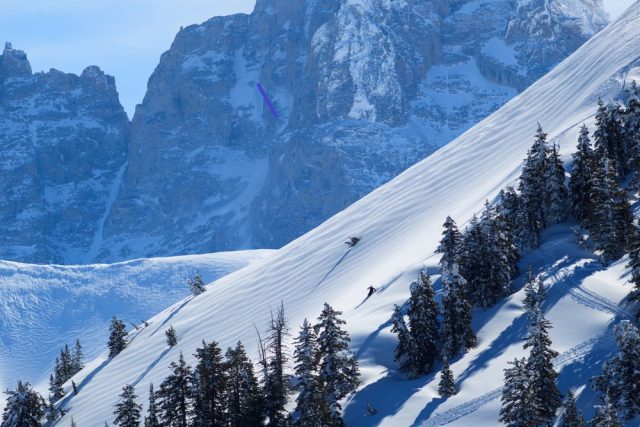 This is my favourite winter resort in North America, and in my opinion it ranks among the top five in the world. The Teton Range has a wild beauty that captivates you from the moment you touch down on the runway – from which you can see herds of elk and even the odd moose.

It’s a 15-minute drive onwards to the quaint yet these days upmarket “cowboy” town of Jackson, but Jackson Hole Mountain Resort is located an additional 20 minutes away at Teton Village, on the far side of the Snake River.

The most important decision is obviously where to stay. Jackson town has some historic hotels as well as budget choices, most of the shops and the widest range of restaurants – but it’s a repetitive drive to and from the skiing. Teton Village, at the foot of the slopes, has a wide range of spa properties and condo hotels. If snow sports take priority over après-ski you’d be better off staying here, with occasional forays into Jackson.

Whatever you decide, remote Jackson Hole is the cult resort for powderhounds, with skiing and snowboarding taking place on steep and exciting slopes. The ultimate test of nerve is Corbet’s Couloir, a leap into space off a cornice, followed by a landing on a 50-degree slope. 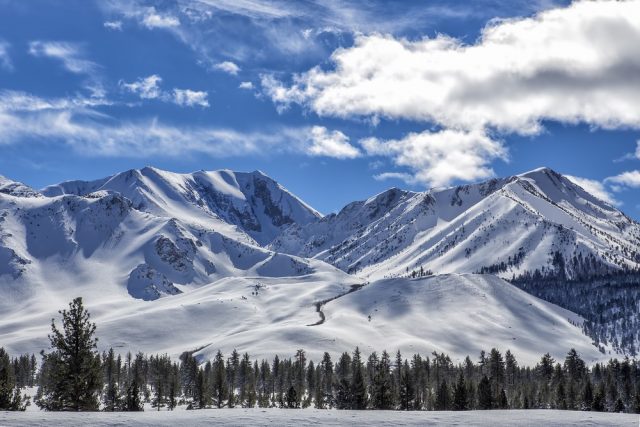 
This large but remote resort is situated in the Sierra Nevada mountains just above the town of Mammoth Lakes, and has skiing/boarding for all levels, with plenty of sunshine and reliable and long-lived snow cover – in 2017, the resort stayed open until August 6! Last season it also had some of the deepest snow in North America – in fact, some of the most snow in the world. The area hasn’t seen the snow at this level since 2004 and some people have had to leave their houses through second-floor balconies.

Overall, Mammoth is a mountain that will please good skiers and snowboarders in search of testing gradients and fresh challenges on beautifully groomed trails across 14 sq. km (5½ sq. mi.) of skiable terrain, including steep chutes, wide open bowls, tree skiing, and bumps. 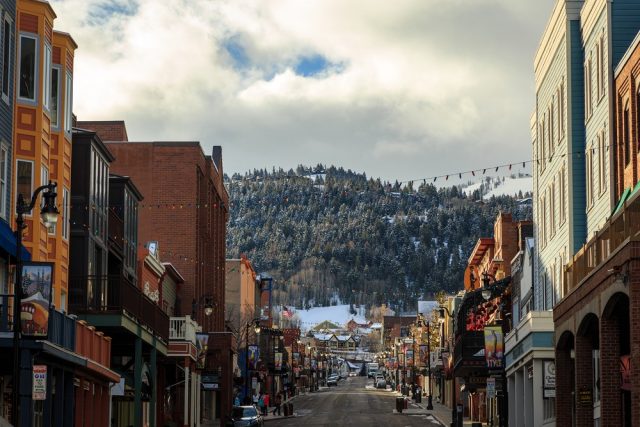 Established in the 1860s as yet another mining town, Park City linked up last winter with the newer resort of The Canyons (opened in 1968) to become the largest ski area in North America, with 265 km (426 mi.) of terrain. That’s even bigger than Whistler in Canada, and the fourth biggest in the world.

Though largely desert, Utah is also famous for its snow – and Park City racks up a healthy average snowfall each winter. There are intermediate-level pistes/trails everywhere, and nowhere better than the sector called King Con.

From Salt Lake City Airport, the transfer to The Canyons takes just 35 minutes; onwards to Park City it’s another 10 or 15 minutes. Few ski areas can match that for convenience. 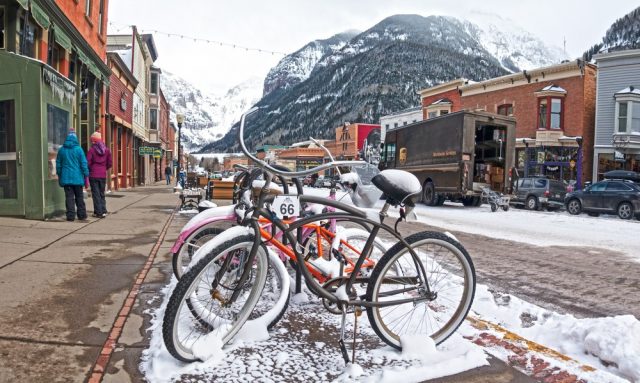 Yet another old mining town – 4½ hours from Vail, just over four from Aspen –   Telluride is tucked away at 2,907 m (9,540 ft.) in a remote corner of the San Juan Mountains, and has a more colourful history and more charm than almost any resort in North America. It was here, for example, that in 1889 that legendary Wild West outlaws Butch Cassidy and the Sundance Kid robbed $24,000 from the San Miguel Valley Bank.

The town today offers a wide choice of shops, hotels, and restaurants. A gondola whisks you up to the separate mountain village with further accommodation, six km (four mi.) away by road.

The skiing suits intermediate to advanced skiers, with See Forever, a rolling blue run starting up at 3,624 m (11,890 ft.) and going all the way down to the village. The whole area is made up of wooded runs with a good pitch for intermediate cruising. The sector immediately above the town is steeper, with some tough options. 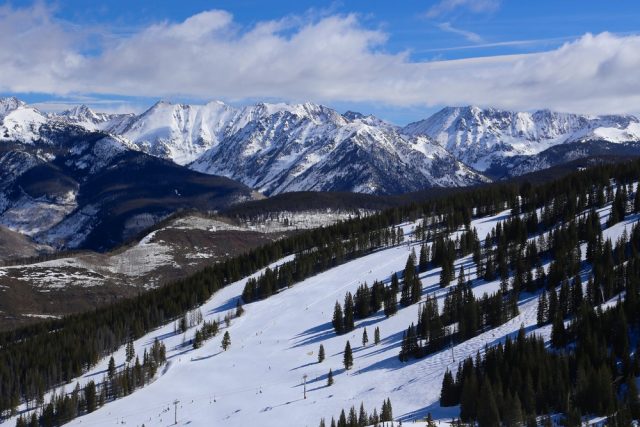 A 2½ -hour drive from Aspen, this is the resort for those who relish the idea of miles and miles of perfectly groomed trails, high-speed lifts, an easy introduction to off-piste skiing, and plenty of family activities. Like most other North American winter resorts, it boasts an excellent ski/snowboarding school.

Accommodation choices lie between the three base areas, Vail Village, Lionshead, and West Vail, linked by heated pedestrian walkways and each with its own shops, restaurants, and bars. The buildings – especially in bustling Vail Village – have been designed to make the whole place look like an Alpine resort. The lift pass also covers neighbouring Beaver Creek, Breckenridge, Keystone, and Arapahoe Basin, adding up to a huge variety of skiing.