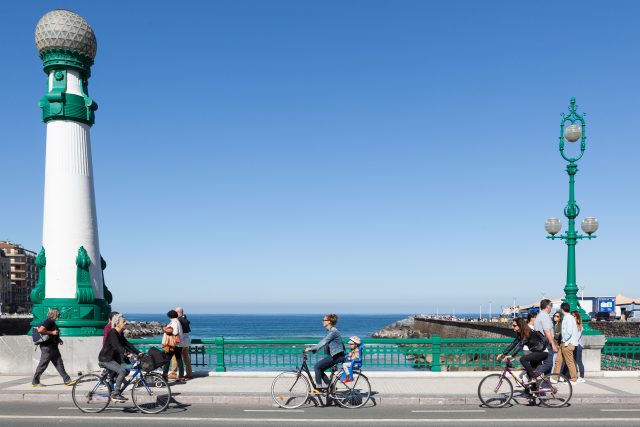 The gracious seaside doyenne of Basque Country cities is a tidy, relatively compact place where all roads lead to its beaches and to the sea, the Bay of Biscay. Besides those fetching beaches, which attract sunseekers from all over Spain and beyond every summer, its burgeoning cultural scene, and the superb local Basque cuisine – both traditional and fine-dining – San Sebastián is also becoming known as one of the country’s bike-friendlier cities, thanks both to that compactness and to its push for eco-sustainability in the past several years.

One particular mark of that bike friendliness is the network of bidegorris (bicycle lanes, below) thoughout the city. Perhaps the best place to start a two-wheeling whirl through San Sebastián would be Plaza Pío XII, just outside the old quarter and several blocks in from the beachfront. Thanks to its central location, it’s one of the best places to pick up one of the bikes from the public bicycle-sharing scheme dBizi, with 16 stations throughout town, where you can rent a bike for 8 euros per day (15€ for three days/20€ for five days).

Then, pedalling off under the giant chestnut trees of Paseo Vizcaya, we arrive at the María Cristina Bridge, which takes us to the main train station, Estación del Norte, and the Tabakalera, an imposing early-20th-century tobacco factory which in 2015 reopened as a multidisciplinary, multicultural centre with a slew of cool exhibitions and events. 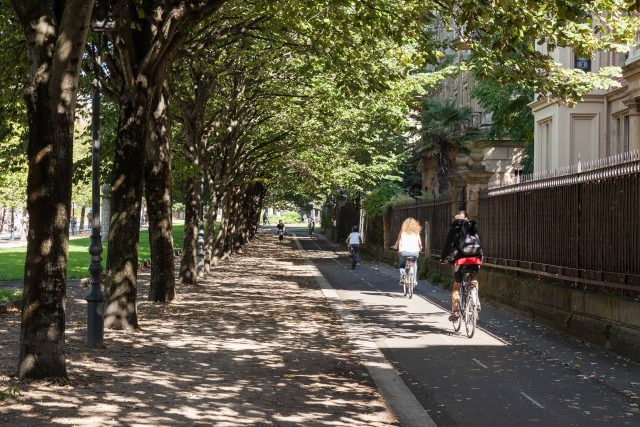 From here, it’s down the leafy Paseo de Francia to the Santa Catalina Bridge, passing seven palatial villas, also dating back to the early 20th century. This stone bridge – San Sebastián’s first, its current incarnation dating back to 1926 – is the gateway into the increasingly cosmopolitan Gros neighbourhood. But our route this time takes us parallel to the city’s river, the Urumea, past the iconic Hotel María Cristina and Victoria Eugenia Theatre, both major sites of September’s prestigious San Sebastián International Film Festival. 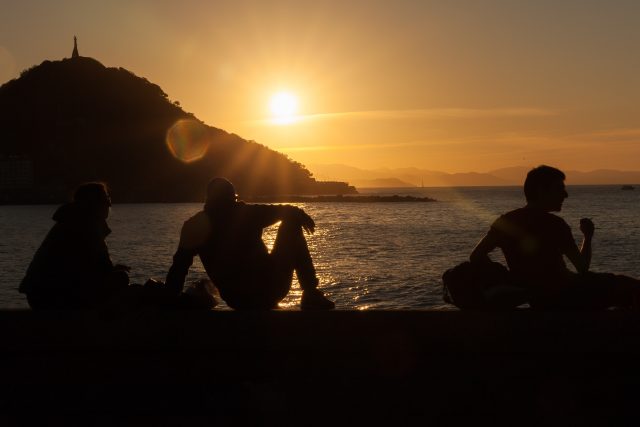 By now we’ve reached Calle Ramón María Lili, with the tang of the ocean in the air, and another iconic bridge, La  Zurriola, also dating from the 1920s and sporting round lampposts meant to evoke lighthouses. Here, where the Urumea meets the Cantabrian Sea, sometimes you’ll see sea waves crashing into the edge of the city. To the right is the Kursaal, a onetime Belle-Époque casino hotel rebuilt in 1999 into a modern symbol of the new San Sebastián, designed by Spanish starchitect Rafaeo Moneo.

Taking the bidegorri bike lane to the right gets us to Zurriola Beach, known for its funky scene and its surfing (whatever time of year, you’ll probably come across a few surfer dudes and dudetters, either on bike as well or walking surfboards in hand. This is a great spot to stop off and join the locals of all ages hanging out at the beach or waterfront (sunset? Absolutely, if at all possible!).

The ocean, in any case, is a great place to finish up our little pedalling excursion – facing the Big Blue that has helped make this great city of Donostia what it is.