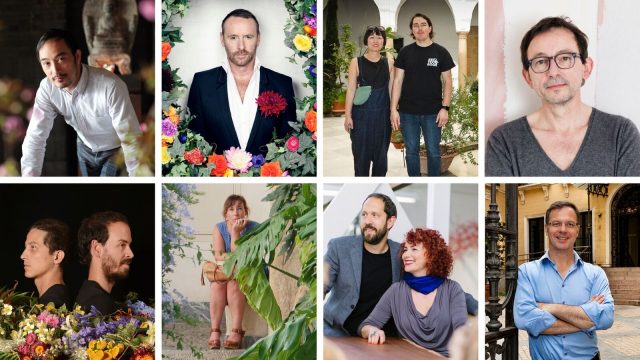 The ancient, atmospheric, labyrinthine old quarter of this Andalusian city on the Guadalquivir River is known for its history, its winding cobblestone lanes, its grand mosque/cathedral, and its lovely patios. And indeed, those patios become the focal point of one of the city’s annual highlights, the Festival de los Patios (the first half of May in 2018) when they’re dressed to the nines with colourful flowers all in competition to be the most impressive.

Well, it seems the locals aren’t satisfied with a courtyards flower festival just once a year. Starting today and running through October 29, they’re launching a new annual event called FLORA, in which a highly select handful of Spanish and international flower maestros will be invited to adorn the patios of nine of Córdoba‘s most iconic buildings with their particularly exuberant, artistic creations. And the public gets to ogle it all for free.

The contrast of cutting-edge floral artistry in the setting of the traditional old courtyards of grand edifices such as Orive Palace and the Posada del Potro is sure to be stunning. Here are thumbnails of the eight flower powerhouses invited to the inaugural edition of FLORA:

Mexico City florists Ramiro Guerrero and Alberto Arango have a signature style featuring bold experimentation in shapes, colours, and materials. For guys who taught themselves flower arranging from zero, they’ve blossomed (so to speak) into an amazing pair of true artists, an inspiration many of us aspiring to anything new could learn from.

The London firm headed by Robert Hornsby likes to say it delivers “flowers with attitude”, and judging from both their individual commissions and public installations like a 35-square-metre (377-sq.-foot) recreation of a painting by Flemish master Ambrosius Bosschaert the Elder with 26,000 tulips, peonies, carnations, freesia, calla lilies, and roses at the National Gallery, it’s safe to say it’s no idle boast.

A Spanish fashion designer who traded the catwalks for the world of blooms, she currently runs her own floral consultancy, Elisabeth Blumen, in Madrid‘s Carabanchel neighbourhood, and works with the Spanish and international fashion industry as well as distinguished cultural institutions such as the Thyssen-Bornemisza and Reina Sofía museums.

Here’s a “botanical design studio” from Australia, run out of a converted Melbourne warehouse by South Korean Wona Bae and Tasmanian Charlie Lawler. With a philosophy of trying to reconnect people with nature, one of their signature arrangements is the “monstera chandelier”, hanging installations of palm fronds and the flowering monstera (aka Swiss cheese plant), native to southern Mexico and Central America.

That one is an engineer and one is an architect is reflected in the stunning work of this husband-and-wife team, whose San-Francisco-based Waterlily Pond has for 16 years been wowing wedding and other event guests as well as visitors to cultural institutions such as the de Young Museum and the San Francisco Museum of Modern Art. Their large-scale works (up to 1,000 kilos/2,200 pounds) are particularly jawdropping.

A French architect and university lecturer with a passion for “vegetal design”, whose installations blend materials from nature with manmade elements, creating a delightful and eye-catching synthesis – a large-scale example of which is his imaginative hump-shaped house near the city of Reims, blanketed in grasses, herbs, and  flowers.

Last but most certainly not least, one of the movers behind FLORA is also one of the world’s best known floral designers. With an 18-year-old consultancy based in Flanders, Belgium, de Bruyne has created an impressive legacy in the world of international flower design with commissions and competition all over the world as well as teaching and writing on the subject – even creating his own unique variety of climbing lily.

Quite a lineup, eh? A distinguished international panel will award three prizes, and they’ll have their work cut out for them, because all of these horticultural stars are among the best in the world. Whatever the result, the city of Córdoba and the lucky viewers will be the winners.