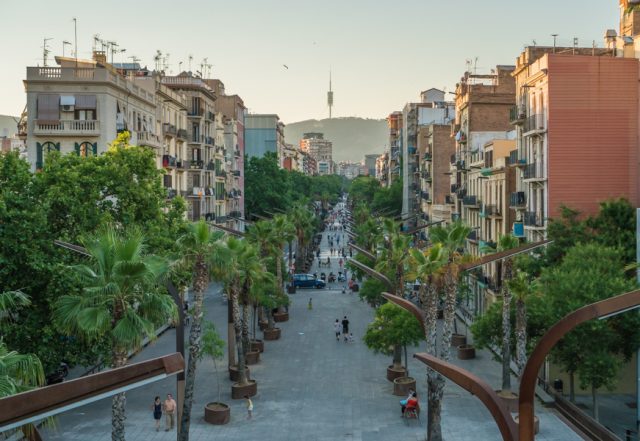 The working-class district of Sants in Barcelona‘s south is best known for its enormous train station – Spain‘s second largest – which connects the city to most other destinations throughout the country. So tens and hundreds of thousands pass through this neighbourhood every year, yet very few ever stay for a look. So after seeing the various massively (and lately infamously) popular areas of this fantastic city, from the waterfront El Born to the Rambles to the Barri Gòtic all the way up to the Sagrada Familia, I’d heartily recommend that visitors looking for a taste of the “real” Barcelona hop on the Metro and come for a closer look at Sants.

Before it became part of the city of Barcelona in 1897, Sants was an independent town with a booming industry, especially in the textiles sector. And today that industrial, working-class legacy is still readily apparent as you stroll its streets, except that many of the old factories have now been resurrected as libraries, schools, social centres, and other uses.

Some happen to think that Sants is not of much interest touristically speaking. But though it lacks the flashy cathedrals and Modernist landmarks you’ll find elsewhere in town, what I especially love about this area is its authenticity as a real neighbourhood where visitors can experience a side of Barcelona that’s not tarted up for tourists but instead shows how locals really live their lives.

The best way to explore, of course, is on foot, starting on its high street, Carrer de Sants – once a simple country path connecting the 19th-century town to the city of Barcelona and now said to be Europe’s longest commercial thoroughfare – admiring the 19th- and 20th-century architecture; browsing its hundreds of shops; popping into the 104-year-old, tan-brick Sants Market (below) for a wander among its dozens of colourful food stalls; and striking off into the maze of side streets along the way.

Other landmarks of note include, right by the train station, the spectacular Parc de l’Espanya Industrial (above), a park built in 1985 on the site of the old textile mill “La España Industrial”. A central feature here is a manmade lake where you can go rowboating and feed the ducks, and there are also a number old industrial chimneys converted into works of art, as well as newer works of art, such as a giant metal dragon and vintage sculptures from Barcelona’s landmark 1929 World’s Fair in nearby Montjuïc. 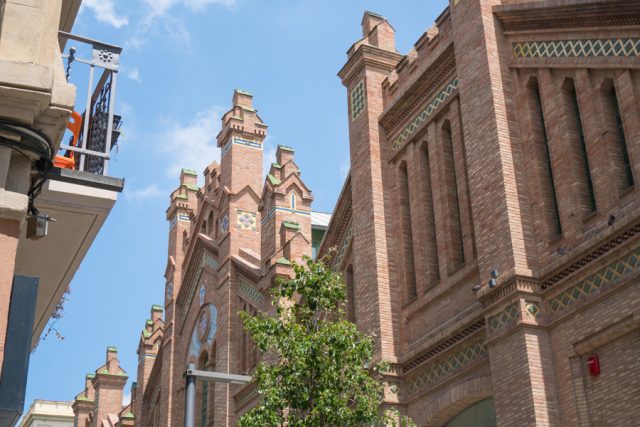 Another spot of definite interest near the market is the several railways that were recently redeveloped into pedestrian walkways and gardens along Carrer Antoni de Campany, which provide great views out over the city, including its major hills, Montjuïc and Tibidabo.

And if you happen to be here in mid to late August, you’re especially in luck, because you’ll be able to experience the neighbourhood’s weeklong festa major celebrated in honour of its patron saint Bartholomew the Apostle. Several streets become pedestrian and are lavishly decorated to host various festivals and events centred around butifarra (Catalan sausage); hot chocolate; concerts; parades with charismatic characters such as devils and papier-mâché “giants”; fireworks; and Catalan traditions such as the stately sardana dance and castellers (human towers). Alongside the festa major, by the way, a festa alternativa is also celebrated, with funky events including water fights, a “punk tapas” contest, and concerts of rap, reggae, and more.

Sounds like fun, eh? But hey, festivals or no, this is one non-touristy side of Barcelona you should definitely put on your agenda.