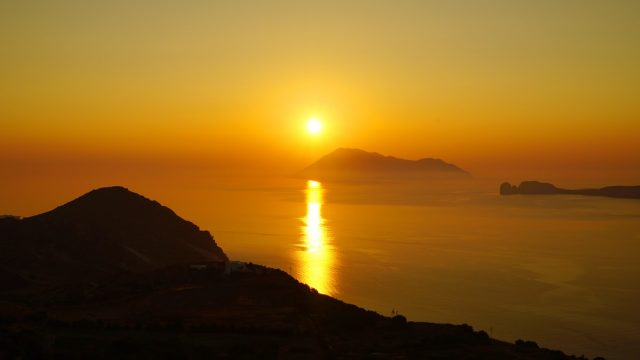 The Mediterranean‘s most famous group of islands is also one of the great and most classic sailing adventures of all time. The 220 or so Cyclades Islands (the name means “circular”, referring to their perceived arrangement per classical Greek mythology around the sacred isle of Delos) span 2,572 square kilometres (993 sq. miles) of the sundrenched, azure Aegean Sea southeast of mainland Greece, from Kea the closest to Ydrousa the farthest. And while many share similar characteristics (including mighty sweet beaches), they’re also different enough to make a visit to each a truly singular delight. 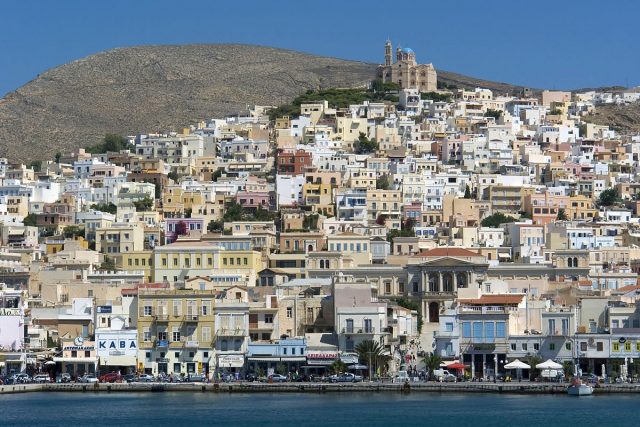 For example, approaching the isle of Ermoupoli, the capital of this island and of the Cyclades as a whole (two to 4 1/2 hours by sea from Athens, depending on type of ferry, and just 35 minutes by air, if you must) you note the white and neoclassical mansions and other buildings cascading down the hillside to the water’s edge. This handsome town of some 14,000 inhabitants isn’t particularly old by Greek standards (founded in 1820), but it is definitely inviting, a pleasure to stroll its cobblestone streets and hang out in its waterfront cafés. After dark it’s enveloped in a warm glow, with an equally inviting, low-key nightlife, all beneath a star-spangled sky you won’t see back in Athens.

The island’s second-largest town, hilltop Ano Syros, is much smaller but also much more historic (built by colonists from the Venetian Republic in the 12th century), and still preserves a mediaeval feel. Elsewhere on the island you’ll find one of Greece’s oldest archaeological sites, Kastri, also on a hilltop and dating back to the prehistoric Bronze Age, circa 2200 BC. 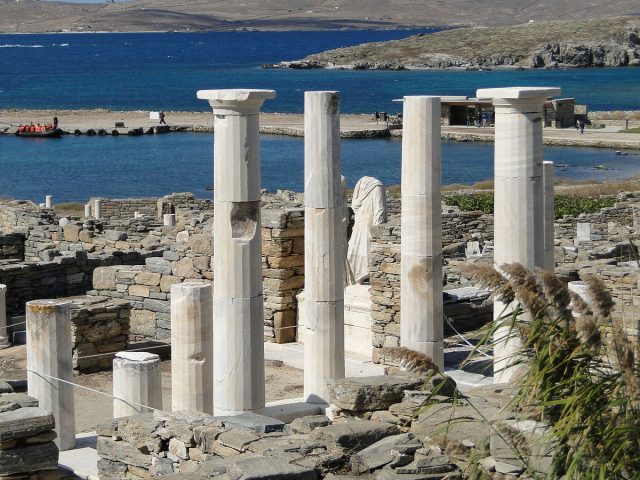 About an hour 15 minutes due east from Syros is the diminutive historic centre of the Cyclades, revered as the birthplace of Apollo, the classical Greek god of beauty and light, as well as Artemis, goddess of the hunt, wilderness, and childbirth. No one lives here now except for a handful of caretakers of its astonishing archaeological sites, which make a day trip from other islands an absolute must. Landmarks include myriad temples, squares, fountains, villas, and an amphitheatre.

This is, of course, one of the most internationally famous destinations in these islands, whose charming, picturesque main town Chora and various beaches have become all about holiday hedonism, including some of the Mediterranean’s hardest partying. Roam amid the town’s white houses, fancy boutiques, iconic windmills, inviting seafood restaurants, waterfront “Little Venice“, and nightspots (including a thriving summertime gay nightlife), and make the happening scene at beaches like Paradise, Super Paradise, and Elia. Holiday settlements line the coastline, but there’s also another side of the island, where the rhythm is far more laid back and traditional in towns and villages such as inland Ano Mera. In Mykonos more than in most of the rest of the Cyclades, you can really have it all. 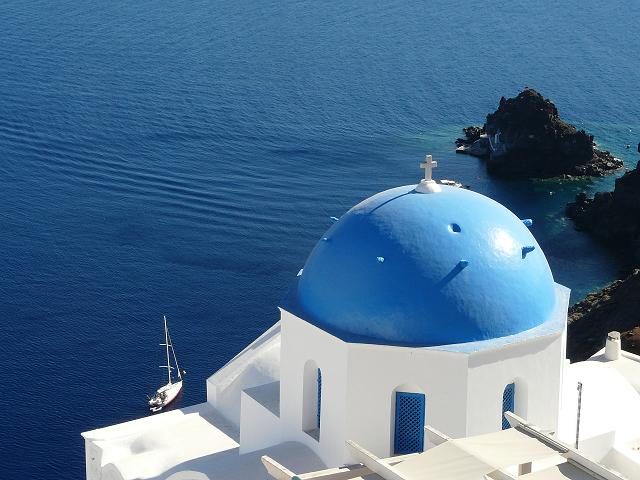 Nearly or just as famous as Mykonos, this half-moon-shaped island surrounding a collapsed volcanic caldera (whose eruption and collapse is thought to be a source of the Atlantis myth) is a spectacular site in and of itself, a work of art crafted both by nature and man. The striking natural setting is supplemented, perched on its plunging cliffs, by hundreds of whitewashed houses, blue-domed churches, and cobblestone streets from which the sunsets over the nearby island of Oia should be inscribed in the book of sunset’s greatest hits. Add to that the fetching black-sand beaches, flourishing native Santorini wine, Akrotiri Bronze-Age archaeological site, and you have a Cyclades island experience you will never, ever forget. 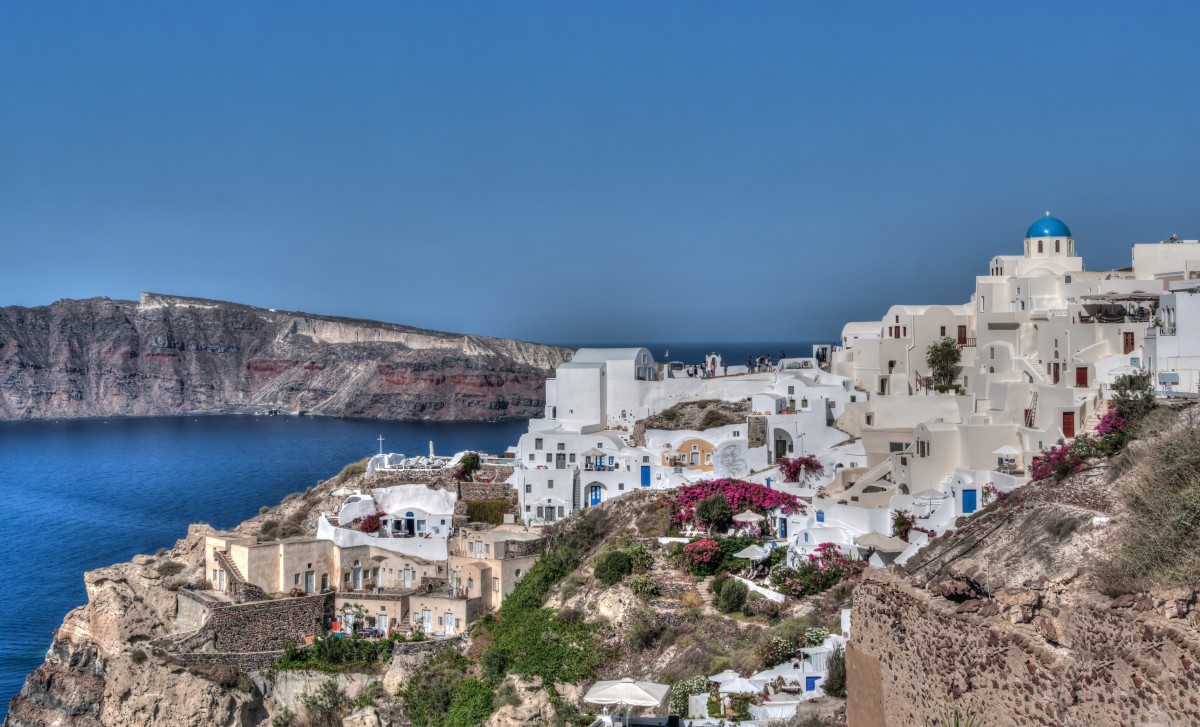 One of the lesser known of the Cyclades, between Mykonos and Santorini, this tiny (just 109 square kilometres/42 sq. miles), hilly isle doesn’t have flashy sites but rather is a mix of summer-season booze-fuelled partying in and around the west-coast towns of Chora (the capital), Mylopotas, and Ormos; quiet inland villages where visitors can get a peek at the timeless lifestyle and rhythm of traditional Greek island life; and 40 beaches included castaway coves you might get to have practically to yourself.

There are of course many, many others to explore – Amorgos (gorgeous scenery and site of Luc Besson‘s 1988 film The Big Blue), Naxos (the largest island in land area, as well as the greenest), and Paros (another traditional/nightlife mix, with a landmark 4th-century Byzantine church and dramatic Klimbithres beach with its naturally sculpted swimming coves), being among the more notable. In addition to Mykonos, we’ve already covered Milos, and in upcoming posts we’ll be moving on to other of the Cycladic Islands, a sunsplashed Hellenic wonderland waiting to be marvelled at.