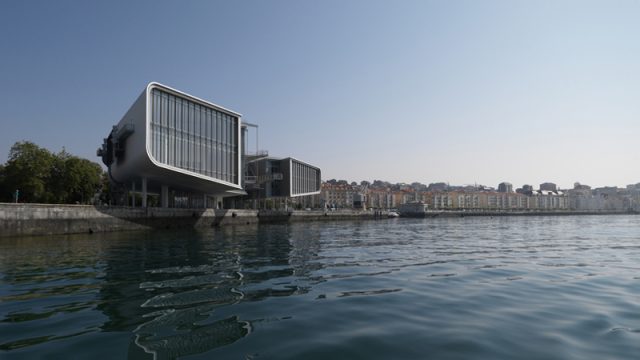 Much awaited these past five years, the city that’s an undersung gem of green north Spain welcomed the opening this summer (attended by Spain’s king and queen) of a wonderful new art centre, designed by Pritzker Prize-winning, 79-year-old Italian starchitect Renzo Piano. And as a Santander resident who has seen my share of fine art museums, I’m here to tell you that the shimmering Centro Botín on the bay is definitely all it was cracked up to be.

The first thing you notice about this 80-million-euro museum is that it seems to float (or “fly’, according to Piano), thanks to the stilts that raise it to the level of the treetops in the adjoining Pereda Gardens. Not only does it mean the views of the bay aren’t blocked but on a hot or a wet day, you can also take shelter underneath the centre.

The next thing you notice is that Centro Botín consists of two buildings which are accessed via a multi-level walkway dubbed the “pachinko”, inspired by the movements in the eponymous Japanese pinball machine. Piano designed walkways between the two buildings where people can move backwards and forwards – over and back – and up and down – just like a pinball. Even on Mondays, when the centre is closed to the public, there is a constant flurry of movement and activity as people stroll around with their phones and cameras, exploring the space and enjoying the city from its new vantage points.

Up on the roof terrace, you can see and even touch the hand-size mother-of-pearl ceramic discs that act as a skin for the centre and “dance” with sunlight (Piano likes to call it “flirting” with the light) even on the greyest of days. It took a whopping 270,000 tiles to cover the 10,285 square metres (110,706 sq. feet) of surface!

Back down below, you’ll see Pereda Gardens has undergone its own transformation. An underground tunnel channels the traffic away from this area which means green spaces have tripled and the park has doubled in size. Landscape designer Fernando Caruncho is responsible for the turquoise pavements and intelligent yet playful lines that pay homage to the park’s sculptures and monuments and visually connect the city to the centre and the bay.

And what’s inside? First off, the star inaugural exhibition (through 10 September) is of German installation artist Carsten Höller, which features a circular elevator bed in which you can sleep; a tank in which to immerse yourself; and a smile-inducing selection of other exhibits including sliding doors and an illuminated walkway. Also currently on exhibit is a series of drawing by Francisco Goya entitled “Agility and Audacity” (until September 24), as well as “Art at the Turn of the Century”, a selection of works from the Botín Foundation’s permanent collection (through January 31).

You’ll find lots happening outside, as well, with daily creative activities in the gardens and amphitheatre. And there’s the funky café under the building, run by star chef Jesús Sanchez, who recently was awarded a second Michelin star for his Cenador de Amos restaurant across the bay. A perfect spot to raise a glass of local vermouth to Renzo Piano, the Botín Foundation, and the many others who have made one of Spain’s most exciting new cultural landmarks a reality.