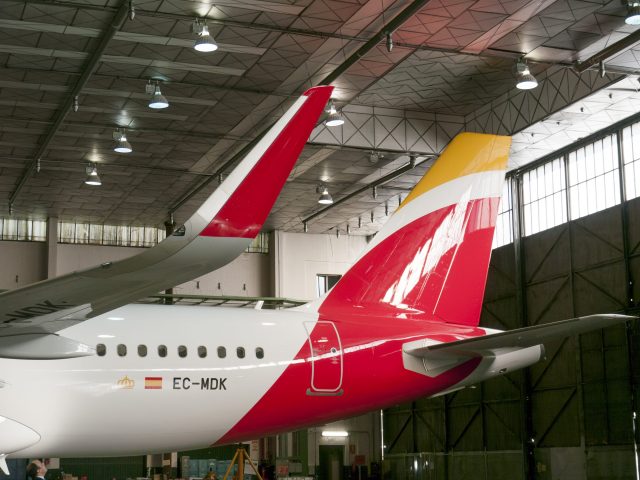 We at Iberia have more than most shared humanity’s fascination with flight, from Greek mythology‘s Icarus to the Wright Brothers to the latest, cutting-edge aviation technology. Along the way, we’ve racked up some pretty impressive history and statistics of our own. Following up on our first, second, third, fourth, and fifth installments, allow us to share 15 final fun facts with you for our 90th birthday, this time focussing mostly on our fleet, navigation, and airport operations.

76. Did you know there are shark fins cutting through today’s skies? In this case, they’re known as Sharklets, specialised wingtips on the Airbus A320, 2.5 metres (just over eight feet) tall, designed to maximise aerodynamic efficiency. They reduce air resistance by sex percent, resulting in shaving jet fuel usage by three to four percent (and therefore saving some 900 tonnes of carbon emissions per aircraft per year).

78. An airway is a flight path followed by flying aircraft guided by waypoints identified by radio signal. Put another way, the airway is the “highway” and the fixed waypoints like the traffic signals and signposts.

79. Pushback tugs are the powerful, low-slung tractors which tow aircraft from jetways out to the takeoff runways. They’re needed because aircraft can’t go in reverse on their own – did you know that?

80. Not surprisingly, the aeronautical alphabet (alpha, bravo, charlie, delta, etc.) used on commercial aircraft is international. Designed with an eye toward standardising aviation communications and eliminating the possibility of miscommunication, it derives from English and dates back to the system set up by NATO in the 1940s.

81. Why do flying aircraft leave white jet exhaust trails? When the heated air expelled from jet engines hits the cold air high up in the atmosphere, it condenses into tiny water droplets which freeze rapidly. Such trails are usually straight, but not always, as variations in outside-air-temperature differentials can cause uneven freezing of those water droplets.

82. Do you know what airport slots are? There are two basic types. Aeronautical slots, aka takeoff slots, are the order and timing of aircraft takeoffs in order to minimise delays, while historical slots govern the number of times airlines may fly to a particular destination.

83. All these airport codes you see on your tickets – LHR (London Heathrow), JFK (JFK Airport in New York City), MAD (Madrid Barajas), BCN (Barcelona El Prat) – are set by IATA (International Air Transport Association), and number around 20,000. Some are fairly straightforward, deriving as above from city and airport names. But others are archaic, obscure, and occasionally puzzling or amusing, such as ORD (Chicago O’Hare, standing for its old name Orchid Field), XRY (Jerez de la Frontera in Andalusia, deriving its code from the sherry which the city is known for), and SUX (Sioux City, Iowa, which they long tried to get changed but now embrace with tongue in cheek).

84. Flaps are devices mounted on the edges of aircraft wings which extend during takeoffs and landings, meant to increase lift and stability.

86. To verify that all components of our aircraft engines are in optimal working order every so often between flights, our aircraft maintenance techs inspect them with sophisticated devices called borescopes, together with immersion in fluorescent liquid to reveal damage not visible to the human eye.

87. When our aircraft are taking off, landing, and in the air, their crews are in constant satellite communication with ground-based Iberia personnel in addition to air traffic controllers at their airports of departure and arrival. This is true even where there’s no satellite coverage, such as certain parts of Africa, thanks to special attenae carried on board.

88. Visitors to Madrid Barajas Airport’s Terminal 4 will note a rich palette of colours in the airport design elements on ceilings, support structures, and windows. They range from blues in the northerly sections down to reds in the south of the terminal.

89. Our Airbus A340-600 carry a tail camera which allows passengers to access its real-time images from their seatback entertainment system.

90. Ever wonder how cold it is out in the air you’re flying through? Exact temperatures depend on the altitude, but most commercial aircraft normally fly between 30,000 and 40,000 feet (10-12 kilometres), which generally means exterior air temperatures between -50º and -65º Celsius (-122 to -149º Fahrenheit).

Well, we really hope you’ve enjoyed our little series! See you up in the wild blue yonder…