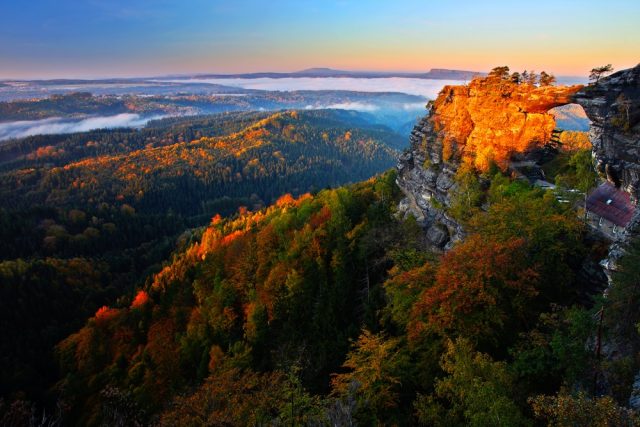 When you read about spectacular autumn foliage and leaf-peeping, the vast majority of the attention gets focused on places like the northerly regions of the USA. But many Europeans can tell you that large parts of the the Old Continent also burst into fall colours come September and October. The loss of trees’ photosynthesis and chlorophyll as winter approaches is our eyes’ and cameras’ gains, with landscapes dramatically transformed by the turning of their leaves. And if you’re fortunate enough to be traveling in certain fortunate countries – or looking for an upcoming getaway – here are 25 of my favourite spots for Europe fall foliage – leafy seas of breathtaking reds, yellows, ocres, and purples!

Luscious leaves are on glorious display at Vienna‘s Stadtpark and Rathauspark, but to appreciate the full sweep of Alpine landscape swathed in colours, I’d recommend venturing out to the country’s small villages, such as fairytale lakeside Hallstatt (just over three hours west of Vienna) and Alpbach, a Tyrol ski resort which has won all sorts of “beautiful village” awards.

Lovely capital Prague features several also lovely parks with trees such as weeping willows, oaks, and chestnuts. The largest and most popular is Stromovka, on a plain overlooking the city, and on the other side of the Moldau River, Petřín Hill is also fetching, and easily reachable via funicular. Outside the capital, there are more than two dozen nature reserves where  Český Ráj, Moravský Kras, Šumava, and České Švýcarsko (Bohemian Switzerland, top).

Much of the most impressive foliage tends to be clustered around central and northern Europe, and it doesn’t get any farther north than Scandinavia – while autumn temperatures are still quite pleasant. A 20-minute train ride north north of Copenhagen, a green space called Dyrehaven (Deer Park) is a UNESCO World Heritage Site which is home to ancient trees – especially its iconic oaks – and, yes, good-size herds of red and fallow deer. The colours here tend to be dark and rich. 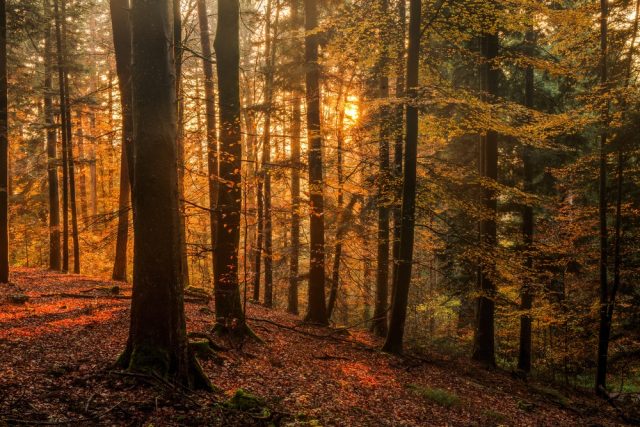 A veritable foliage superstar, with many varied options and roots. You can’t go wrong in amid the varied trees of the Black Forest (above); the beeches of the Kellerwald-Edersee National Park, also a UNESCO World Heritage Site; and the Taunus Mountains less than an hour north of Frankfurt (especially lovely for biking). If you’re headed to Munich, the idyllic, enormous Englischer Garten is a real treat, with its foliage ranging from coppery to nearly purple.

Southern Europe, too, has its moments when it comes to foliage. Parts of northern Italia get even more bella come fall – especially Umbria and Tuscany, with the latter’s vineyards offering a different look, enveloped in reds, oranges, and yellows. And of course the country’s Alpine northernmost precincts, such as the Aosta Valley and the South Tyrol, add impressive mountain scenery to the mix.

The hills around Oslo and the forests along the Akerselva River are particularly lovely, and many make the five-hour drive north to see the spectacular vistas Jotunheimen National Park, home to the country’s highest mountain, Galdhøpiggen. 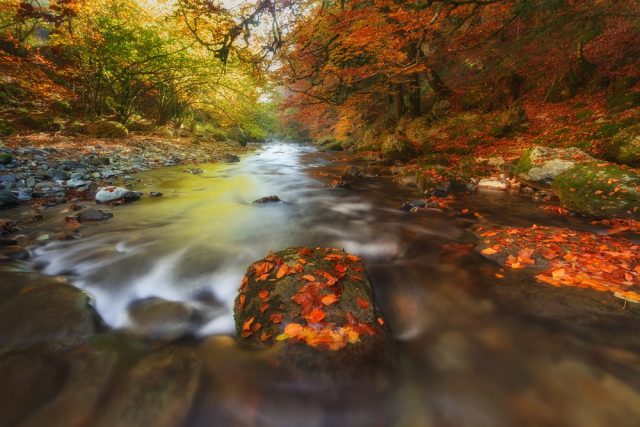 This country’s great diversity of ecosystems and landscapes offer a rich menu indeed, especially up in the northern areas of the country. Top choices for leaf-peeping include Irati in Navarre‘s Pyrenees (above), Europe’s second largest fir and beech forest (second only to Germany’s Black Forest) and remarkable for its tonalities. Neighbouring Aragón has the Ordesa and Monte Perdido National Park, thick with pines, firs, and ashes. But the south, too, has its magic moments, such as the lovely Ronda Range in Málaga, aflame in ochre-leafed chestnuts amid the green holm oaks and strawberry trees.

You can see the colourful magic at work in the gardens that dot Stockholm, with ochres and oranges especially popping thanks to their reflections in the canals. The venerable open-air museum of Swedish traditional architecture and culture Skansen is also a marvelous place to take it all in, as is the idyllic town of Haninge, 20 minutes south of centre Stockholm.