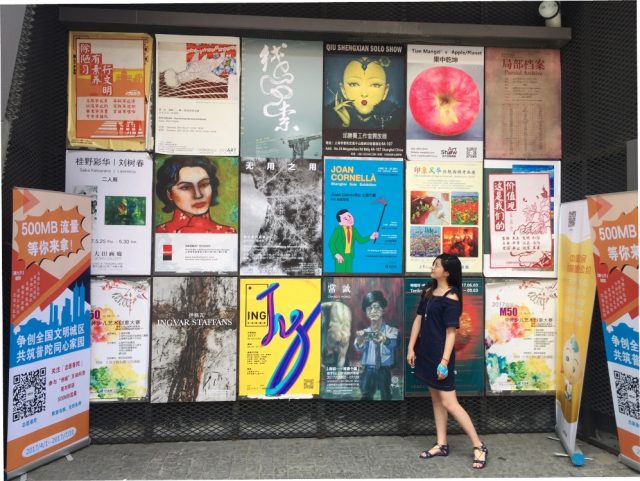 It’s so great having a local friend who can get you right to the coolest stuff in town – especially when that town is a sprawling, enormous city like Shanghai. And these days, creative Shanghai has a lot of cool to go around. On a recent weekend, my friend and I proved it in five ways.
The day I arrived, my friend booked us an an hourlong massage at the Subconscious Day Spa (183 Fumin Rd.) in the French Concession, the historic central neighbourhood dating from the late 19th and early 20th centuries. In a zenlike modern space, the masseuse used four organic essential oils to massage away the stress of the long flight from Europe.

Then we rented bikes and took a ride to a spectacular brunch at M on the Bund (20 Guangdong Rd.),  on the fifth-floor terrace of one of those 1920s Art Deco buildings along the Bund, with a chic atmosphere and a spectacular view toward the modern skyscrapers of the Pudong district across the Huangpu River.

Afterward, we hopped into a taxi (you can also take the Metro‘s Line 13 to  Jiangning Road) to Moganshan Road, a onetime warehouse/industrial district not far from downtown that since its establishment by an artist in 2000 has become, like many such districts in various cities of the world, a magnet for artists, culture, hipsters, and young people. The afternoon that followed so-called M50 Creative District was one “wow” after another, hopping between some of the more than 120 art galleries, along with stylish cafés and grafitti-style street murals. Not all these artists were Chinese; I was particularly struck by Spaniard Joan Cornellà and his dark, even disturbing comics.

Then it was time for dinner, and our choice was another rooftop spot on the Bund called The Fellas Terrace (7 Yan’an East Rd., 7/F), with good pizzas and other Italian food, a pretty crowd, and more spectacular views out over Pudong. That was followed by drinks and dancing at a hot nearby club called Unico by Mauro Colagreco, (3 Zhongshan Dong Yi Rd., 2/F), where the tunes are Latin and jazzy house.

The followinh night, my friends and I enjoyed a copious, tasty, and inexpensive dinner at Nepali Kitchen (819 Julu Rd.), followed by a jazz set at one of their favourite spots in Shanghai, the small, intimate Heyday Vintage Jazz Lounge (50 Tai’an Rd.), steps away from the famous Ferguson Lane. Stylish and classy, it harks back perfectly to the Art Deco heyday of the 1920s and 1930s.