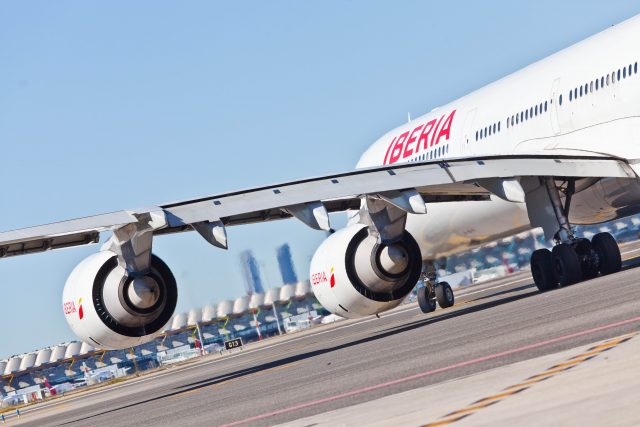 We at Iberia have followed humanity’s fascination with flight, from Greek mythology‘s Icarusto the Wright Brothers to the latest, cutting-edge aviation technology. Along the way, we’ve racked up some pretty impressive history and statistics of our own. Following up on our first, second, and third installmentes, allow us to share 15 more fun facts with you, following our first and second posts of 90 cool facts for our 90th birthday.

46. Until not long ago, our short- and medium-haul cockpit crews carried all flight documents in paper form. But in the past couple of years we’ve installed a digital, electronic-tablet-based EFB (Electronic Flight Bag) system which in addition updates in real time various flight indicators and statistics, whilst saving 30 kilos (66 pounds) of onboard weight – therefore lowering jet fuel use and carbon emissions.

47. Did you know that Iberia is a pioneer in the utilisation of a new pilot-training system called ETB (Evidence Based Training)? Designed to maximise flight safety and efficiency, it’s a programme which collects data about each crew member’s flight knowledge and uses it to emphasise material in which they fall short.

48. Our VIP lounge at Madrid‘s Barajas Airport has a “wine corner” which lets passengers enjoy some of Spain’s top DOC wines, including those served inflight.

49. Launched back in 1991, Iberia Plus was Europe’s first airline loyalty programme.

50. We now also have another loyalty programme, On Business, for small and medium-size businesses to accumulate Avios and On Business Points on Iberia, British Airways, and American Airlines. These can be redeemed for tickets and upgrades, and members can manage their tickets and expenses in real time, with data regarding when tickets have been used and by whom.

52. Our employees always try to give back. Mano a Mano (Helping Hand), the NGO of Iberia employees, takes advantages of unused cargo space to send humanitarian aid – foodstuffs, school supplies, medicine, toys – to destinations where it is needed.

53. Iberia employees also have an NGO called Envera to assist the disabled and promote their integration into society.

54. Iberia, in collaboration with the travel software giant Amadeus as well as UNICEF, operates a microdonations programme which allows passengers booking on Iberia.com to donate three to 20 euros to UNICEF.

55. Speaking of giving back, especially in times of natural catastrophe, our entire company pitches in, organising shipments of sanitary supplies, foodstuffs, clothing, and more, as well as facilitating rescue and NGO volunteers. In one notable 1998 case, when Hurricane Mitch (the second deadliest Atlantic hurricane in history) hit Honduras, the company contributed to the building of a new home for the injured, the Colonia Iberia.

56. Iberia has also collaborated for years with Spain’s national transplant organisation to transport dozens of organs annually needed for transplantation.

57. Flying ace Juan Velarde, star of the Spanish acrobatic flying team Bravo3, which has repeatedly medalled at the European championships, also happens to be one of our fine Iberia pilots, working transatlantic routes.

58. Another Iberia pilot by the name of Antonio Cabanas is also the author of a bestseller in Spain called El Ladrón de Tumbas (Tomb Raider).

59. And speaking of distinguished authors, Valencia-born prizewinning writer and columnist at El País newspaper Juan José Millás worked at Iberia for nearly 30 years, including as director of our inflight magazine Ronda.

60. These days (since 2004, to be exact), we have a second inflight magazine in business class, Excelente, which in 2016 took top honours at the prestigious Travel Media Awards as “best customer magazine”.

Stay tuned for our next installment next week!