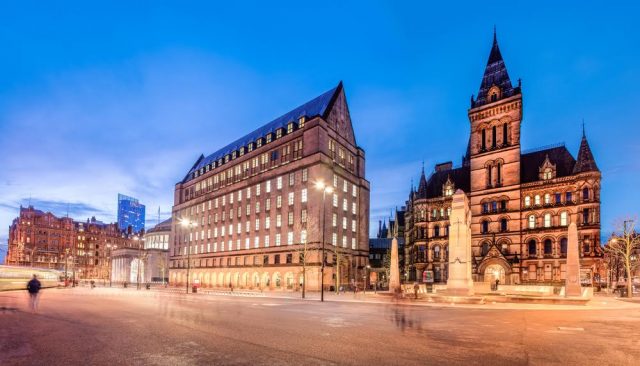 
Manchester, England, England
Across the Atlantic Sea.
And I’m a genius, genius.
I believe in God,
And I believe that God
Believes in Claude, that’s me.

The first I ever heard of this city in northwest England was from that groovy song from the pyschadelic 1960s Broadway show Hair: Kind of a throwaway reference, actually – but hey, sometimes these things stick with you. Of course, the reality of Manchester in those days was far from groovy and psychedelic. As one of the cradles of the 19th-century Industrial Revolution (particularly in textile manufacturing), the city was for generations vibrant but also grimy and Dickensian. But as traditional heavy industry declined after World War II, so did Manchester, with gritty urban blight and high unemployment.

Since the late 1990s, however revitalisation in the spirit of the “new urbanism” has transformed the United Kingdom’s third-largest city (pop. 530,000), with mouldering, late 20th-century eyesores razed and redeveloped into cool new facilities and attractions; historic gems burnished to a high gloss; and a hip, multicultural vibe fed by robust immigration. And of course there is also the fact that the local football club, Manchester United, has become one of the powerhouses of the world. In short, Manchester is a British success story, and the concert tragedy of May 2017 can’t take the shine off that. 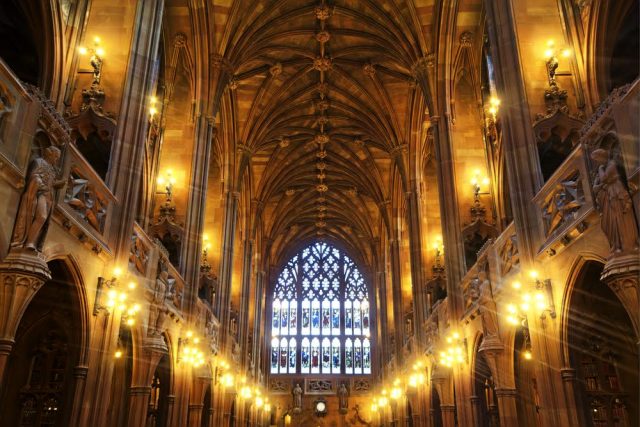 Those historic gems of which I spoke bear witness to a long and fascinating history dating back to Celtic tribes and the subsequent 1st-century-AD Roman settlement of Mamucium. Of course, not all that much remains from before the 19th century, most notably the Anglican Manchester Cathedral on Victoria Street in city centre. Built and enlarged/renovated over the course of centuries beginning in 1421, it’s an intriguing mix of mediaeval and Gothic atmosphere (including its most intriguing artifact, a small Angel Stone carving dating back to an early-8th-century Saxon church once on this site) and modern elements such as stained-glass windows created in the last decades of the 20th century to replace originals destroyed in World War II. And Chethams Library is a lovely sandstone building also dating back to 1421.

But many more of the city’s most distinguished historic landmarks date from the 19th and early 20th centuries, such as the town hall, a neo-Gothic pile built in 1877 that you can wander around for free. Many consider the city’s top landmark to be one particular hall of the University of Manchester (which evolved from the Mechanics’ Institute founded in 1824). John Rylands Library (above) with its Hogwarts-like main hall is an also neo-Gothic masterpiece, opened in 1900 with a reading room that’s nothing short of spectacular and a collection of precious books and tomes including mediaeval illuminated manuscripts and a Gutenberg Bible. 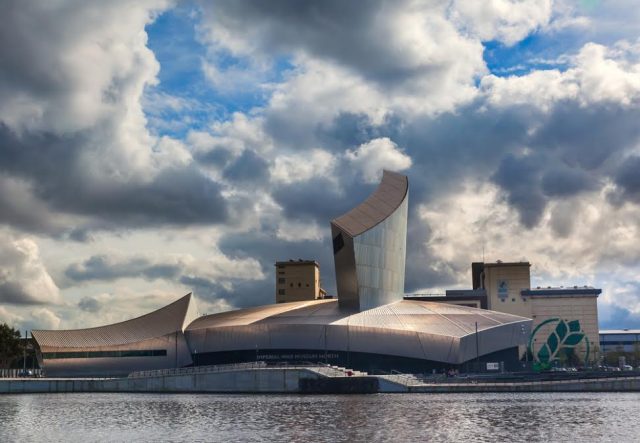 Even more distinguished than its historic sites is the truly impressive amount of Manchester culture on offer, especially Manchester museums. Longstanding institutions include the Manchester Art Gallery, with a superb collection of Old Masters and 20th-century British art; the Whitworth Art Gallery with similar masterpieces as well as one of the UK’s best textiles collections; and the Manchester Museum, focusing on archaeology, ethnology, botany, geology, zoology, and coins.

Furthermore, in tune with Manchester’s industrial legacy and high-tech present, the Museum of Science and Industry, housed in the world’s oldest train terminus entertainingly explores that legacy, along with the technological present and future. Meanwhile, MediaCityUK, the BBC’s northern headquarters, offers pretty cool 90-minute tours of stages, sets, and facilities. And the People’s History Museum presents an engaging, often entertaining, and all around truly superb recounting of the history and trends of modern Britain (meaning the last 200 years), from Thomas Paine’s Rights of Man up through recent times (IMHO almost worth a visit to the city by itself). Also very innovative (apart from its swooping, spectacularly modern design by starchitect Daniel Liebeskind), the Imperial War Museum (above) out near MediaCityUK looks at war from the point of view of how it affects people and society. 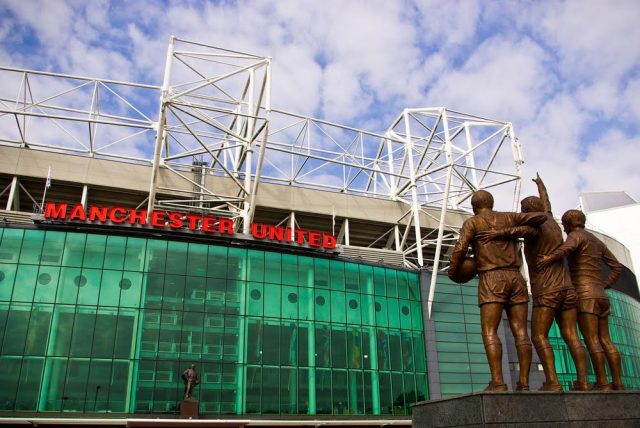 Finally, if you’re a footy fan, by all means head out east to Old Traffod Stadium, home of Manchester United, where the English Premier League football season runs August through May and you can also check out the museum and take a tour of the whole thing. In addition to the club’s own museum, the city’s home to the National Football Museum back in city centre. So sport fans are amply well served hereabouts!

After dark, Manchester nightlife is rightly famous (infamous?) for its diversity and high energy, with some wags going so far as to dub it “Madchester”. Music venues take special pride of place in a city that gave the world the likes of The Smiths and Oasis and still boasts some of the hottest DJ’s in the UK, but especially for a city of this size, the variety is impressive, from hole-in-the-wall pubs to massive raves (with honourable mention to one of Britain’s best gay clubbing scenes). Mix that with a variegated and increasingly sophisticated menu of restaurants and lodging, and Manchester, England, England is inviting, inviting indeed.