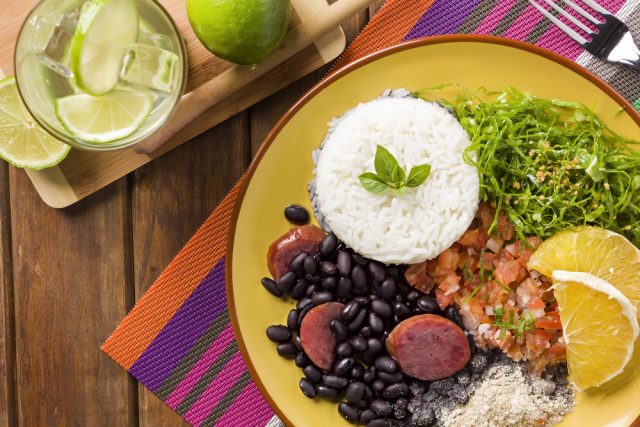 While Brazil does have many dishes popular across the country, such as the iconic bean stew feijoada (top), its geographical enormity and diversity comes with a complex, intensely savoury, and generally impressive variety of cuisine. It’s a variety created by, in its sundry regions, both the biosphere and numerous cultural traditions – a mix of Amerindian, Portuguese, African from early on, and more recently, 19th- and 20th-century immigrants from Europe and Japan.

Let’s start with the aforementioned feijoada, shall we? The national dish is a hearty, black-bean-based stew with origins in Portugal, the country which colonised Brazil. It offers a splendid range of textures and flavours, with ingredients besides black beans including white rice, vegetables, bacon, sausage, and pork ribs, sometimes garnished with orange slices and a sprinkling of manioc flour. Since it’s a bit on the heavy side, Brazilians tend to reserve it for weekends – but of course you can find it any day of the week in restaurants all over the country.
A particularly distinctive culinary quirk of Brazilians is their tradition of salgados,  and petiscos, sold in lanchonetes (snack bar), street stands, and bars as pub grub. They’re eaten as snacks, appetizers, and some of the more substantial ones can make a nice little lunch. One of the most popular is coxinhas (above), spiced, shredded chicken in a teardrop-shaped dough shell and deep fried. Empadinhas, meanwhile, are the local versions of empanadas, with as many varieties of filling. Bolinhos (fritters) are most commonly of codfish or shrimp, but there are other variations, as well, including bolinhos de feijoada. Pão de queijo is a tasty cheese bread made with manioc flour and especially popular for breakfast. Particularly popular in Rio de Janeiro,  joelhos are a tasty ham and cheese pastry. 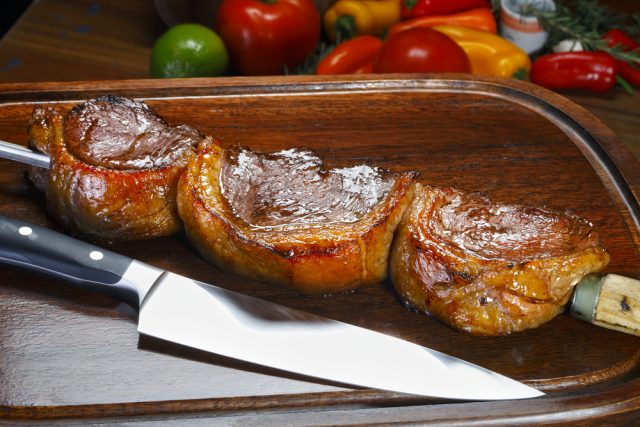 And you’ve likely heard of Brazilian barbecue – commonly called rodizios and churrascarias. Tender, charcoal-grilled steak is a favourite of Brazilians all over the country, brought to the table on long skewers. The best known is picanha (above), whose layer of fat makes the meat underneath especially juicy and tender, but other popular cuts include maminha, which melts in your mouth, vazío, and contrafilé.

In such a large country, there are of course as I mentioned also plenty of regional cuisines. One of the most distinctive is that of Bahia, in the northeast, whose cities most notably include Salvador.  Influenced by African tradition, it relies heavily on palm oil, and one of its signature dishes is acarajé, a kind of sandwich of fried beans stuffed with shrimp (it’s especially popular at street and beach stands). A bit farther north still, up in Ceará (capital: Fortaleza), baião de dois is a popular rice-and-black-eyed-pea dish further flavoured with bacon, dried meat, and cheese.

In the small state of Espirito Santo, just north of Rio, comes moqueca capixaba, a fish stew with tomatoes, onions, garlic, and sometimes coconut milk (a hearty reviver after a night out on the town, by the way). And perhaps the most culinary diverse region of all is Minas Gerais in the southeast, famous for a juicy, semi-soft cowsmilk cheese and dishes such as tutú mineiro, a creamy version of refried beans with pork cracklings and sometimes a fried egg on top. 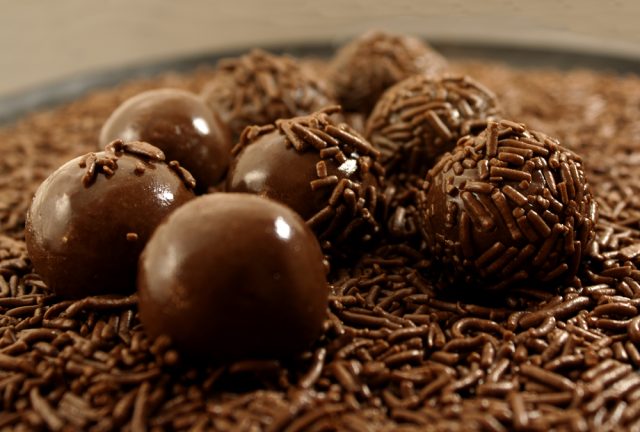 Sweets are also well represented in the Brazilian repertoire, starting with the bounty of tropical fruits available such as guava, açaí, soursop, and passion fruit. But perhaps the best known elaborated sweets are brigadeiros (above), exquisite little balls of condensed milk, butter, and chocolate, covered with chocolate sprinkles. Then there’s quindim, an egg custard not unlike bit like crème caramel but with the addition of ground coconut. My favourite!