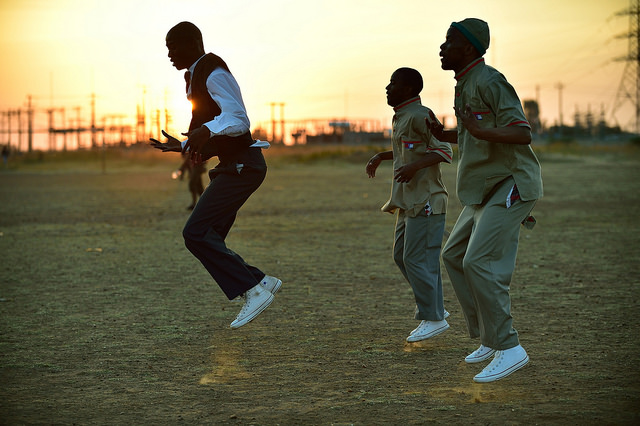 Literally, pantsula translates from Zulu as “to walk like a duck”. It’s an energetic, syncopated urban dance that originated in Johannesburg townships during a traumatic period of apartheid in the 1950s, and is today seeing a resurgence among the black youth (as well as some whites) of South Africa.

To experience and understand it, we travel to the streets of Joburg‘s Tembisa township, where pantsula is part of day-to-day life, with many dancers showing off their skills in the middle of the street and in broad daylight. They stop the traffic and attract the attention of passers-by as they move to the rhythm of carefully planned and extensively rehearsed choreography. The music is played by one of the city’s most famous DJs, and it seems like they have the rhythm in their blood.

The onlookers are thrilled, and they like nothing more than to be surprised by a good dose of music and dancing. They show their appreciation with cheers, whistles and clapping – and then everything stops. They forget their daily chores and let themselves get carried away.

At this point, the audacious dancers now form a circle, and one of the members is now king of the floor. This person dances in the middle of the circle and is even game to start a series of curious juggling acts with an empty bottle. Skill and coordination are shown without losing a shred of that natural pantsula rhythm. And all are of cournse clad in Converse All Stars – no self-respecting patsula dancer would perform in public without All Stars (a clearly defined dress code, in fact, is another aspect of this subculture, starting with the fact that dancers are expected to base their own styles on expensive foreign brands).

But the fame generated by pantsula was not all positive during its early years. and it wasn’t until the beginning of the 90s until the dance really established a good reputation. That’s due in part to the fact that the first pantsula dancers were criminals, and this was considered a disreputable underworld artform, common in unlicensed dive bars non-licensed bars (not so unlike the tango, across the ocean in Argentina, actually).

But eventually, young people decided to adopt pantsula and give it a positive twist, conveying complex social themes such as the problem of violence through the dance, such as the problem violence. So spectators enjoyed the moves and the music, but it also gave them food for thought.

Nonetheless, after a boom during the 90s, the popularity of pantsula waned, but in the past several years it has been recovering, and even becoming something of a national symbol. So pantsula is back, and stronger than ever, and this time with influence now reaching across South Africa’s borders. There’s no better proof of this than seeing famous artists like Beyoncé and Skrillex, among others, who incorporate the essence of this street dance into their music videos. Now in 2017, walking like a duck has never been so cool!