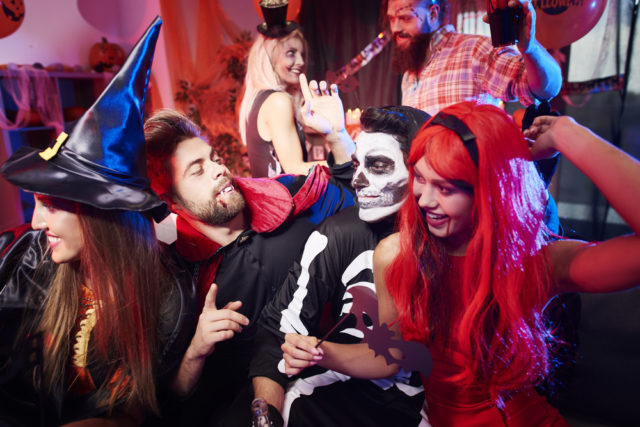 In few countries are the goings on of All Hallow’s Eve such a big deal as in the United States, with various cities large and small pulling out all the stops in their public celebrations. Yes, the kids have their door-to-door “trick or treating” for sweets, but it seems many adults have made the holiday even more their own – kind of a version of Carnival, in which costumes come on and inhibitions come off.  And visiting one of the cities on October 31 where Halloween parades, parties, and events are the biggest and most elaborate will leave you with fun memories that will stick with you for years.  Here are the 5 particularly great choices in my book:

On the USA’s southernmost island (well, unless maybe you count the U.S. Virgin Islands), the main drag (so to speak) Duval Street can be something of a circus even on the average night. But for Halloween the local characters crank it up to 11 in a saucy, outrageous, five night-blowout (often not suitable for kids) at the end of October called Fantasy Fest. It sometimes includes Halloween night (not this year, but even so, the 31st still sees a bevy of costumed characters creating cheerful mayhem across Old Town Key West.

Apart from kid-oriented neighbourhood celebrations and block parties, grownups (as well as some families with children and pets) flock to the tropical glitz of South Beach’s pedestrian shopping/dining boulevard Lincoln Road to make merry and parade about. In recent year, the merchants’ association has also upped the ante with DJ’s, stage entertainment, and pop-up bars along the way. A SoBe blast, for sure!

Like Key West noted for its sometimes ostentatious decadence, the Big Easy has long embraced Halloween as second only to Mardi Gras – yet another chance to party and be outrageous in public (though of course there’s also plenty that’s intrinsically spooky about its history and culture, too, what with the voodoo and the vampires and such). The on-street craziness is supplemented with “haunted tours” galore and special events held in various spots from voodoo shops to dance clubs (such as this year’s gay party weekend Pirate’s Revenge: The Curse of Jean Lafitte). The Krewe of Boo Halloween Parade, meanwhile, takes place the Saturday before the 31st.

The original Halloween parade blowout is still going strong in Lower Manhattan’s Greenwich Village for the 42nd year in 2016. The extravaganza of bands, floats, giant puppets, and some 50,000 costumed revelers runs up Sixth Avenue (aka Avenue of the Americas, though real New Yorkers never call it that) from Spring Street in SoHo to 16th Street in Chelsea. But there’s a scary slew of other activities throughout NYC, too, from the East Village Halloween Dog Parade to the Brooklyn Horror Film Festival to parties in dozens if not hundreds of bars and clubs across the five boroughs.

A good chunk of Greater Orlando was created to entertain visitors, and it even styles itself the “Halloween Capital” throughout the month of October. The Disney, Universal, and SeaWorld parks put together spooky yet family-friendly extravaganzas that run through much of the month, and there’s a pop-up Halloween carnival called A Petrified Forest running during October in Altamonte Springs, as well as plenty of club nights in downtown Orlando and across the region. Even the Central Florida Zoo and Botanical Gardens throws a “Zoo Boo Bash”.