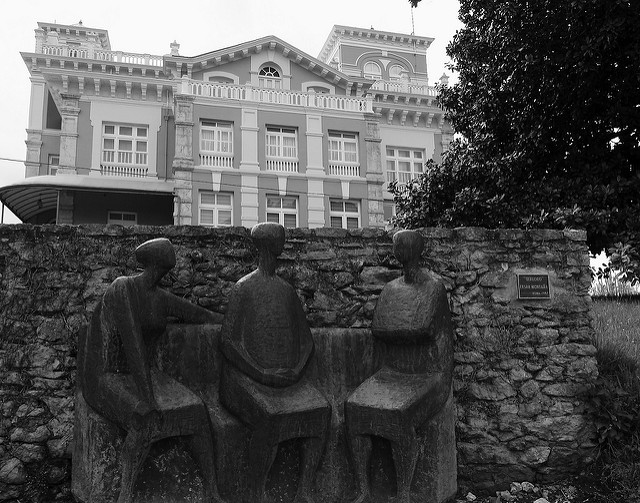 The small, fetching town of Colombres, on the coast at the northeastern corner of Spain‘s green land Asturias, is a modest place of barely 1,400 souls, set amid the verdant landscape for which Asturias is known. Perhaps its main claim to fame today is as the site of a very special museum, celebrating emigration and its impact on Asturias over generation.

Especially between Especially 1880 and 1930, poverty and conflict drove many Asturians to pack their bags and emigrate, seeking their fortunes across the Atlantic, in places like Cuba, Chile, Argentina, and Mexico.

But that wasn’t the end of the matter. Eventually, having made their fortunes, some of these emigrants decided to return to their native land, and ended up building grand manses for themselves in their hometowns. The handiwork of those returning emigrants, who came to be known as indianos (from Las Indias, which many Spaniards called the Americas), is apparent all over Asturias, and made perhaps a particular mark on Colombres, many of its streets lined with impressive casas de indianos, many restored to their original glory.

On of them, the Quinta Guadalupe, built in 1906, is now home to the privately owned Archivo de Indianos Museo de Emigración, which documents the indianos emigration and return from both sides of the Atlantic.  Furthermore, this town’s stewardship of its history and recognised in 2015 by the prestigious Princess of Asturias Foundation as the year’s “Exemplary Town”.