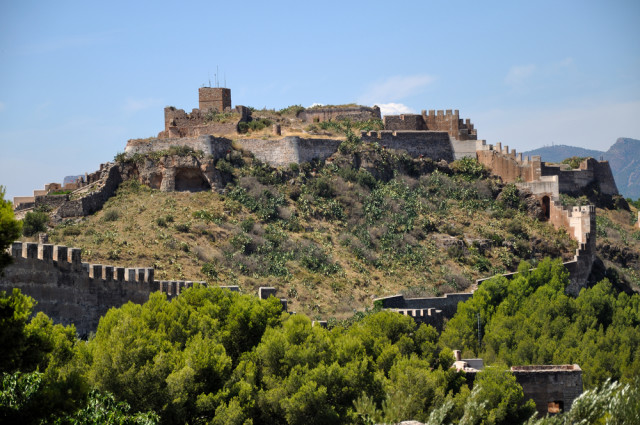 Quite a few cities and town in Spain go back a few years (and by a few years I mean millennia). But few can also claim pride of place in the foremost events of ancient history. The small Valencian city of Sagunt (Sagunto in Spanish) is one – and its location just a half hour by car or train up the coast from Valencia city makes it a perfect – and very untouristy – daytrip or overnighter especially for those who love history and ancient ruins.

Founded by the non-Indo-European people called Iberians in the 5th century BC, Sagunt started out as a walled settlement on top of a hill which at the time was called Arse (not in the English sense, obviously – try pronouncing it “AR-say”). It grew into a prosperous town which came to be known as Saguntum, which in 219 BC sided with the Romans against their nemesis, the North Africa city-state of Carthage. As a result, its legendary general Hannibal‘s army laid siege to and conquered the town.

This triggered one of Western history’s most important conflicts, the Second Punic War, and five years later it was reconquered by Rome. The legacy left by the Romans is a key element of modern Sagunt’s appeal to visitors today.  Among other things, on the hill the Romans expanded the citadel (top) – the first thing you see when approaching the city – and built a theatre for 8,000 (below), while down below a circus (stadium), as well as baths, cisterns, irrigation canals, and more.

Sagunt is a fairly small city (pop .65,000), so it’s easy to get around but a lot of walking is involved (the River Palacia is dry as a bone, so no boat cruises). History fans will love it because the local sites aren’t crowded, you can roam at your leisure in peace and quiet, and compared to other places in Spain, admissions are either gratis or very low. 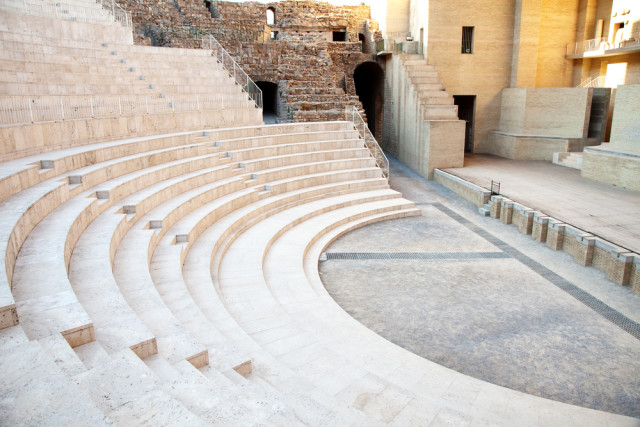 For the castle, do don sturdy shoes, a sunhat, and set aside several hours (you may also want to bring bottled water, because there’s no café or even toilets up there). The best starting point is from Plaça Major, just behind Plaça Chronista Chabert, Sagunt’s main square and the site of the very helpful tourist office. You don’t necessarily have to go up on foot; to save your strength, you can take a tourist train which leaves every 30 minutes from Plaça Major and ends at the amphitheatre (fare 1€, hilarious driver included).

Once up here, follow Carrer del Castell past the archaeology museum, the Portalet de la Sang (Blood Gate), which is the entrance to the Juderia (Jewish Quarter), and make your first stop at the Roman theatre. It was Spain’s first national historic site, but if you’re a purist, it may be a bit disappointing, as much is reconstructed and not all that much remains of the original, because some blocks were nicked to build houses and to expand the castle. But given the brilliant acoustics, city leaders decided to use it for festivals and performances, and saw fit to have it largely reconstructed with cement, whilst incorporating some of the old remains. To e the overall effect is strange, to put it mildly.

Anyhow, from the theatre, the really steep climb starts. There are several paths, but some of them were closed when I was just there – which means just climbing up as best one can. The area of the castle itself is quite plain, but you can have a look at its impressive Plaça de Armes and drink in the view for many kilometres around from its crenellated ramparts.

Back down in town, you come past the only art and souvenir shop I found in all of Sagunt, Cerámicas de Arse (see what I meant about untouristy?). If you wish, you can stop and visit the Museu Històric de Sagunt in the Judería, which displays the iconic Iberian bull and many other artifacts found during excavation. Also in the Judería, have a look at the Calvary, depicting the stations of Christ’s way to the cross. As for Moorish remnants, sadly, not a one one has yet been uncovered.

Another spot well worth visiting downtown is the Via del Pòrtic, an ancient road lined with adjacent houses and shops; it discovered when contractors went to construct a building back in YEAR TK. Today, both are here, as an example of how ancient and modern architecture have been combined successfully: the remains are beautifully displayed and preserved among black steel pillars which support the modern building on top. It’s located near Plaça Antiga Moreira, with guided tours by appointment only via the tourist office.

I stayed two days here, because I also wanted to see history of a very different kind: monuments of the recent past of Sagunt’s short lived time as a centre for steel production. To check it out, a bus runs from the train station every 30 minutes to the port. Get off at the market stop, turn right and head for Sagunt’s landmark of modern times: the Alt Forn No. 2 (above). The huge steel oven, soaring more than 60 metres (197 feet) into the sky, was closed in 1964, and folks can now visit the inside and enjoy a view over the port area, the sea and the beaches.

Speaking of beaches: bring swimwear when visiting the port area because you’ll find some of the finest and widest beaches on Spain’s entire east coast hereabouts, such as Platja Almarda, Platja Corinto, and Platja Malva-rosa.

Finally, here’s an insider tip for souvenir hunters: get hold of a miniature version of a colcho, Sagunt’s iconic handicraft, a drinking vessel for water much used by farm laborers when agriculture was still king here. Made from cork, oak, and richly embossed brass, it comes in two shapes: horizontal for males and vertical for females. Today colchos serve mainly decorative purposes and are much sought after presents for weddings and other special occasions. You can get them in several sizes at stalls at the local market.

Best fares to Valencia from the UK, from the USA.

Inka Piegsa-Quischotte is an attorney turned travel writer/photographer, currently living in Alicante, whose works has appeared at GoNomad, GoWorldTravel, EuropeupClose, and BBC Travel. Her blog GlamourGrannyTravels.com is dedicated to female baby boomers who love to travel in style and comfort.