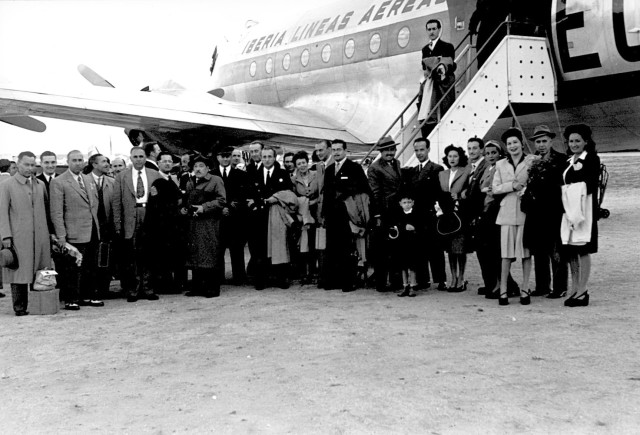 “Good afternoon, sir. Would you be so kind as to step on the scale…”

“Maintaining total weight control on a flight is very important.”

The airport employee continues smiling, expectantly. So of course I comply. 195 pounds. I have to go on a diet. Again.

“And, excuse me, but how long will the flight will be?”

Thirty-six hours? We’ll get to Argentina in less than two days? Amazing! By ship it takes a month. This new aviation technology is truly astonishing.

And there it is again, that same smile. If the flight is as pleasant, it will be the best 7,250 pesetas spent in quite some time. We’re boarding! How exciting. Of all the flights I’ve taken, none was like this – we’ll be crossing the massive Atlantic Ocean.

“Good afternoon, sir, we’re delighted to welcome you aboard. We are your air hostesses.”

“Of course, this is the first flight we’re flying. As it’s such a long flight, the thinking was that having air hostesses would make the journey more comfortable. Whatever you need, simply ask us.”

“Well, as this is all so new, there is no definite term yet. Some call us stewardesses, others air ladies. Some have even called us maids. But I myself prefer air hostess”.

“Well, we’ll see how it goes then. Although you’re certainly a pleasure to have aboard.”

“Thank you very much, sir.” 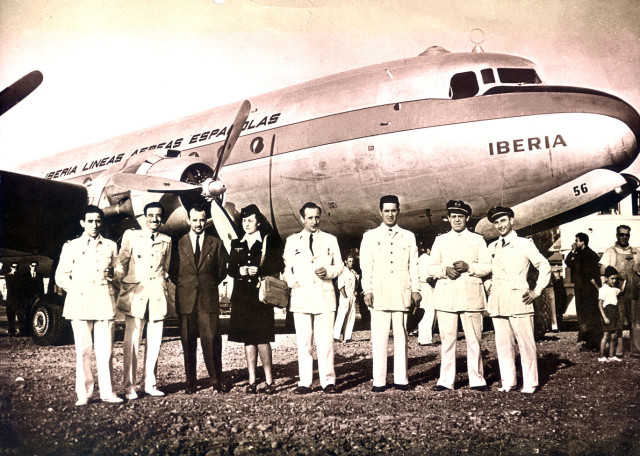 The aircraft is full. What a marvelous invention. Forty-four passengers – not even on a bus. The DC-4’s are like those used in the recently concluded Second World War – the same planes from which U.S. troops parachuted into Europe. And according to what it says here, it has a cruising speed of 227 miles per hour. Crikey! At this rate, we’ll soon have manned flights to the moon!

I fall asleep, and the next thing I know, I’m waking up in the desert. The layover in Villa Cisneros in the former Spanish Sahara is short – just enough to refuel, resupply, and do engine checks. It’s strange to think that in crossing westward we’ll only spend one night, while the return will end up taking two nights, even though the flight time is the same. So on the way back we’ll spend that second night in Villa Cisneros. Good thing they planned ahead by building a hotel right in the middle of the Sahara for us to rest; the effect of the time difference on the return trip must be frightful. I’m sure there’s some American doctor trying to come up with a term for this temporal dislocation at this very moment. But now’s not the time to think about the return – it’s time to begin our grand crossing of the Atlantic! Flight 1215 to Buenos Aires!

Flying over the vast Atlantic Ocean at night means that you don’t really see much of anything out the window. Darkness, deep and profound. It could be the Atlantic or it could be the Mediterranean. But soon dawn comes, and the landscape below comes into view. We fly into Montevideo, Uruguay, our last layover, and then it’s a very short hop to Buenos Aires, where I’ll finally get to see my grandparents after so many years. No grandparent should ever go without meeting a grandchild, now all grown up with a career and a family. And now that the air hostess has assured me that flight 1215 will be operated every ten days, there are no excuses.

Thirty-six hours later, and with a strong yearning to stretch my legs, I can now easily claim to have flown farther than any other European. From Madrid to Buenos Aires on the very first commercial transatlantic flight — B.A., here I am!