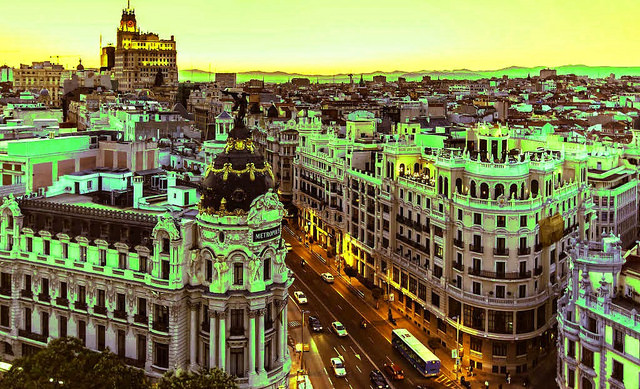 Quite a few locals in Spain”s capital head for the hills and beaches in July and August, but far from everyone. And for remaining locals as well as visitors, one of the delights of the summer is spending time at downtown’s many terrace bars and cafés. Some are ground level, others up on the rooftop. All are cool spots for some refreshment for all your senses. A refreshing Madrid summertime must, in short! Here are eight of the most outstanding terraces of the moment:

Right astride Madrid’s main drag, Gran Vía (top), the chic Hotel Iberostar Las Letras Gran Vía is set in an early-20th-century building whose charming rooftop space serves up tasty treats both liquid and solid along with stupendous views of the iconic Belle-Époque Telefónica building. This scene never gets old…

“The Burning House” a 14-year-old cultural centre in the funky Lavapiés neighbourhood with a cool café for drinks, snacks, and other fare.  But here another bonus, in keeping with the cultural centre thing, is entertainment including a summer cinema series and (especially Sundays) alternative music performances. Encore, please!

Just south of the Plaza Mayor,  a stylish hostel is home to a trendy indoor/outdoor café with a lively atmosphere, great wine/beer/tapas list, and impressive views of downtown landmarks like the dome of the Baroque St. Isidro Church (until not long ago Madrid’s Catholic cathedral). Trendy enough, in fact, that there’s often a line to get in. Worth it.

Organised around the rooftop pool of the Hotel Óscar Room Mate in the trendy Chueca neighbourhood, La Terraza de Óscar delivers 360-degree views across downtown, along with its cutting-edge vibe and extensive, creative cocktail list. Drop onto one of its Balinese beds and soak up some Madrid chic, day or night.

One thoroughfare especially known for its outdoor cafés, at intervals along its green space, is the Salamanca neighbourhood’s broad Paseo de Recoletos, where the woody-mod outdoor space at Otto is a favourite, whether for a cup of coffee, a full gourmet meal by chef Francisco Javier Zamora, or drinks late into the night. Great people-watching!

Another Gran Vía favourite, along with its refreshment and a chill-out soundtrack, this hotel’s seventh-floor rooftop terrace proffers impressive views indeed of the bustling avenue below while itself being an classy oasis of tranquillity. If you’re peckish, there’s also a sophisticated fusion menu. Delish!

Formerly The Penthouse, the exclusive rooftop terrace of the Hotel ME Madrid Reina Victoria on nightlife stalwart Plaza de Santa Ana is another antique-meets-mod, see-and-be-scene classic packed with beautiful people serving beautiful (and not infrequently a few famous) people.