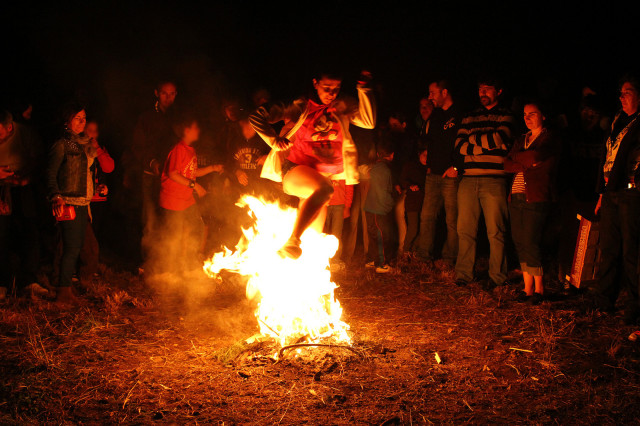 Observed especially in many of the world’s Catholic countries, the feast day of the Christian New Testament‘s St. John the Baptist is tomorrow, June 24th. But it’s today, St. John’s Eve, that folks in Latin America and Europe (and most especially Spain) make a big deal of, with celebrations, rituals, and superstitions that hark back to ancestral – even pre-Christian – times. Oh, and fire. Lots of fire.

Such traditions come into play on the Noche de San Juan because it correlates and often coincides with Midsummer, aka the June solstice – which was celebrated by Celts, Ango-Saxons, and other pre-Christians back to at least the ancient Romans, to mark the end of spring and the arrival of summer.

The night of June 23rd in Spain is celebrated with particular style and enthusiasm – revolving around hundreds of bonfires on beaches across the country, set to help participants rid themselves of evil spririts, as well as big, colourful street festivals in some big cities.

This celebration has always seemed to imbue the places where it’s held with a positive energy (even, some might say, a kind of mystical halo), especially noticeable in the country’s coastal communities. Ancient beliefs were blended with newer religious impulses to result in one of the most deep-seated customs in Spain.

After sundown, groups of friends generally head for the nearest beach, bringing food and drink to pass a convivial evening swapping stories and trying to rid themselves of the bad memories of the previous years. Several interesting rituales form part of this process:

Then, too, many are the Spanish towns and cities which pull out all the stops to celebrate – each with its own particular twist. In Málaga, for example, Malagueños commonly take advantage of St. John’s Eve bonfires and barbecues to grill and share with each other a typical local favourite, espetos de sardinas (sardine skewers).

Up in Galicia, this night is unthinkable without a queimada next to the ocean – a schnapps-based libation which is set on fire and comes with a dose of mysticism and even a dab of conjuring.

In Catalonia, where the relatively recent (1955) but already beloved tradition of lighting the Canigó Flame from the eponymous iconic mountain of the Pyrenees in various cities, including Barcelona – arriving at the Old Town’s Plaça Sant Jaume before continuing on the ignite bonfires in various neighbourhoods of the city.

Perhaps the best known celebration of all is the Fogueres de Sant Joan in the coastal city of Alicante, which ever since 1928 what’s set aflame have been huge, colourful, sometimes satirical and usually whimsical figures inspired by the falles celebration of Valencia.

But wherever you go in Spain to celebrate St. John’s Night, it’s a hunka hunka burning fun!