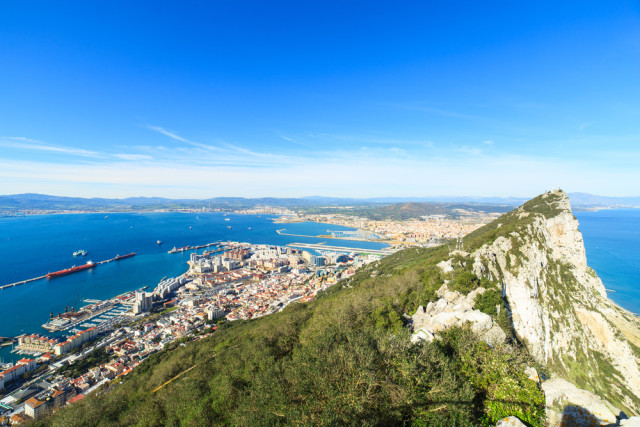 One of Europe’s quirkier enclaves – as well as its last remaining colony – is a singular bit of business stuck down at the foot of Andalusia. And if you happen to be in the neighbourhood – especially the Costa del Sol, many of whose main resort areas lie within a drive of and hour to 90 minutes – Gibraltar‘s unusual mix of history, sociology, and nature is well worth a day trip or even overnighter.

An elongated cone just 6.7 square kilometres (2½ sq. miles) in size, “the Rock” (also locally dubbed Gib) has been part of the United Kingdom since 1704, thanks to its capture during the many intra-European wars back in the day – specifically, in this case as a kind of almost accidental result of the War of the Spanish Succession.

And for visitors, the quirks begin the moment you cross the border from the Cádiz city of La Línea de la Concepción – because to actually get into the colony, you have to first cross its airport runway, whether on foot or by vehicle (naturally, when planes are landing or taking off, you have to wait). On this last trip, my party parked over in La Línea, then walked 15 minutes to the border facilities, where even before the runway crossing there was a desk to sign up for a van tour of the upper Rock, which for first-timers I would highly recommend (the cheaper alternative is to take the cable car up/back, but that is much more troublesome and time-consuming).

On my party’s tour, about two hours long, we were treated to the highlights, trundling up the narrow roads first the Rock’s southernmost tip, Europa Point, to ogle the view out over the Strait of Gibraltar toward Morocco, 14.3 km (nine mi.) away. Next stop was St. Michael’s Cave, a portion of a limestone cavern network that’s been developed and rigged up with groovy coloured lights (would I love to attend a concert down here!). 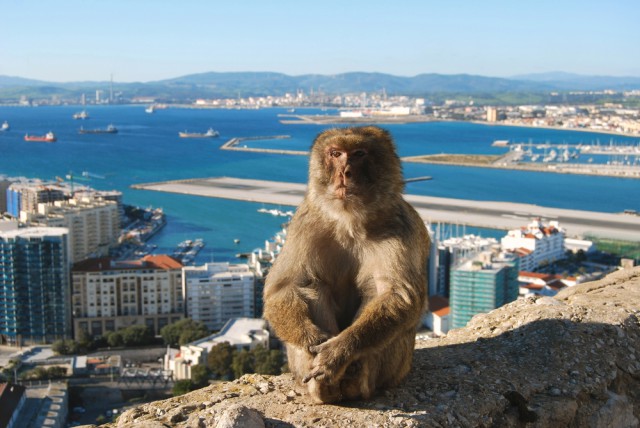 Another set of caves that’s a must is man-made, and key to Gibraltar’s history. The Great Siege Tunnels were carved out of the Rock by British defenders beginning in 1782 to protect against attempts by Spain to retake Gib, and greatly enlarges during World War II. We traipsed down just a few hundred feet of the 52 km (33 miles) of current tunnels but got an excellent taste – including a look at original cannons, and mannequins recreating historical defenses here through the centuries. A bit farther down, you can also visit the partly ruined Moorish Castle, built in the 11th century and as recently as 2010 still used as the colony’s prison.

The highlight for many if not most visitors, however, is the stretch of road across the Rock where there’s a feeding/bathing station and hangouts for the colony’s famous Barbary macaques (above). Some 300 of them roam the higher elevations here, and especially cluster around the so-called Apes’ Den, with a feeding station and pool, among other facilities put in since my last visit some years ago. In addition to this, the Brits went through some effort to keep their once dwindling numbers up – importing more from Morocco at one point, for example – because they’re such a symbol of the colony (in fact, tradition has it that British rule over the Rock will endure as long as these monkeys do).  You can go right up to the buggers – they’re said to be cheeky and even like to nick stuff from visitors, but this time none climbed on my shoulder (in fact, they even seemed rather bored with us).

Then it’s time to head down to the flats, where most of the locals live – some 30,000 strong these days, they’re a multi-ethnic mix mostly based on Andalusian stock, speaking English, Spanish, and the local patois, a hybrid of the two called Llanito. It certainly feels different from surrounding Spain – for example, pubs and fish and chips instead of tapas bars, Marks and Spencer department store instead of El Corte Inglés. The main street is called, well, Main Street (below), and is lined with all manner of shops and eateries, ending in Grand Casemates Square. 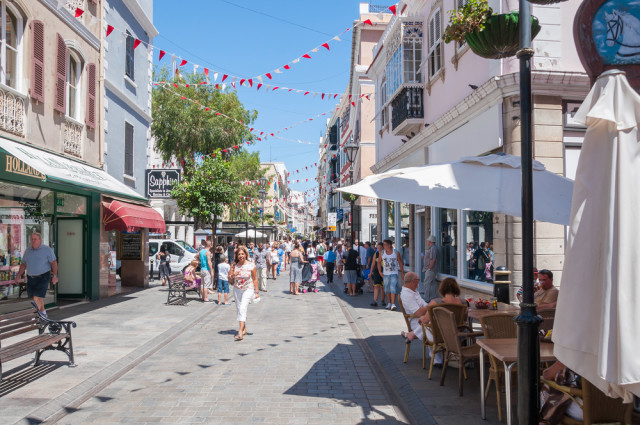 Here and on other neighbouring streets you’ll find the occasional attraction worth popping into: churches such as the Holy Trinity and St. Mary the Crowned; the Gibraltar Museum; and the National Art Gallery showcasing local artists.

One final note: if you’re coming just for the day from Spain, aim to make it as early as possible – take a Rock tour in the morning, finish up in time for lunch (locals and I highly recommend Roy’s Restaurant in Grand Casemates Square), then wander the town for some of the afternoon before heading out. You want to avoid having to cross back into Spain during the end-of-the-afternoon rush, both because of the many Spanish workers heading back home for the day and because every so often the normally instantaneous, no-hassle border crossing gets massively slowed, resulting in waits up to three hours.

Wait or not, though, you’ll definitely like the cut of this Gib!