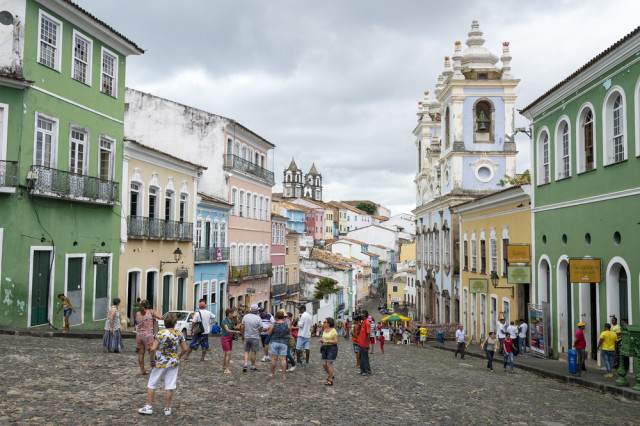 To truly understand Brazil, it seems to me, you of course should visit Rio de Janeiro, but you also really must come to this city of 3 million (metro area 4 million) up on the coast of the country’s northeastern state of Bahia. Founded in 1549 as the first capital of Portugal’s new colony, Salvador is one of the Americas’ oldest still-existing cities, and this city and state have essentially been the crucible of Brazilian culture and identity.

Today, as the country’s third largest urb, Salvador still attracts no shortage of visitors looking for a glimpse of the soul of Brazil. (More than a million and a half of them join the million locals celebrating the blowout Carnaval every winter – in 2017, February 23-March 1 – but to really explore this city comfortably, my advice is to avoid the crowds.)

They find it especially in the city’s colonial quarter, Pelourinho (top) its very name derived from the main square’s whipping post for slaves. Built atop a cliff which divides the Cidade Alta (Upper City) from the Cidade Baixa (Lower City), UNESCO World Heritage Site is an incredibly atmospheric quarter of hilly cobblestone streets and pastel-hued Baroque architecture, brought back from delapidation since the 1990s, and now inevitably somewhat touristy feeling to a degree, but also very much showing evidence of authentic local life. 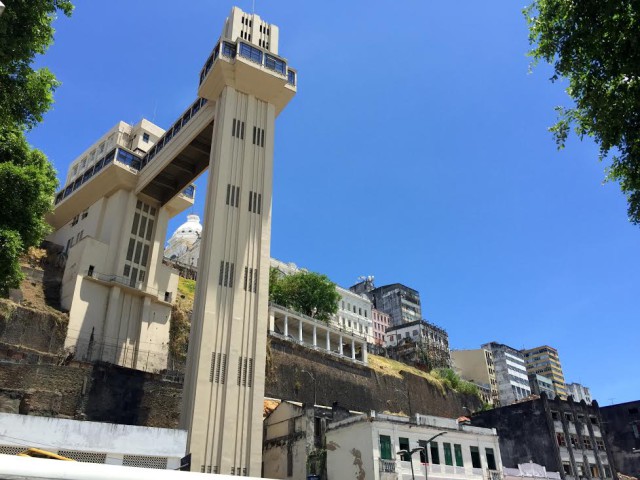 Highlights include the 17th-century cathedral, with a fairly sobre sandstone façade but a blinged-out interior, with ceiling and chapels generously gilded; however, the nearby church and convent of São Francisco, whose interior may be the most shamelessly gilded I’ve ever seen (especially keeping in mind St. Francis is supposedly the saint of the humble and poor). Of Pelourinho’s 21 churches, there’s a third particularly worth mentioning because Nossa Senhora do Rosário dos Pretos (Our Lady of the Rosary of the Blacks, top right) has a special place in the hearts of the locals, because in the early days slaves were banned from white churches; here devotional statues and images have African features, and the masses – one of which I was privileged to attend – Afro-Brazilian music and rhythms.

On the secular side it’s worth checking out the Casa Jorge Amado, a colonial manse showcasing one of Brazil’s foremost literary figures (1912-2001), born in Bahia and a longtime resident of Salvador (I’ll never forget the first Brazilian movie I ever saw, based on Jorge Amado’s novel Dona Flor and Her Two Husbands). The Museu da Cidade is across the street, an eclectic look at the history and culture of the city, and next to the cathedral are another great pair. The Archaeology and Ethnology Museum does a fine job of introducing visitors to civilisation in the region dating back to pre-Columbian times. But what I found especially riveting lay upstairs: the Afro-Brazilian Museum is a trove of the unique syncretic culture created by those long-ago slaves, especially Candomblé (essentially their traditional African religion with a protective overlay of Christianity) and capoeira, the martial-arts-dance hybrid developed by slaves and now seeing a renaissance both for reasons of cultural pride and the fact that it’s become a tourist draw. 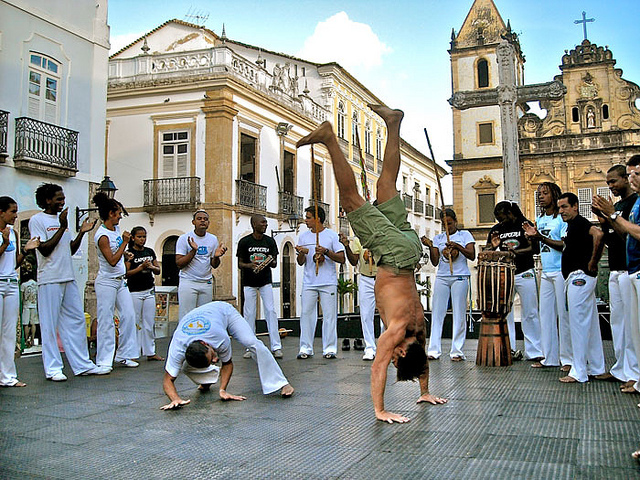 Beyond the museum, capoeira in particular can be seen in various forms (and degrees of quality) throughout the city. Descending the cliff from Pelourinho via the iconic Lacerda Elevator (above) will take you to the Mercado Modelo, an enormous covered market devoted mostly to handicrafts, and often at its entrance a capoeira troupe will be doing its thing for tips. Same goes on some Pelourinho streets and squares; or you can seek out as I did one of the capoeira schools (many of which offer sessions for gringo newbies). I found my way one night to the basement studio of Filhos de Bimba at Rua Gregório de Matos 51, and sat nearly hypnotised as three young guys were rigorously put through their paces by an older trainer. Mestre (Master) Bimba was the greatest figure in 20th-century capoeira, and another school is named after him, the Associaçião de Capoeira Mestre Bimba; others (spread throughout Salvador, not just Pelourinho) include the Escola de Capoeira Angola de Bahia and the Acadêmia João Pequeno de Pastinha C.E.C.A.

Candomblé – Brazil’s answer to Haiti‘s Voudon and Santería in Cuba – is a rather harder nut to crack. Many folkloric shows incorporate elements of its rituals, costumes, music, and dances, but this is a bona fide religion, not a tourist show, and worship is held not at scheduled times, and often in rough neighbourhoods. Nonetheless, a number of practitioners do welcome visitors (just like, for example, black gospel churches in New York City), and resources for locating services include hotel concierges and Pelourinho’s Federação Nacional de Culto Afro-Brasileiro (Rua Portas do Carmo 39).

I’d also highly recommend sampling the distinctive (and not necessarily light) Bahian cuisine, which is heavy on palm oil, seafood, coconut milk, okra, black-eyed peas, chili peppers, and did I mention palm oil? One of my two favourite venues in Pelourinho is the Restaurante Senac on Largo do Pelourinho; this branch of Brazil’s national culinary academy runs an elegant, colonially-appointed dining room that lays out a high-quality and absolutely scrumptious Bahia buffet at very affordable prices. I also loved the nouvel take on Bahian fare up the street at Pelô Bistrô, the restaurant at the lovely ten-room boutique hotel Casa do Amarelindo. 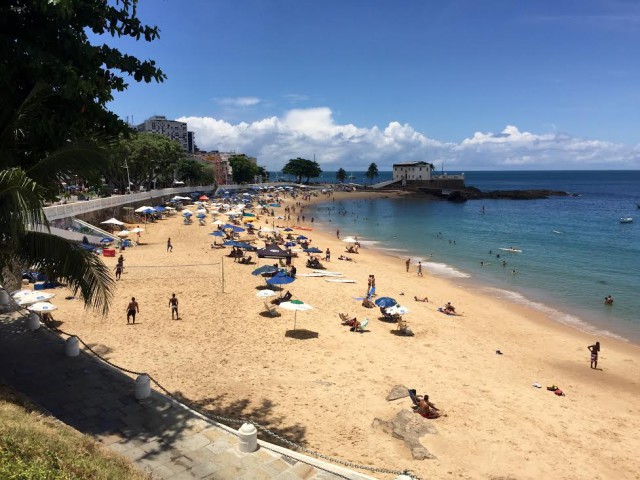 Speaking of hotels, there are quite quite a few accommodations in Pelourinho at all price points – or you can opt for a numerous lodgings elsewhere in Salvador, because other areas of the city have quite a bit to offer, as well. My own choice was the impeccable Sheraton da Bahia, not just because of its good food and full panoply of services, but a convenient location midway between Pelourinho and Porto da Barra, the lovely beach at city’s southwestern tip (actually, there are 80 km/48 miles of good to fabulous beaches running up the coast from Salvador, but for the views, the sands, and the sea, the beaches right here in Barra were the ones that most won my heart; alongside is a small colonial fort now housing an interesting nautical museum). 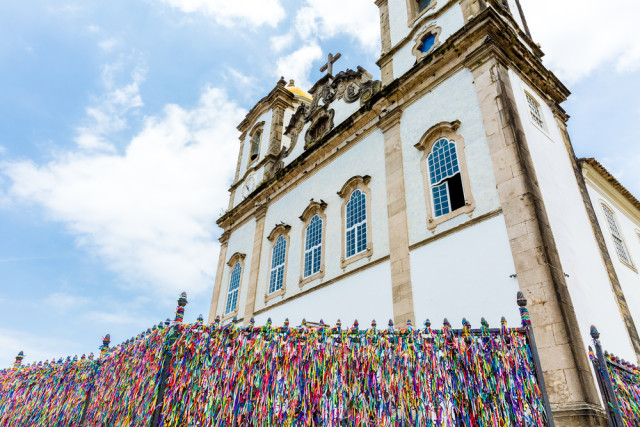 Another landmark you should try not to miss is the 18th-century Baroque Nosso Senhor do Bonfim (above) up in the Itapagipe district – the Salvador church most beloved of the local faithful – both pure Catholics and Candomblé devotees, who associated Our Lord of Bonfim with their overarching deity Oxalá. Note the side hall filled with ex-votos and other offerings in hopes of and/or thanks for miraculous cures, as well as the fence outside, covered with coloured ribbons called fitas, are said to grant wishes and come in colours associated with different orixas, Candomblé deities.

There’s plenty more, and I’ll be returning to Salvador in future posts, but in the meantime, for more information, start with Brazil tourism‘s site VisitBrasil.com.

Best Iberia fares to Salvador from the U.K., from Spain.