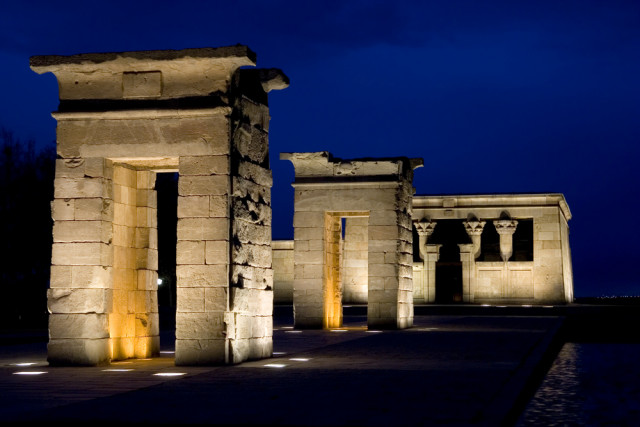 During my first visit to Madrid back in 1978, strolling out near my family’s hotel near Plaza de España, I was gobsmacked to suddenly spy, of all things, an ancient Egyptian temple – right on downtown Calle Ferraz, on a platform in a reflecting pool of a park near the Oriente Royal Palace, called Parque del Oeste.

The Temple of Debod is a small structure (just 12 by 15 metres/39 by 49 feet) with three chunky stone gateways leading up to it, dating back to the 2nd century BC, dedicated to Isis (the Egyptian goddess, not the terrorist “caliphate”) as well as the king of the ancient Egyptian gods, Amon-Ra.

So how in the name of Anubis and Osiris, you wonder, did it end up in Spain? Therein lies a wee bit of a tale.

Picture it: 1964. The Egyptian military régime of Abdel Nasser was in the midst of the country’s greatest engineering project of modern times: the Aswan High Dam, way down in the south of the country, meant to control flooding on the Nile and provide water for irrigation and hydroelectric power. Big problem: the resulting Lake Nasser would swallow up not only some villages but enormously important sites from Egypt’s deep past, particularly the pair of massive stone temples at Abu Simbel in Nubia, built around 1257 B.C. to glorify Pharoah Ramses II. So a save-the-Nubian-monuments campaign was launched to raise the tens of millions it would cost to move and save many the lower Nile Valley’s key archaeological treasures.

In Spain, still in the grip of the Franco dictatorship, the press and public followed this saga with great interest – and as it turned out, the régime took a leading role in financing the relocation effort. In gratitude, the Nasser régime donate another, much smaller temple that had also been dismantled. The Temple of Debod was gifted to Spain in gratitude for its own régime’s role in the rescue effort as well as that of Spanish archaeologists on the UNESCO team, and reconstructed in Madrid in 1972.

The structure is fairly simple, actually. Four columns flank its entrance, then in the several interior chambres (some pretty claustrophobic, I must say) there are several altars, along with carved reliefs of various religious iconography, and a second storey laying out the temple’s history, including photos, models, and multimedia displays.

Other temples which were gifted to foreign countries under similar circumstances, by the way, include the Temple of Dendur (which I also love, exhibited in New York City’s Metropolitan Museum of Art) and the Temple of Taffeh (on display in the Rijksmuseum van Oudheden in Leiden, Netherlands).

Yes, the Templo de Debod is a fascinating albeit admittedly somewhat obscure anecdote in the history of 20th-century Spain, Egypt, and archaeology. But it’s also a marvelously tranquil corner of Madrid away from the urban bustle and one with a particularly exotic flavour and tale to tell.