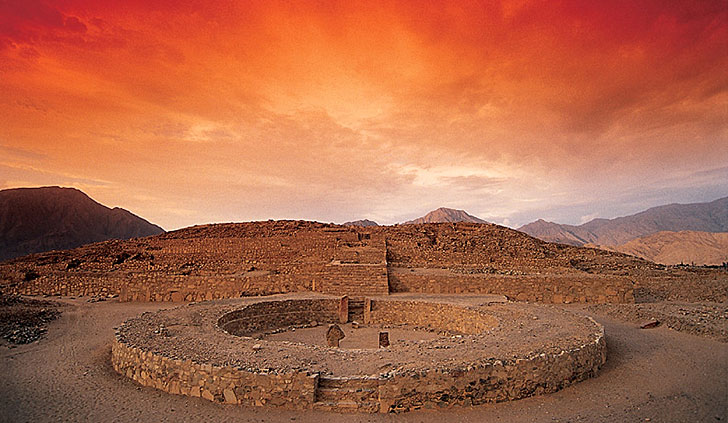 When it comes to the pre-Columbian past of Peru, most of us automatically and understandably think of the Incas. But there were many other cultures and civilisations in these lands, some of them much older than the Incas. Several of these originate in what is now desert regions up and down the country’s coast north and south of present-day capital Lima. One example you’ve heard about is the Nazca people, because of their now famous artifacts, the Nazca Lines. But you likely have not heard of is the Western Hemisphere’s oldest known city and civilisation.

A remarkable complex called Caral, located In the Supe Valley, just 120 miles (200 kilometers) north of Lima, and 30 kilometres (19 miles) inland, is the greatest of 20 remnants of the oldest known civilization in the Americas, a 607-hectare (150-acre) UNESCO World Heritage Site consisting of temple mounds, sunken plazas and the remnants of spectacular stone structures on an arid plateau.

First uncovered in 1948, its true import wasn’t discovered till 1994, several years later it was carbon-dated back to 5,000 years ago – around the time of ancient Egypt, and far earlier than any previous known civilisation in the Americas (up till then, the Olmecs of Mesoamerica).

Given its great age, the site is of course more worn-looking than, say, Machu Picchu, which dates back to just the 15th century AD. But still, there are some impressive structures left. The centrepiece is its main stepped pyramid, Peru’s largest, 18 metres (60 ft) tall and covering an area nearly the size of four football fields. There are five others, along with two sunken plazas, and a pair of residential districts (one more elaborate for higher-status residents, the other more likely for commoners). A nearby visitors center presents helpful exhibits to provide background and context.

Caral can be visited in a day trip from Lima (you can hire a car yourself or take an excursion from tour operators such as Caral Tours), but in order to get the most out of it, I recommend an overnight. As far as nearby towns that might be overnighting candidates, Huacho, Barranca, and Végueta (also the site of a museum with Caral artifacts) are among the nearest options.