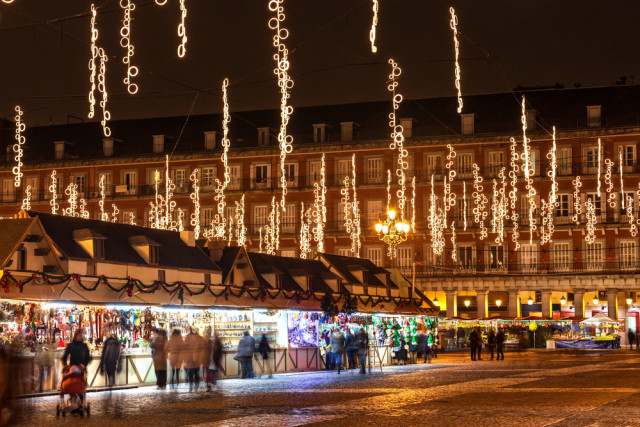 Europe’s cities especially pour on the charm during the Yuletide season, and Spain’s capital is no exception. Here are the top holiday highlights to watch out for!

Starting at the end of November, the bright-luces-big-ciudad thing gets an extra festive layer throughout much of Madrid, but of course especially downtown – along Gran Vía, Paseo de la Castellana, Puerta del Sol, Plaza Mayor, and so on. What’s more, some of these shiny bits are designed by some of the shiniest names from Spain’s creative and design world, such as fashion designers Purificación García, Hannibal Laguna, and Ángel Schlesser, as well as architect Sergio Sebastián.

Also starting at the end of November, downtown’s stately Habsburg-era Plaza Mayor makes an impressive backdrop for Madrid’s Mercadillo Navideño (top), comprised of around a hundred stands with crèches and decorations as well as handicrafts and special holiday treats like turrón (nougat). Various other smaller markets can be found in other hubs like Plaza de Callao, Plaza de España, Plaza de Moncloa, and elsewhere.

This one already happened this year, but check back for the 2016 date of the 5th Carrera de Papa Noel, sponsored by the department store chain El Corte Inglés, when on a December Saturday hundreds of runners will dress up as Old Saint Nick and run a 5.5K along the broad boulevard Paseo de la Castellana (while trying to break the Guinness World Record for Santas running together, of course); proceeds go to the city’s muscular distrophy foundation. Fun to watch or participate, so on your mark…get set…ho, ho, ho! 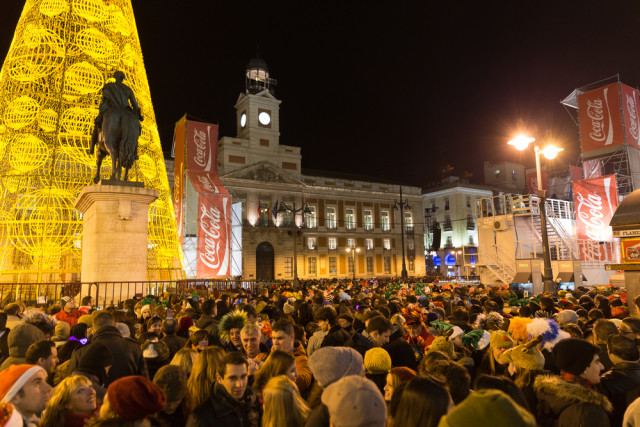 Apart from the new Santa race, the most iconic public events of the season take place on Nochevieja December 31, which kicks off with another road race, the 10K San Silvestre Vallecana, which marks its 51st running this year. The real main event, though, naturally follows that night, when Madrileños gather in downtown’s epicentre, the Puerta del Sol plaza (above), to drink, make merry, and wait for the stroke of midnight from the Royal Post Office clock. Then, for each of those twelve chimes at midnight, everyone swallows one of the dozen grapes they’ve toted along, in a tradition dating back to the 19th century.

On the other side of the new year, one more holiday tradition awaits, because as the song goes, there are 12 days of Christmas, right? And on the 12th day, my true love gave to me…three kings a-gifting! That would be the Reyes Magos, aka the Magi, aka the Three Wise Men Balthasar, Caspar, and Melchior, who famously showed up in the Bible with gifts for baby Jesus and now in Spain and many other Latin countries make the rounds on January 6th (which is also the Catholic day of the Epiphany) with sweets and presents for children (the way kids in other countries get Christmas gifts from Santa). In public, the night of Jan. 5 is given over in many Spanish cities to the cabalgata, a parade starring the Reyes – and Madrid’s version is Spain’s biggest and most elaborate, televised across the country. It begins at Plaza San Juan de la Cruz (Nuevos Ministerios) at 6:30 pm and ends two hours and 15 minutes later at Plaza de la Cibeles with sweets, speeches, and fireworks.

Best Iberia fares to Madrid from the U.K.,  from the USA.