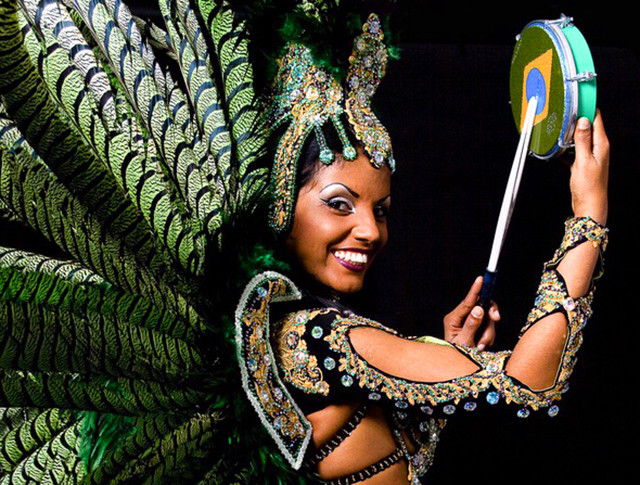 There is nothing quite like the massive Carnaval in Rio de Janeiro – the over-the-top extravagance; hundreds of thousands of raucous Brazilians thronging the streets and the Sambodrome; and of course the joyously deafening samba music and dancing that helps give shape to it all. Not all of us can be so fortunate to be flying down to Rio that week in February (in 2016, Feb. 5-9) – or willing to brave the mob scenes and jacked up prices that go along with it.

But guess what? anyone can get a terrific taste of the experience by attending the loud, high-energy ensaios (rehearsals) held weekly usually beginning summer at the headquarters of the 26 samba schools, the neighbourhood-based associations/social clubs which since the 1920s have been the heart and soul of this massive annual blowout’s signature samba parade. Which you choose depends on various factors – Mangueira and Portela are the most historic, founded in the 1920s, while São Clemente is one of the most convenient for most visitors, located in Centro (downtown Rio); and others have different characteristics that you might find particularly attractive (get more detailed descriptions here); others tend to be located in somewhat dicey neighbourhoods. 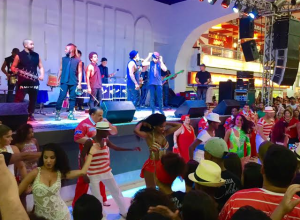 On a recent return to Rio, I decided to join some local friends on a Saturday night at the second of the samba school rehearsals I’ve attended, and it turned out to be a highlight of my visit. The school was Salgueiro, founded in 1953 and currently enjoying a rep as one of the most “glamorous” and celebrity-popular samba schools, as well as one that tends to most celebrate Brazil’s African heritage. It’s located in the fairly secure Tijuca neighbourhood, but a bit of a cab ride from where most of the hotels are in Copacabana, Ipanema, and Leblon (from mine, Leblon’s Sheraton Grand Rio, 30 minutes/60 reais).

Heading through the gigantic, far from subtle façade emblazoned in the school’s colours, red and white, we paid a 30-real admission fee (at the time about £5.25/US$8/7.35 euros), then emerged into an enormous rectangular hall with a soaring, red-and-white-checkerboard ceiling and already crowded with folks standing in front of a stage, tables on either side of them, and ringed by various vendors of beer and booze, as well as some snacks. 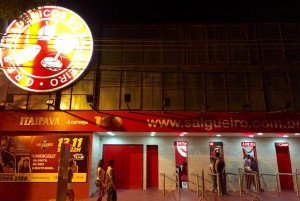 Almost everyone was movin’, groovin’ and sometimes singin’ along to a group of insanely energetic young guys on stage, drumming and belting out a repertoire of current pop songs. Then around 1 am, the main event: presenting some of what Salgueiro would be parading in the Sambodrome in February, including baianas (lithe young women in skimpy costumes), as well as pimps and other characters from the school’s theme for 2016, A Ópera dos Malandros, a popular musical by one of the giants of Brazilian music, Chico Buarque, and inspired by the Threepenny Opera (remember Mack the Knife?”).

From a platform up above behind us, it was then the turn of the Bateria Furiosa (“Furious Battery”),  a rhythm section that under the direction of Mestre (Master) Marcão shook, rattled and hummed skillfully and – OMG yes, furiously indeed. Finally, another group of performers took the stage to roll out the night’s pièce de résistance: Salgueiro’s samba song for 2016 (which the crowd could follow thanks to copies of the lyrics handed out; also check out school’s official video of the song at the bottom):

Ah, I am a son of fortune
The winds blow in my favour
Fortune turns, the world turns, scoundrels make them turn
I’m the one who deals the cards, so place your bets!

Below, check out the 11 main samba schools whose rehearsals/samba nights in the months leading up to Carnaval are open to the public. And do come on down and get into the samba spirit –the spectacular floats and other bells and whistles may be absent, but the skill and sheer joy are still amazing to witness and be a part of. And Iberia can get you there, with flights from the U.K. as well as elsewhere via Madrid.