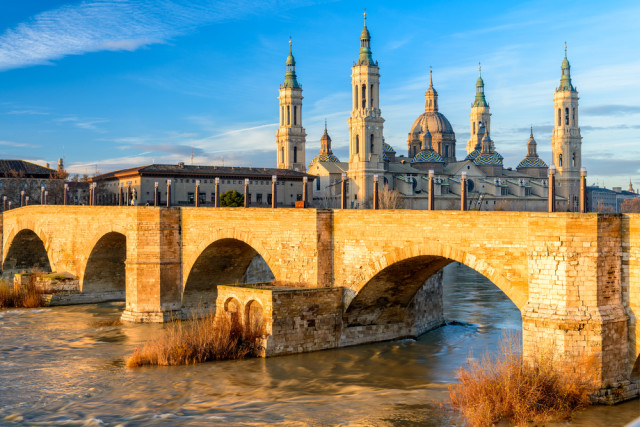 The historic capital and largest city of the Aragon region of northeast Spain, this elegant city of just over 700,000 is a fascinating (and fun!) destination for anyone interested in deepening their knowledge of this country’s many cultures, stretching back more than 2,000 years. And did I mention it’s also a mighty fun time?

Astride the Ebro River, Zaragoza (pronounced “tha-ra-go-tha” in Castillian Spanish, and historically known as Saragossa in English) traces its roots to an ancient Iberian tribal village which in the 1st century BC became the site of the Roman Empire city of Caesaraugusta. That became Saraqusta under Moorish rule of the early 8th to early 12th century (and of course you can see how the modern name derives from that). 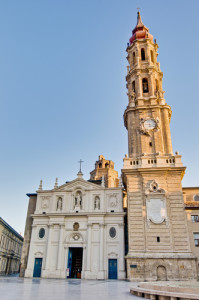 Today, Zaragoza is a delightfully dynamic city thanks to the presence of among other things various industries and a vibrant university. And for the visitor, it also offers some tremendous history, atmosphere, and great eating (perhaps that’s why the study-abroad program I attended years ago chose Zaragoza out of all the cities in Spain for its new home base, as use of the Catalan language regained popularity in Barcelona). As in many other Spanish cities, much of the best sightseeing is to be found in the casco antiguo, the old, once wall-enclosed city centre, and the main landmarks to start with are a pair of majestic Catholic churches. La Seo (left) is the city’s cathedral, which since it took some five centuries to complete comprises various styles such as Romanesque, Gothic, Baroque, and Mudéjar (the Moorish-influenced vernacular used by converted Muslim artisans after the Christian reconquest of Spain from the Moors); it’s also noted for a museum of beautiful French and Flemish tapestries. 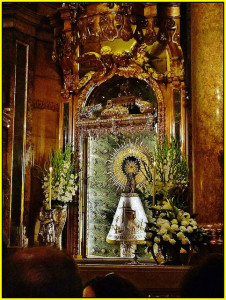 Right nearby, the even more grandiose Basilica of Our Lady of the Pillar (Nuestra Señora del Pilar, top) was built a bit later, between 1681 and 1872, to commemorate a legendary apparition of the Virgin Mary standing on a pillar (right; Pilar also became a popular female given name in centuries to follow). Top draws here include a superb alabaster altarpiece; a Goya painting of Mary; and of course her icon and supposed pillar she left behind, subject of adoration by the faithful. October’s nine-day Fiestas del Pilar are one of the biggest deals of the year here in Zaragoza (and in Spain in general), spreading beyond religious processions and other observances to become one big party. Topping the list of other must-see landmarks is the 11-century Aljafería Palace, Spain’s most impressive Islamic building outside Andalusia, with alterations and an entire palace annex added after the Reconquest; today it’s where the parliament of the Aragon Autonomous Community meets, and tours are given to the public.

Going back even further in time, the remnants of the ancient Roman city have been uncovered, with sites open to the public such as the 6,000-seat theatre, the Teatro Romano; the nearby Termas Públicas (public baths); the Museo del Puerto Fluvial (remants/relics of the old Roman river docks and port area); and right alongside the basilica and La Seo, the Museo del Foro de Caesaraugusta, where you can see some shops, porticoes, artifacts, and even a chunk of the ancient sewer system.

Take a breath, we’re not done yet with the historic sites, a notable example being La Lonja, the 16th-century Renaissance trading exchange, now an exhibition hall.  The churches most worth a look include San Pablo, Santa María Magdalena, and San Miguel (all built in the 14th century, and the first three with towers believed to be 11th-century mosque minarets) as well as San Ildefonso and the Fecetas Monastery (Baroque with 17th-century Mudéjar ceilings).

Don’t forget, too, as you stroll the casco antiguo and beyond, you’ll come across a number of grand palazzos (mainly 16th century), two of which are now museums: the Museo Ibercaja Camón Aznar (especially strong in Spanish masters including a superb Goya collection) and the Museo de Pablo Gargallo (an early-20th-century avant-garde sculptor who worked in Barcelona and Paris).

Speaking of museums, don’t miss the Museo de Zaragoza (fine arts and city history), the Centro de Historia de Zaragoza (another great history display behind the neoclassical façade of a onetime monastery). The newest in town, meanwhile, is an Origami Museum. You can get admission to many of the above – as well well as get free transportation, guide services, and discounts in various local establishments – with the Zaragoza Card available from the local tourism authority.

Whew – and I haven’t even gotten to cover the dining and nightlife. That’s for a future post! 😉