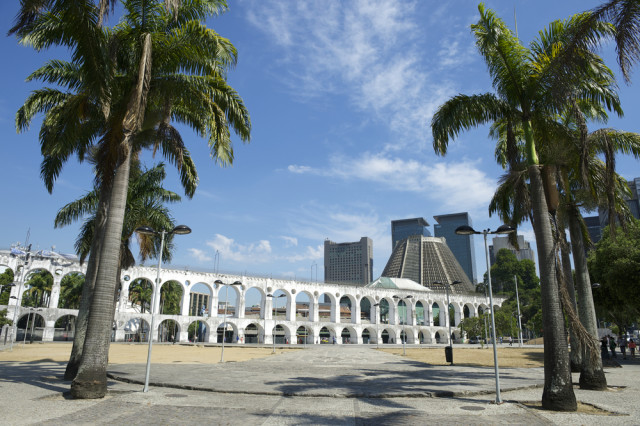 Central Rio de Janeiro is most famous for the likes of Ipanema and Copacabana. But in many ways its most exciting and dynamic scene – along with a plethora of cultural and historic landmarks – is to be found north of them, in the venerable district known as Lapa, adjoining Centro (downtown).

Not long ago considered a bit dodgy due to street crime and delapidation, Lapa has recently benefited from joint efforts by city hall and residents to renovate the area and increase security in some of its problem spots, and so has recovered a good bit of its delightfully boho character – and maybe then some, becoming quite the hotspot for hipsters, hippies, and visitors to Rio thanks to its very carioca (local) and cosmopolitan vibe.Foremost among the abovementioned landmarks is the Carioca Aqueduct (top, aka the Arcos de Lapa), a large white structure dating back to 1750 which since 1896 has instead of water supported a tramway which these days is a popular tourist attraction.

Surrounded it are charming little streets and pastel colonial buildings with elegant balconies, among which chic cariocas love to sit at outdoor cafés nursing chopps (frosty draft beers); enjoy samba at local clubs; and browse the antiques shops especially along Rua da Lavradio (a street which also hosts a cool open-air market the first Saturday of every month).

Of more recent vintage is one of Lapa’s more colourful corners, the Escadaria Selarón (above). This 215-step outdoor staircase was renovated beginning in the 1990s by the late Chilean artist Jorge Selarón, who transformed it into an intricate symphony of blue, green, and yellow tiles (the colours of the Brazilian flag) which these days attracts flocks of cariocas and visitors alike and has been featured in all manner of music videos as well as TV shows such as The Amazing Race.

Other notable spots include the Sala Cecília Meireles on Largo da Lapa; it’s a popular and classical music venue which marks its 50th year in a lovely edifice built in the late 19th century as the Grande Hotel da Lapa. It’s one of the stars of the nightlife for which the neighbourhood is especially well known. One good place to enjoy Lapa after dark is along the Avenida Mem de Sá, which on weekends as of 10 pm is cleared of traffic to let cariocas enjoy a street party and bar- and restaurant-hop to their hearts’ content.

For example, one excellent option is a dinner of cabrito com arroz (roast kid goat with rice and beans) and bolinhos de bacalao (cod fritters) at Nova Capela (Mem de Sá 96), which stays open till the wee hours. Or down the street, head to the Bar Carioca da Gema, right next to a samba club of the same name, for a delicious shiitake pizza. More informally, there are also plenty of street stands, such as the bunch you’ll find on weekend nights around the aqueduct, slinging everything from Brazilian barbecue to yakisoba (Japanese style buckwheat noodles).

Besides scores of eating opportunities are scores more for drinking and dancing. One of the pub classic hereabouts is the Casa da Cachaça (Mem de Sá 110), an unpretentious little hole in the wall full of bottles and intense local atmosphere. Music is all over the place, with standouts including Circo Voador (“Flying Circus”) on Rua dos Arcos, with a variety of Brazilian music and dance performances as well as international headliners, and myriad samba joints such as Clube dos Democráticos (Rua Riachuelo 91). On Rua do Lavradio, which besides its cafés and antiques is another nightlife hub, Rio Scenarium was called by the U.K. Guardian one of the world’s 10 best nightspots, a three-story colonial-era townhouse with great Brazilian fare, a very eclectic crowd, and music/dancing that’ll knock your socks off (maybe better not to wear socks).