I’ve always had a thing about the quirky little corners of this continent that’s famously a patchwork of ethnicities and accidents of history, and there are a few bits and pieces scattered across Europe that are quirkier than others. They range from some some you’ll recognize and know something about to some you’ve probably never heard of. I’ve visited many, while several others remain on my bucket list. What intrigues me so? Maybe it’s simply the allure of the under-the-radar and off-the-beaten path in an era where so much seems pick-over and homogenized (even though, to be fair, a few of these places are hardly completely untouristy).

Ensconced in the Pyrenees Mountains between Spain and France, this gorgeous land of just 468 square kilometres (181 sq. miles) remains by a quirk of history a principality, officially headed jointly by the president (succeeding the king) of France and the bishop of Spanish Catalonia’s Catholic diocese of Urgell, but run by a parliamentary system. The main town, Andorra la Vella (top), is a bit of a consumerist bustle, thanks to tourism and duty-free shopping that pulls people in especially from Spain; skiing and other winter sports are actually a bigger draw these days, at resorts like Soldeu, Pas de la Casa, and Arinsal. But once you get beyond that, what I most love about Andorra is exploring the spectacular scenery and gorgeous medieval villages such as Ordino (above left) and Meritxell (and if you heart the Romanesque like I do, this is a must).

“Champion of Italy,” basically a 160-hectare (half-square-mile) chunk of Italy surrounded by the Switzerland canton of Ticino, is a neat little town of 2,300 across Lake Lugano from the city of Lugano, operating pretty much entirely under Swiss jurisdiction (Swiss francs, no European Union VAT, and so forth). The old town has cobblestone streets and a couple of fine old churches, the Madonna dei Ghirli in Campione and San Zenone.

The main event, though, is the big, glitzy Casino di Campione, situated here to take advantage of the town’s unusual status. In addition to the usual wide range of high-stakes gambling, it has performance venues that host all manner of European and world headliners, fashion shows, and festivals all year long. Naturally as a result of this you’ll also find a good selection of nearby restaurants and bars in town. You can get here overland from Como, bus from Milan, or by ferry and train from Lugano. 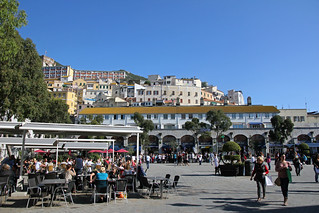 Though “The Rock” (aka Gib) has been British since 1704, the 30,000 locals are a bilingual, multi-ethnic mix mostly based on Andalusian stock. It’s an odd place to visit, for sure. If you don’t fly in directly, you enter from the Spanish town of La Línea – driving or walking across the airport runway! It certainly feels different from surrounding Spain, with trappings of Britannia like pubs (some now somewhat self-consciously dressed up for tourists) and red phone booths.

Granted, since I first visited in the 1990s, the local government has renovated the airport and a bunch of other stuff (with more in the works) with an eye toward the tourist trade, such as creating Grand Casemates Square (above left).  Highlights include the Great Siege Tunnels, St. Michael’s Cave, and the Apes’ Den, an area that’s home to the famous Barbary Apes – of which it’s said that Gibraltar will remain British as long as they’re here (these days there’s actually an overpopulation of them, and they’re cheeky little critters who will steal your camera and other stuff, so watch out!).

With a population of about 63,000, here’s a British territory (well, officially a “bailiwick” or “crown dependency”) a bit closer to home – just off the coast of Normandy, France, covering the island of Guernsey and several others including Sark (Europe’s last quasi-fiefdom, pop. 600) and Alderney.

The culture is French-influenced, including a local dialect of Norman French called Guernésiais (ever dwindling with the older generations, though), and the local system includes its own currency and legal system. There’s an airport and ferry service from both France and the U.K. Highlights: Neolithic sites;  World War II German occupation museum; majestic Castle Cornet; medieval Guersey Tapestry; Hauteville House, onetime residence of author Victor Hugo (fun fact: we have Guernsey to thank for Les Miz – Vic exiled himself from the régime of Napoleon III and wrote Les Misérables here).

Here’s another British Crown dependency (pop. roughly 85,000), this time roughly halfway between the coast of Scotland and Northern Ireland, its native language Manx, a form of Gaelic (it’s co-official with English but no longer widely spoken), and its parliament the world’s oldest continuous governing body.

These days the Isle of Man is a semi-autonomous tax haven which also does a low-key tourism business, with highlights such as doughty Peel Castle (left), built by Vikings in the 11th century and ensconced on its own islet; a dramatic neolithic burial site that’s the British Isles’ largest; antique railways; several interesting museums; and quite a few nature spots and agritourism options. And if you’re a motor sports fan, apparently this is one of the world’s top stops on the circuit, especially for motorcycle racing. 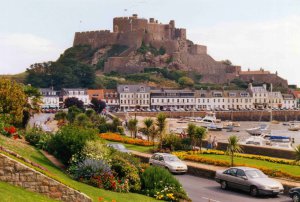 Yet another British Crown dependency (pop. 98,000) very similar to Guernsey in various respects (language, legal system, currency, etc), the largest of the Channel Islands also makes much of its living these days from offshore finance and tourism, along with farming. The landscapes are bucolic, the climate mild, and the towns fetching. A top tourist attraction is the Jersey War Tunnels, built during World War II, which tell the story of the German occupation, but also Neolithic dolmens; Mont Orgeuil and Elizabeth castles; nifty nature reserves and beaches; and much more. In addition to ferries from France and Britain and flights from the U.K., there’s also air service from Dublin, Amsterdam, and Switzerland. And yes, Jersey cows come from here.

Surrounded by Switzerland and Austria, this tiny constitutional monarchy (one of the world’s richest countries), boasts some 35,000 citizens. The Swiss franc is the currency in this tax haven/finance center which also happens to have some pretty cool stuff to offer visitors. That includes spectacular Alpine scenery and sports (Malbun ski resort is actually a bargain compared with the Swiss Alps); historic sites dating back to the Middle Ages including Vaduz and Gutenburg castles (left, in the town of Balzers); the evocative ruins of Schellenberg Castle; a winery and beer breweries; and several fine art and history museums.

Another wee and wealthy constitutional monarchy (though certainly quite a bit bigger than Liechtenstein at 1,000 square miles), this one’s Franco-German and sports a hybrid language of its own, Luxebourgish (reminds me of a cross between German and Dutch), and is wedged between France, Germany, and Belgium.

But it packs a lot of diversity into this petite package, from mountains to rolling countryside, vineyards, forests, and a variety of settlements from the capital city down to bucolic hamlets (no seashore, but hey). Not to mention the fact that it’s the proverbial mouse that roars, punching above its weight internationally in the EU and beyond. There are many dozens of sites to take in, from Luxembourg City’s Cathedral of Notre-Dame and Casemates fortress to medieval Beaufort Castle out in the village of Vianden; sites relating to World War II’s Battle of the Bulge; and the Route du Vin in the Moselle Valley. For such a small country, it can keep you busy for days, and well fed and watered with local specialties as well as French, German, and international goodies (pretty progressive, too; after it legalised gay marriage this year, its prime minister became Europe’s first to have a same-sex wedding!).

The Spanish exclaves of Ceuta, east of Tangier on the north coast of Morocco, and Melilla (left), quite a bit farther east along the coast near the city of Nador, look for the most part like fairly typical coastal cities of Andalusia, with the usual complement of churches, fortresses, monuments, museums, beaches, and so forth, as well as newer developments like fancy port areas.

Though I’m lumping them together here, obviously they do have their differences. Melilla includes something a bit surprising: the largest collection of Modernista (Art Deco) architecture outside of Barcelona. The other fascinating thing here, of course, is the ethnic and cultural mix of European and North African as well as Christian, Muslim, Jewish, and even Hindu. In addition to land crossings from Morocco, you can reach both by ferry from Spain (Ceuta from Algeciras; Melilla from Malaga, Almeria, and Motril) as well flights to Melilla from Madrid. 
Everybody’s heard of this one, obviously – Princess Grace, Ian Fleming, and their ilk made sure of that over the generations. And of course you won’t be surprised to learn that traveling here is not for the faint of wallet (you can help limit the damage a bit by dipping into this ritzy 61-hectare (151-acre) city also known as Monte Carlo whilst based over the border in France, perhaps in Nice, 23 km/14 mi. away). Being so small, it’s a very strollable place, especially its medieval core, Le Rocher (aka The Rock). You can take a tour of the Prince’s Palace and check out the 19th-century cathedral as well as the quite creditable local branch of London’s Marlborough Fine Arts Gallery. If you love fish (the swimming kind), the Oceanographic Museum and Aquarium here happens to be one of the best in Europe, especially when it comes to the Mediterranean. Old auto buffs will flip over the Collection of Vintage Cars put together by Prince Rainier. Then of course the Casino Monte-Carlo is an absolute must, in all its rococo decadence (it’s open 2pm-4am, and depending on the time, you can get in for as little as 10 euros for a look around even if the betting is too rich for your budget). Rising like a fairytale vision from the plains of Italy’s Emilia Romagna, this wee constitutional republic (pop. 33,000) was founded during the 4th century, so the story goes, by a Christian stonemason escaping Roman persecution and through a mix of wiles and luck remarkably has managed to preserve its independence ever since.

There are several hills and towns scattered throughout the territory, with the main (and prettiest and most historic) town located on Monte Titano. It’s admittedly pretty touristy — but it’s also still pretty cool. It won’t take you long to take in the attractions here. You can visit the parliament building, climb the three medieval towers for even loftier views of the surrounding countryside, watch the changing of the guard, check out several churches and museums, enjoy some wonderful Romagnolo food, and just soak up the historic atmosphere. Bellissimo!