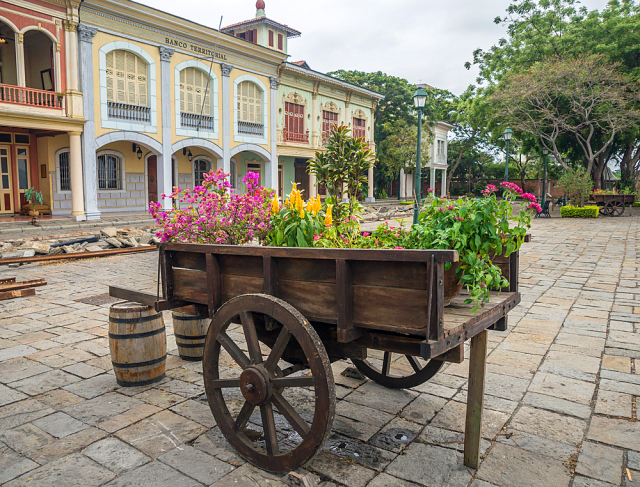 Quick, what’s Ecuador‘s biggest city? If you said capital Quito, that’s altogether a logical guess, but sorry, no cigar. The answer lies not up in the Andes more than 400 kilometres south (a 50-minute flight) near the country’s tropical coast.

You see, Quito may be Ecuador’s political and administrative capital, but its commercial and financial powerhouse is its rival Guayaquil, and the two couldn’t be more different. Yet for all its relative economic might, this port city of some 2 1/2 million, founded in 1538, the way of life follows a more relaxed outlook and rhythm, and locals tend to live more in the streets.

Ecuador’s so-called “Pearl of the Pacific” sits astride the Guayas River, and this waterway has over the centuries been a primary source of Guayaquil’s prosperity as well as shaped its personality – a pattern which continues today, as evidenced by the scores of cargo and cruise ships anyone approaching the riverbank will note.

As befits a city of such lengthy provenance, there’s a historic centre with a number of interesting landmarks and streets to explore. The cathedral, for example, may be an early-20th-century replacement of its predecessor, but it’s nonetheless an impressive bit of of neo-Gotic business right out of central casting. Seminario Park, on which it stands, is home to free-roaming iguanas (harmless, but best not to bug them). Other fine local churches include La Merced (a neo-Gothic/neo-Byzantine mix), San José (1907), and Santo Domingo (one of the earliest, but the current structure dates from 1938). Other elegant, rather European-style architecture such as the city hall, as well as enormouse squares such as Plaza del Centenario and Plaza de San Francisco, filled with pigeons, pedestrians, and buskers. Another worthwhile heritage stop, across from the cathedral is the newish Guayaquil Historical Park, a mix of restored historic buildings dating from just after the great fire of 1896, Ecuadorian wildlife, and customs and folklore of the colonial and pre-colonial era. 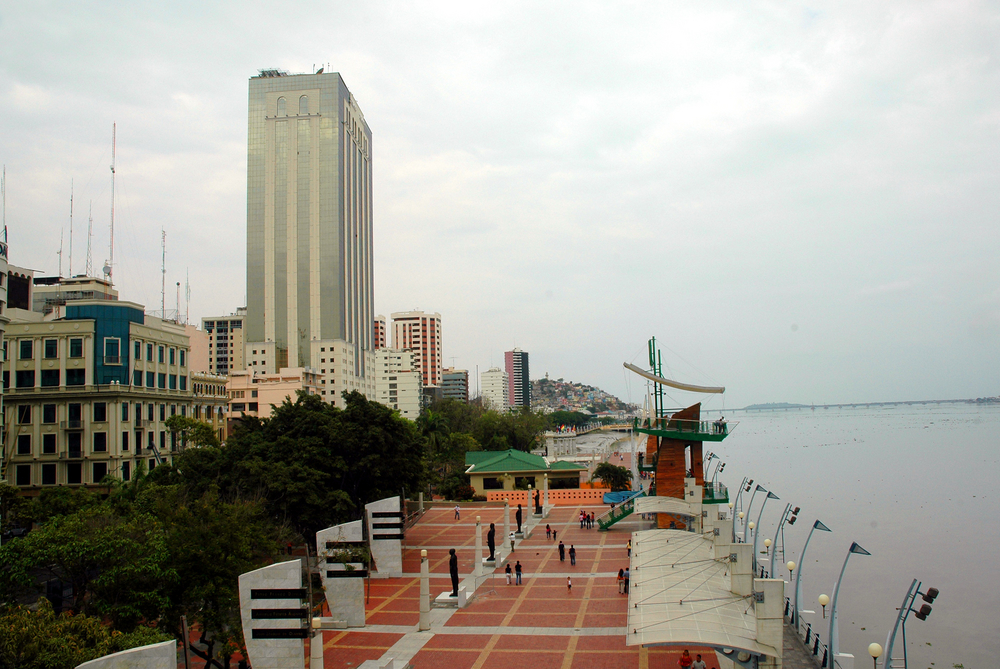 Beyond the above – especially in recent years – the traditional architecture or yore has been supplemented by an increasing number of highrise business and residential towers which have enhanced the city’s modernity and dynamism. Other urban renewal projects, too, such as Malecón 2000 (above), a 2 1/2-km (1 1/2-mile) riverfront boardwalk lined with attractions old and new, including the Palacio de Cristal, an iron-and-glass Belle-Époque market now housing exposition and convention space; the fountain and statue of Guayaquil’s first mayor, José Joaquín Olmedo; the Torre Mudéjar (Moorish Tower, 1842); a column-lined neoclassical monument to South American liberation heros Bolivar and San Martín; and the Museum of Anthropology and Contemporary Art. And of course a hefty number of restaurants, shops, cinemas, and other venues.

It goes without saying, then, than this is a great stretch to absorb much of the city’s essence, as well as browsing a wide variety of merchandise and especially sampling the coastal cuisine, which features a number of differences from the Andean fare farther north. Being coastal, as you would expect, here fish and shellfish are especially abundant and exquisite (as in neighbouring Peru and Chile, ceviche is a big favourite). But other tasty local offerings abound, including menestra (lentil stew) with rice and steak, seco de chivo (stewed goat), fritada de chancho (orange-juice-braised pork), humitas de choclo (similar to polenta), and sancocho (a stew of beef, corn, cassava, and more). Plus of course a cornucopia of tropical fruit for a final sweet touch.

At the end of the Malecón begins the Las Peñas neighbourhood and Santa Ana Hill (above), whose steep stairs are well worth a climb – all 300 steps – for a sweeping hilltop view out over the nieghbourhood’s charming multicolour houses, lively cafés, and creative art galleries, all very picturesque and boho. Of course, those heading up late in the day could convceivably never make it to the top – not because the climb is tough but because of all the watering holes on the way up, tempting with all manner of refreshing brews or prehaps a tot of the very good local rum! Those up for more action of this sort after dark might want to consider another, newer river walk, the Malecón del Salado, a fetching mix of eateries, and green spaces (and don’t miss the “dancing fountains”).

Yes, Quito is neato, but Guayaquil – especially these days – is well worth the time of any visitor to Ecuador.