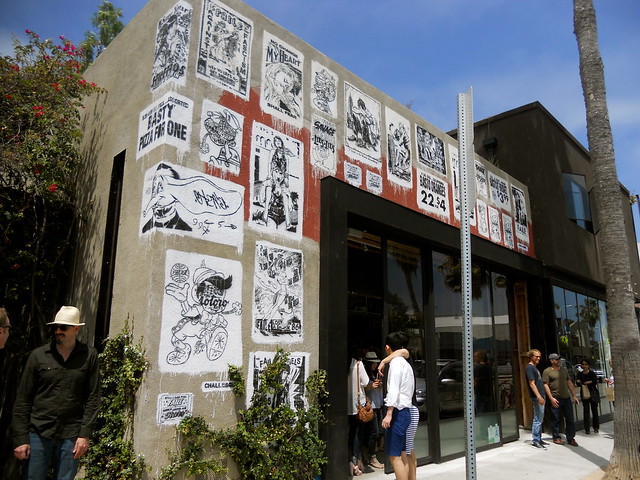 Ah, El-Lay, la-la land of dreams – yet, like many huge cities, a collection of sometimes very different, very special neighbourhoods. And in Los Angeles, few are more “special” than Venice, founded in 1905 as a resort town and these days known for its carnivalesque beachfront boardwalk. Increasingly, though, another thoroughfare has been making a name around here, one named after the developer who essentially invented this supremely singular spot.

Abbot Kinney (1850-1920) sought to endow Southern California with its own mini version of the spectacular Italian city of canals, constructing a half dozen that are still evident today. And several blocks inland from the these canals as well as the beachfront is one of Venice’s main thoroughfares, named Albert Kinney Boulevard, which has become one of LA’s “it” destinations. The area’s postwar and contemporary architecture has contributed to the vibe. Some is due to the celebrated pair of designers Charles and Ray Eames, who had their HQ in the postmodern, red-brick Bay Cities Garage at No. 901. Perhaps the biggest icon of the present day hereabout is the Binoculars Building, (340 Main Street), dating from the early 1990s and designed by Frank Gehry (yep, the part over the main entrance is in the shape of a giant pair of black binoculars; corporations in residence include advertising giant TBWAChiatDay and Google).

The scene originally jump-started in the late 00’s with the opening of  hip, German-inflected 3 Square Café/Röckenwagner Bakery (at 1121), and another of the many nifty spots which has joined it (in 2011) is Chicago-based Intelligentsia Coffee (1331), designed by MASS Architecture & Design, where a gooey cinnamon roll and full-bodied Black Cat Expresso come with a scintillating side of hip people-watching amid industrial-chic surroundings (another is Abbot’s Habit, below, one of the area’s earliest pioneers, from the 1990s). 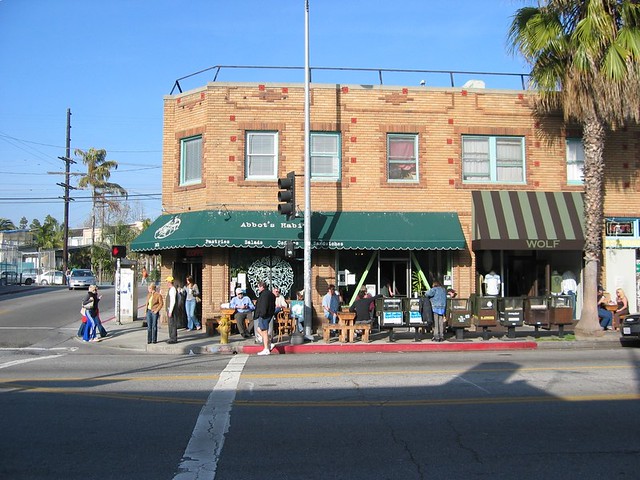 Suitably caffeinated, you can spend hours browsing the cool stuff from local artists and artisans at an indoor/outdoor bit of business called Altered Space, as well as galleries such as Kana Manglapus Projects.

Come nighttime, the action heats up with the creative natural cookery of spots such as Axe and Shima, as well as Gjelina (top), a hotspot with hot people as well as delectable gourmet wood-oven pizzas. And if you can coordinate your visit for the first Friday of the month, by the way, by all means do so – it’s a festive block party featuring food trucks and every business open till the wee hours.

Word has it, by the way, that nearby Rose Avenue, is on deck to be the next Venice hotspot, but although Rose plenty fetching, with establishments such as Cerveteca (523 Rose Ave.), which serves a mean hot dog and microbrew. But Abbot Kinney is still deservedly king of the scene.

Best fares to Los Angeles from the U.K., from Spain.