As in many countries, Spaniard like to especially roll out the tasty treats around the holidays, with all manner of mostly sweet delicacies that help reinforce that festive feeling around this time of year. Here are some of the season’s greatest hits…

At the top of this luscious list is of course turrón, the rectangular slabs of nougat of Moorish origin which come in various textures and flavours and dates back to at least the 15th century and undoubtedly earlier. One of the most iconic is Alicante, made of whole almonds embedded in a hard mass of egg whites, honey, and sugar; another is Jijona, where the almonds are turned into a dense, somewhat oily but oh so tasty paste. Personally, a particuliar favourite of mine is Yema, which also involves almond paste but is made more marzipan-like with the addition of yemas (egg yolks). Plus, in this day and age, of course, various other non-traditional turrones have also sprung up, including popular flavours like chocolate.

And speaking of marzipan, this almond-derived treat is a pretty big deal all over the Iberian peninsula, in various shapes and varieties. That includes polvorones (above), specialities of Andalusia as well as Toledo; the panellets of Catalonia; Alicante’s neulas; mantecadas and pestiños from Andalusia and Extremadura; Andalusia’s pastel de Gloria and pan de Cádiz; guirlache in Aragón; casadielles from Asturias; and the Basques‘ intxaursalsa and goxua. Then there are peladillas, not paste but rather candy-coated whole almonds from Valencia, and sopa de almendra (almond soup), a favourite in Madrid. Confections based on dates are also high on the list. 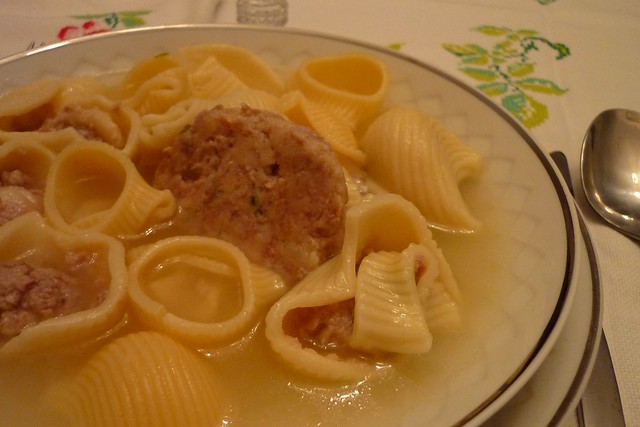 It’s not just sweets that take the cake, though. I remember from my college days singing a Basque song “Gabon, Gabean”, which mentioned “bacalao y de lo mejor” (cod and all the best). Nochebuena (Christmas Eve) brings the season’s central meal, and cod dishes are especially traditional in the north of Spain – not just in the Basque Country but also nearby Galicia, where cod with cauliflower is a typical for Nochebuena dinner. In Castile and other areas, cochinillo (suckling pig) is a hearty winter dish that’s particularly popular during Yuletide, as are lamb, shellfish, and poultry including chicken, turkey, and capons.

Catalonia also has a Christmas version of its typical escudella soup, broth with several kinds of meat and vegetables, a pilota (seasoned meatball), and galets, large, snail-shaped pasta. It’s served alongside a tray of carn d’olla, the meats simmered in the soup.

The parade of goodies continues through New Year’s, of course. On New Year’s Eve, the tradition in Spain is to down 12 grapes, one for each stroke of midnight, while the first of January the thing is to have hot chocolate and churros (sugar-sprinkled fried dough), either at home or out.

We also can’t leave out the treat that caps off the season, on the proverbial Last Day of Christmas, January 6, which in Hispanic countries is called Día de Reyes (Three Kings’ Day, after the magi), The roscón de reyes is a doughy ring of cake studded with candied fruit.

To wash it all down, the season’s libations part excellence include cava (Spain’s answer to Champagne, courtesy of Catalonia), and non-alcoholic sparkling sidra (cider) from Asturias.

All delicious from soup to nuts – but perhaps by January 7 a wee bit of a diet is in order! 😉