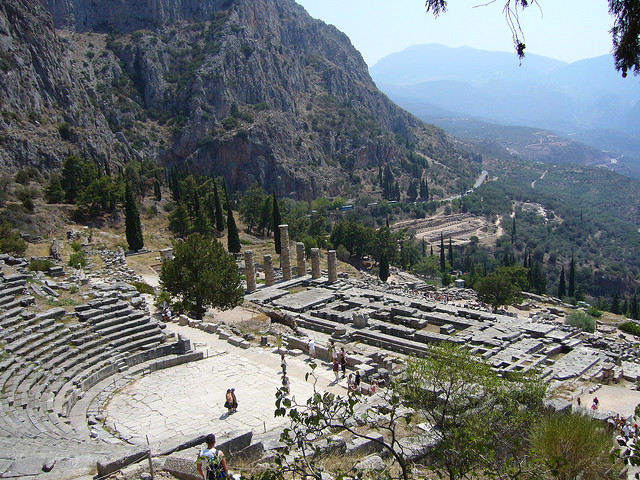 The Acropolis, the Plaka, and the rest of Greece‘s compelling capital are a treasure chest you could rummage through for days on end. But just as important to this ancient country and culture are sites out in the hinterland, where the air is purer and in many cases life is still simpler. Here are the top 4, all within 180 kilometres (112 miles) of Athens.


Corinth  The closest-in at just 80 kilometres (48 miles), this ancient city on the Pelopponese peninusla is home to a notable temple of Apollo and acropolis. But perhaps its most impressive landmark isn’t ancient at all. It’s the nearby Corinth Canal, a short waterway that cuts through the isthmus to connect the Aegean Sea with Ionian Sea – attempted in antiquity but not actually constructed till the late 19th century, a great engineering feat that still impresses today, watching ships pass through the deep, narrow channel (at 21 metres/70 feet, too narrow, in fact, for most modern commercial vessels).

Mycenae  A bit farther afield, some 120 kilometres (75 miles) southwest of the capital, lie one of the most important sites in the history of Greece – and arguably all of Europe. This was the centre of Greek civilisation as far back as 1600 BC, well before the classical Hellenic period, and one is accordingly awestruck gazing upon Bronze Age remains such as its iconic Lions Gate (right), the citadel, and the royal tombs.

Epidaurus  About the same distance southwest (just under two hours’ drive), this area is especially known for its spectacular outdoor amphitheatre dating from the the 5th century BC, designed by the noted architect Polykleitos the Younger. Its excellent state of preservation and acoustics is such that performances are still regularly held here today. Other fascinating sites to explore here include the sanctuary of Asklepius, the demigod devoted to healing, an archaeological museum, and a sport stadium.

Delphi  Farthest out of our featured excursions, a bit over 2 hours’ drive northwest, on the slopes of Mount Parnassus, this site was considered by the ancient Greeks to be the centre of the world. Besides a breathtaking setting with equally stunning views over the valley and the sea, there’s a small town here and an archaeological site, with a temple of Apollo, a stadium, and an amphitheatre (top). And it’s worth a side trip another 24 kilometres (15 miles) away, to a valley filled with almond and olive trees, where Hosios Loukas Monastery, dedicated to St. Luke, a 10th-century hermit born in Delphi, is full of frescoes and mosaics impressively reminiscent of Istambul’s Aghia Sophia.

The currency is the euro.