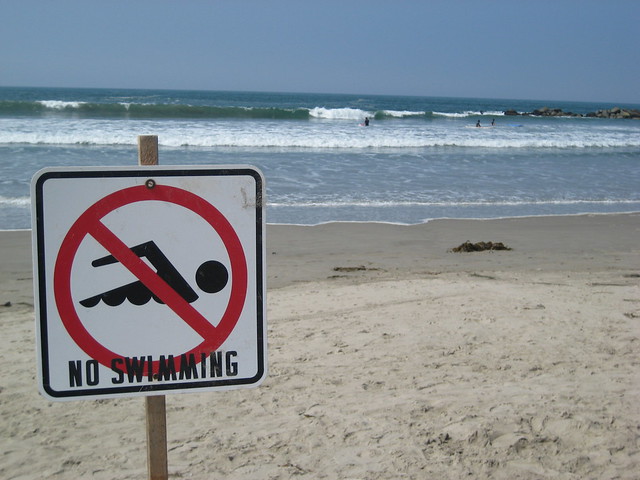 Whether it’s a summer holiday or a winter escape, beaches are a no-brainer when you need to get away for some minimally dressed relaxation and fun. But there are also certain precautions that you should take in order to stay safe. The beach is no place for stress and worry, so heed the following tips and avoid unnecessary risks.

Some of us prefer the sea, others inland lakes and rivers. And fresh and salt water have significant differences when it comes to questions of tides, currents, contamination, and microbes. Freshwater lakes, rivers and ponds can host certain parasites, like schistosomiasis (aka bilharzia) and flesh-eating amoebas, not found in salt water.  Avoid warm, stagnant bodies of water, which are prone to bacterial blooms and other harmful micro-organisms such as amoebas. In addition, try to keep your head above water when swimming in fresh water, and if you do go under, close your mouth and pinch your nose shut. Finally, avoid stirring up too much sediment on the bottom of rivers, ponds and lakes, which can increase your risk of exposure to bacteria.

Salt water is less prone to bacterial blooms, but if it’s warm enough, it will harbour some bacteria species which can cause infections, especially via open cuts or sores (one, vibrio vulnicifus, has just been the subject of health warnings in Florida).  Outbreaks typically occur in specific areas, so I’d strongly recommend you check with the relevant local authorities at your destination to see if there are any water health advisories in effect.

And whether you are swimming in freshwater or saltwater, avoid getting in the water with any open cuts or sores. And be sure to thoroughly rinse yourself when you’re done swimming. 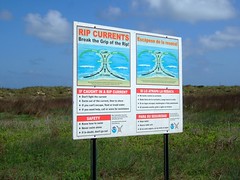 Oceans present another issue in the form of rising and falling tides, and undertows which can knock you off your feet. Knowing when tides come in and out is an important aspect of water safety, and many beaches where there are breaking waves can also have rip currents (some people also call them rip tides) moving away from shore, that can be hazardous to swimmers who panic in reaction to them or try to fight them. While freshwater bodies lack tides, in some rivers you still need to pay attention to currents, which can be affected by multiple factors, including weather. Especially in areas without lifeguards, and especially if you’re a non-swimmer or novice swimmer, never underestimate rough surf or fast-moving water.


In this day and age, sadly, pollution is all too often a problem, as well. The health of the oceans and coral reefs is increasingly under stress over wide swaths of the planet, but some beaches locally have been more susceptible than others to disease-causing bacteria from sources like local sewage runoff, and not just on the ocean; this can be even more of a problem in more contained bodies of water like lakes, ponds, and rivers. Again, check with local tourism and health authorities before leaving home.

In fact, that advice goes for every aspect of swimming: Researching your destination ahead of time and following up with specific local advice, will help you better understand the possible risks.

Where the Wild Things Are

When it comes to wildlife, most people are preoccupied with a certain type of large predatory fish. Sharks can indeed be dangerous, but despite increased publicity especially of late, shark attacks are really quite rare, and there are many more pedestrian threats lurking. Jellyfish, spiny sea urchins and sharp coral are responsible for countless more aquatic injuries. Jellyfish in particular merit caution, because they are numerous, on the rise throughout the oceans thanks to climate change, and deliver stings that range from annoying to fatal (more people die every year from them than from sharks). The Portuguese Man o’ War (right) is a common example in various parts of the world, which won’t kill you but does pack a painful punch.

And it’s not just saltwater which harbours potentially dangerous wildlife. The most legendary example is probably the Amazon River piranha. But actually, while there have been recorded attacks on humans and even deaths from these toothy but rather small fish, their reputation has been greatly exagerrated, with incidents rarely resulting in death, and in any case tending to occur during dry seasons when water levels are low and the fish are more concentrated in their river environments.

But perhaps the other most problematic critters in the water besides jellies are crocodiles, found in rivers and lakes throughout Asia, Africa, and Australia. They’re are fast, can be hard to spot, and you’ll want to avoid taking a dip around areas where land animals come to drink, because that’s where crocs are more likely to be lurking in wait for them.

Most other potentially “dangerous” animals you might encounter in watery situations are, as they say, more scared of you than you are of them. They would include varieties of snakes and eels – for example, sea snakes such as blue-and-black -banded Belcher’s (northern Australia and southeast Asia); moray and electric eels (the latter of which aren’t true eels); and water moccasins in the southern United States (you can recognise them by the way they swim along the surface of the water). Most of the above are quite shy, and only attack in self-defense or if startled. Same goes for other toothy or venomous fish you might encounter while snorkeling, such as spiny lionfish or barracuda (in the case of the latter, you might want to make sure not to wear any jewelry underwater; it might glint, thus resembling the silvery flash of a fish a barracuda might want to have a chomp at).

In general, when it comes to wildlife, it’s very important to respect certain boundaries. Whether you are swimming, snorkeling or scuba diving, do not touch any animals, do not make aggressive movements towards any sea creature, and it’s not a good idea to poke about underwater nooks and crannies, the likeliest places to find such creatures hiding out. Above all, be sure to solicit and pay attention to local advice about about where and where not to swim and how to conduct yourself in the water. Water provides the perfect medium for a variety of fun activities. Many of these activities have do carry a certain amount of risk, so it’s critical that you know what you’re doing training beforehand (for example, scuba diving requires certification from a licensed dive instructor, with classes and examination including both practical and theoretical elements). Regardless of the activity, you should also not go off on your own. Use the buddy system and sign up for activities offered by reputable tour operators with proven safety records.

And when you go out on these activities, whether it’s kayaking, canoing, surfing, snorkeling, diving, or motorised water sports (more about them below), please avoid doing so after taking in alcohol or any other mood-altering substance – as tempting as it may sometimes be since you’re on holiday. Coordination and judgment can be severely affected, and in a medium where drowning is always a risk, you particularly need to have your wits about you.

Another particular dicey area is motorised water sports. This especially includes those increasingly popular “personal water craft” in many resort areas these days with brand names like Jet Ski, Wave Runner, and See-Doo. These are certainly lots of fun, and quite easy to operate for people with no experience, but they’re also serious machines weighing hundreds of pounds and reaching speeds of up to 65 miles per hour (105 kph). Careless driving has resulted in severe injury and death, both for operators and for people in the water. And in the case of these water craft as with more conventional motor boats, alcohol is sometimes a factor. In either case, as on land, never drink and drive.

When it comes to all the above, the last thing you want to do on vacation is have to head to a medical center because of a water-related injury or accident. Research your destination ahead of time, take note of specific aquatic risks and be prepared to follow advice from reputable sources on the ground. Don’t overextend yourself and avoid the avoidable: steer clear of any wildlife, and also, as I pointed out in this blog last last week, watch out for the sun, too!

One final word: Please don’t let all this scare you! In life there are risks in getting out of bed and driving down the street. The key is to understand what’s out there and mitigate them as much as you can. That way you can enjoy your holidays in safety and with true peace of mind.

Phil Paoletta lives and travels in West Africa, where he teaches camel drawing while running a small restaurant in Abidjan, Ivory Coast. You can follow him at PhilInTheBlank.net, and he also offers travel health advice on his site SickOnTheRoad.com.