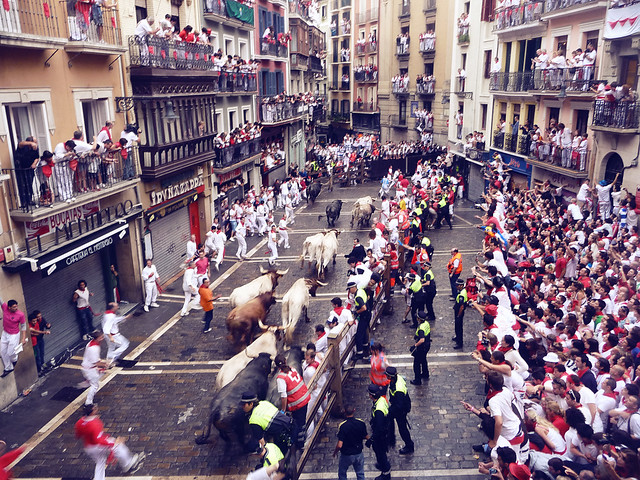 And they’re off! The handsome, historic capital of Navarre is once again in the midst of its annual close-up on the world stage as the San Fermín festival, with more than a million visitors come to join the fiesta until it staggers to a close on July 14th.

If you didn’t know better, be excused for thinking that it’s all about the encierro (running of the bulls). After all, this is indeed a big, exciting, and photogenic part of the festivities – the famously adrenaline-pumping, 3-minute sprint at 8am each morning in which hundreds of people sprint ahead of a dozen rather amped-up bovines through the streets to the bullring (deaths are not unknown – the last one was in 2009).

But there’s quite a bit more to the Sanfermines than that. Other cool daily events include a parade of gigantes y cabezudos (giants and big-heads), caricaturesque traditional figures; traditional Basque sports like stone-lifting (for those of you who don’t know this, Navarre is ethnically Basque even if it’s not politically part of the Basque country); fireworks; and of course bullfights. In addition, there are one-off rituals such as the St. Fermín procession, when the statue of the saint (which along with St. Francis Xavier is the patron of Navarre) is paraded through the streets; El Struendo (“The Roar”), so named because it basically consists of a crowd making a ruckus in the Plaza Consistorial outside the city hall (below) with drums, whistles, and anything else they can lay hands on; and the closing event, when everyone gathers in the same spot to wave candles and sing pobre de mí (“poor me”) because the fun is over for the year. All of the above, of course, is lubricated with copious amounts of wine, beer, and other strong drink. Called Iruña in Basque, this ancient city dates its founding to a camp of the Roman general Pompey (the name Pamplona deriving from the Latin Pompaeolo). The Old Town is a compact mix of the medieval through Belle-Époque. Highlights include its impressive Ciudadela (citadel), a Renaissance-era fortification that’s now a park and exhibition space; the Cathedral of Santa María la Real, with a Gothic interior (including a wonderful cloister) and Neoclassical façade; and the Museo de Navarra, with archaeological, art, and ethnological exhibits housed in a 16th-century onetime hospital for pilgrims on the Way of St. James to Santiago de Compostela, for which Pamplona was a major way station.

The Old Town’s main square is the Plaza del Castillo, full of restaurants and outdoor cafés. If you visit, you have to make sure to stop off at the most famous of these, the Café Iruña, whose delightful 1880s Belle-Époque atmosphere is still very much a charmer; you’ll notice in here a statue to writer Ernest Hemingway. This was his favourite local watering hole, as he came here several times in the 1920s, and it was his resulting classic novel The Sun Also Rises that really put the San Fermín festival on the world map.

The streets surrounding Plaza del Castillo, such as Calle San Nicolás, Calle San Antón, Calle Estafeta, and Calle Navarrería, are lively lanes chock-full of pubs and restaurants offering both full menus and savoury selections of tapas and pintxos (the latter being snacks with different ingredients attached to slices of baguette with toothpicks). If you’re looking for treats that are a bit more elaborate/upscale, the top restaurant in town has long been Michelin-starred Europa (Calle Espoz y Mina 11), with a gourmet take on Basque cookery.

In the surrounding area, also worth a visit are the Fundación-Museo Jorge-Oteiza, a museum based in the home of the late Basque artist dedicated to modern Basque art as a whole, and the medieval town of Olite, with some incredibly evocative Romanesque and Gothic architecture – including an imposing castle that contains a parador (inn) where you can overnight.

And that’s no bull.