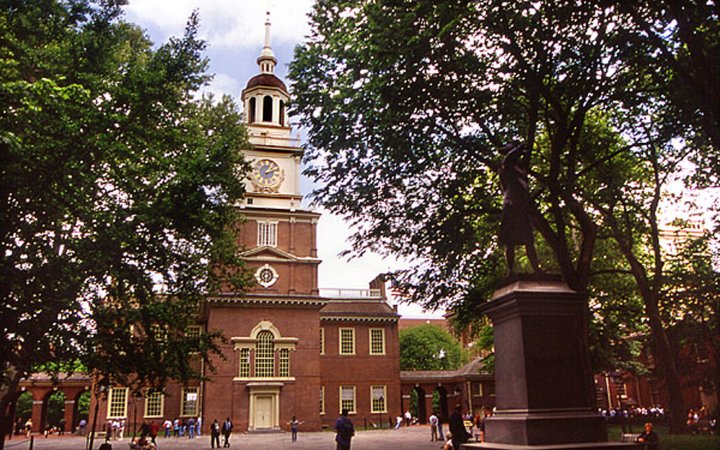 When better than the USA’s Independence Day to visit the city (a couple of hours by road and rail from New York City) the locals fondly call Philly, where this country came into being in 1776? The evolution of the “City of Brotherly Love” founded by Quakers in the 17th century has in the centuries since endowed it with a huge, vibrant menu of offerings, from that historic colonial core to vibrant multicultural neighbourhoods – and some pretty trendy ones, too.

What most visitors come for, of course, is the Old City, the core between 6th Street and the Delaware River, with the leafy cobblestone streets and red-brick row houses that make you feel like you’re on a period movie set. Here’s where you’ll find Independence Hall (birthplace of both the Declaration of Independence and the U.S. Constitution), the complex that today houses the Liberty Bell, the Betsy Ross House, Benjamin Franklin‘s print shop, and more. There are also plenty of galleries and shops to poke around in – and for sustanance and refreshment, I highly recommend a stop at City Tavern, an extremely atmospheric recreation of a 1773 tavern.

Moving just a bit west, we find ourselves in the City Center area, also rich with many landmarks, sights, and cultural institutions. Highlights include elegant Rittenhouse Square; a Chinatown which actually is a cross section of Asia; the handsome Victorian-era Pennsylvania Academy of the Fine Arts; the Reading Terminal Market (a historic rail yard turned into an enormous food and crafts hall); and the city’s performing arts and highrise business districts.

Apart from all the above, there are also some funky neighbourhoods well worth a visit. If you’ve heard of the famous Philly cheese steak sandwich, for example, the source is the Italian precincts of South Philly, with top spots including Pat’s King of Steaks and Geno’s Steaks in the neighbourhood of East Passyunk. Also down here are Bella Vista‘s Italian Market; the Mario Lanza Museum, devoted to the native son who became one of the 20th century’s greatest operatic tenors, and the Mummers Museum, all about the unique and historic clubs which stage elaborate costumed New Year’s parades.

There are a passel of other amazing museums for all interests, as well including the Philadelphia Museum of Art, one of the USA’s premier fine arts institutions (and the famous statue of Rocky outside it); the suburban Barnes Foundation, one of the world’s premier showcases of French Impressionist and post-Impressionist art; the Rodin Museum, with the largest collection of the French sculptor’s work outside France (including one of his best known works, The Kiss); the National Museum of American Jewish History (who knew?); and many more.

Today’s events in Philadelphia include a parade, festivals (including one involving all-you-can-eat ice cream, yum), ceremonies, concerts and of course many de rigueur fireworks. But as all the above hints at, it’s clear that Philly is phab all year round.

image | B. Krist for Visit Philadelphia