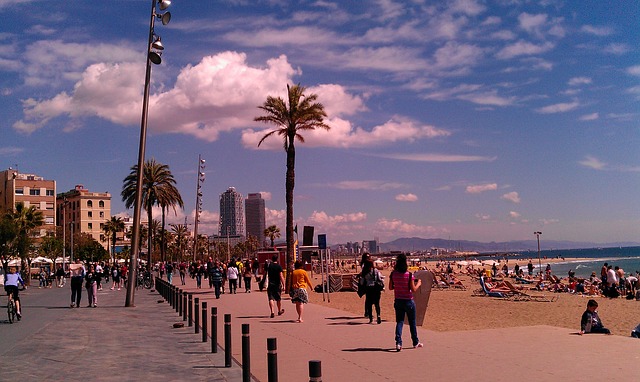 Barcelona never fails to excite, particularly in the summer, when it boasts one of Europe’s liveliest big-city beach scenes (and with a bit of sizzle, too, including not just family zones but also gay and even nude sections). And ground zero for aquatic antics is the Barceloneta neighbourhood, which sure has come a long way, baby. Up until the 18th century, the waterfront area of the Ciutat Vella (Old City) was a rather slummy part of town where death rates were high, but since a massive makeover for the 1992 Barcelona Olympics, it has become quite the smart destination, between its sandy beach, seafood restaurants, and several attractions – all the while managing to preserve some sense of its traditional maritime, seafaring flavour.

It is best to walk here through Las Ramblas or take the metro to the Barceloneta station. Passeig Joan de Borbó welcomes you with its atmospheric outdoor cafés and restaurants. You can also visit the enormous Palau del Mar building, which is an old port establishment that’s been converted into the Museum of the History of Catalonia.

The inner part of the neighbourhood is an oasis of tranquillity, with clothes lines hanging from building balconies. Several façades are particularly worth a look, such as Magí House (Balboa 14), Josep Torrás House (Baluard 6) and Lluis Cairó House (Paredes 6), as well as buildings including the Modernist brick Cooperativa La Franternitat, now a public library. Without even noticing, you’ll suddenly find yourself at Pompeu Gener Plaza and Sant Miquel del Port Church, mixture of Baroque and Neoclassical. Where hubbub awaits is at the neighbourhood market, with a modern extension that doesn’t ruin its original, traditional ironwork architecture.

And what if you’re hungry? Your best bet is to head to a traditional tavern, such as Vaso de Oro (Balboa 6), La Bombeta (Maquinista 3), Can Ramonet (Maquinista 17) or Can Solé (Sant Carles 4). If you’re looking for a more elaborate meal that won’t break the bank, one good option is La Mar Salada (Passeig Joan de Borbó 58), which serves top-quality rice dishes, mussels and anchovies.

Now it’s time to put your feet in the sand. You simply musn’t miss an afternoon of sun and sea. Bathe in the Mediterranean sunshine and take a stroll along the 1,100-metre-long swath of shore. Just one look around through the history of Barcelona: a mix of 18th-century buildings, 60’s apartment blocks, and modern highrises such as the Mapfre Tower, the Hotel Arts, and the much-buzzed-about Sail Hotel, designed by Ricardo Bofill. If you’re looking for something more active to do, head to the Centre d’Esports and try your hand at some sailing; for something more laid back, relax and unwind at the thalassotherapy centre in the Complex Esportiu. Don’t miss a stroll along the promenade amongst the spellbound tourists, rollerbladers, skaters, and cyclists. Have a beer and watch the sun set next to L’Estel Ferit, a sculpture made of iron and glass by German artist Rebecca Horn which portrays a wounded shooting star.

If daytime in Barceloneta is fun, after dark it’s possibly even more so. Head to Absenta (a cosy, boho, and somewhat mysterious joint where you can catch some jazz, sample some Argentine empanadas, and yes, partake of the legendary Green Fairy, aka absinthe) and Leo Bar (with photos of the famous Seville flamenco dancer Bambino on the walls, flamenco in the loudspeakers and a colourful clientele from near and far), both on Carrer Sant Carles. Barcelona is not what anyone would call a capital of flamenco, but this is just another example of the eclecticism that gives Barceloneta its authenticity even post-makeover.