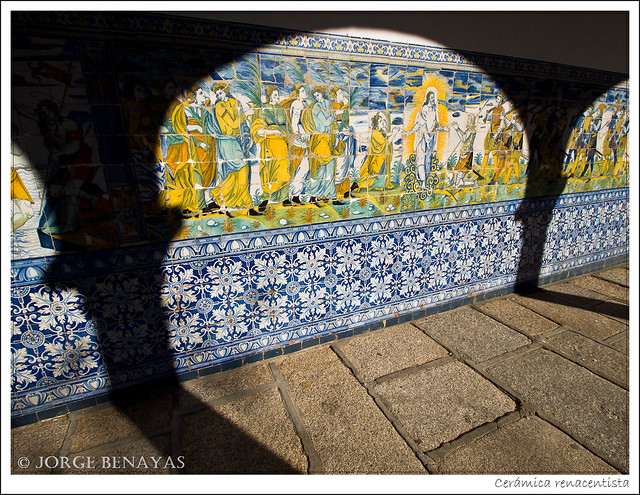 Both Spain and Mexico are known for their rich ceramics tradition stretching back centuries (that of the latter dating back to the Aztecs, Mayans, Olmecs, and other Amerindian civilisations, and on the Iberian peninsula at least to the pre-Roman-Empire Celto-Iberians). But when it comes to brand names, probably the most famous in both countries is that of Talavera, which originates in Talavera de la Reina, an hour and a half southwest of Madrid and an hour 20 minutes west of Toledo (it’s a shorter distance but a smaller road).

The industry in this New Castile city stems from Talavera’s good long time as Al Talavayra, under Moorish rule from the 8th through 11th centuries. The Moors brought their own unique tin-glaze and lustreware ceramics skills and traditions with them, and once the Christians were back in the saddle, they leveraged this into an industry involving a multitude of styles (see below) that reached its golden age in the 17th century but has kept chugging along impressively to this day, achieving influence throughout Europe and spawning, as we’ll see below, an equally influential offshoot in the Americas. 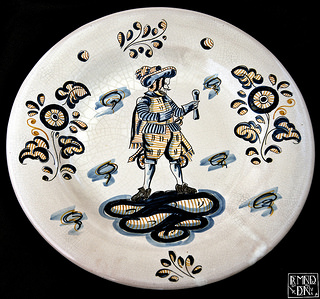 Today in Talavera de la Reina there are plenty of ways to get your fill of it all, starting with a great museum, the Museo de Cerámica Ruiz de Luna, housed in the city’s old San Agustín Convent, which provides a comprehensive overview of this tradition from the Middle Ages onward. The Basílica de Nuestra Señora del Prado (top) is so packed with tilework it’s been dubbed “the ceramic Sistine Chapel”, and the Jardines del Prado park similarly endowed, from benches to bandstand. Shops and factories to buy and watch it made of course abound (a great choice for the latter is Artesanía Talaveriana at Avenida de Portugal 36). 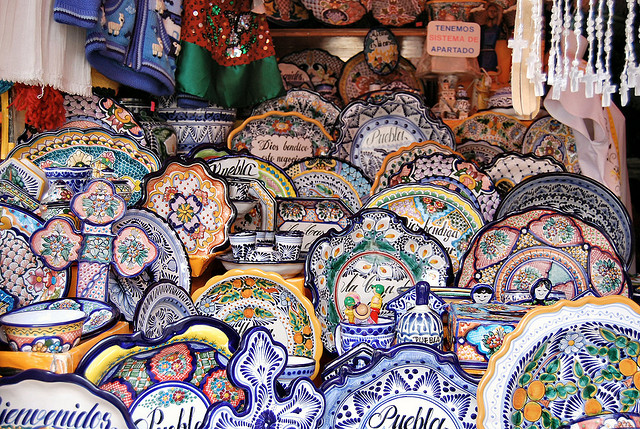 Meanwhile across the ocean blue, shortly after the 1531 founding of the city of Puebla in the Viceroyalty of New Spain, there naturally arose a need for materials to decorate the many churches and monasteries being built. Potters from Talavera de la Reina happened to be among the Spanish immigrants during those early years who helped establish a local earthenware industry that by the middle of the the 16th century had become its own established and recognised style mixing local clay as well as Amerindian and European influences (traditionally just cobalt blue but later adding several other colours); called Talavera Poblana, before long it was spreading throughout Spain’s colonies.

After its own golden age in the 17th and 18th centuries, and its own ups and downs before and after the Mexico’s war of independence and revolution, the ceramics industry ended up in major decline in Puebla by the 1980s. But it’s been seeing something of a comeback in this century, and there are now maybe a couple dozen factories and shops still turning out tiles, dinnerware, bowls, vases, lamps, and all sorts of other things in both traditional and contemporary styles, such as Uriarte Talavera de la Reyna, and Talavera de la Luz.

If you happen to be in Spain or Mexico and don’t manage to make it to Talavera de la Reina or Puebla, you’ll find pieces sold in Madrid, Mexico City, and indeed, various other cities in both countries. But a visit to the source and a chance to see firsthand how these historic and splendid ceramics are crafted is a prime example of how travel can enrich the mind and spirit.